Chivalry over Tokyo: The WWII story of Hap Halloran and Hideichi Kaiho (Part 2) 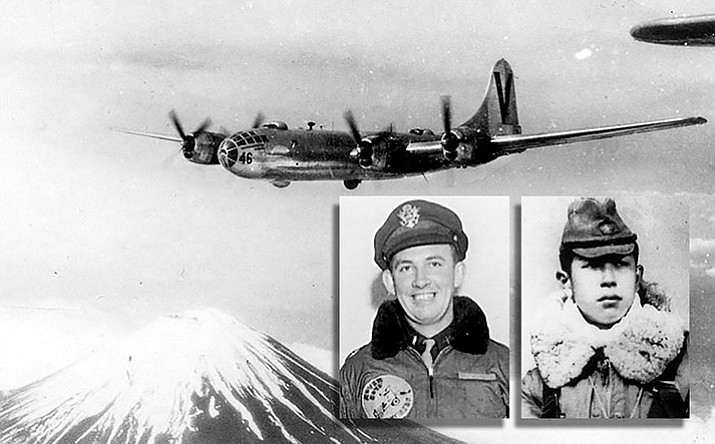 At the end of part 1, 22-year-old navigator Raymond ‘Hap’ Halloran had just bailed out of his B-29 Superfortress after it was critically damaged by a Japanese fighter. He had been trained not to open his chute early because the minus 58 degree temperatures could freeze a man to death during the long descent, and enemy fighters were known to shoot aviators as they descended.

A Floating Target and an Unexpected Gift

In his own words, Hap Halloran explained what happened next: “I fell free until I opened my chute east of Tokyo at about 3,000 feet. The extreme cold at high altitude; the long free fall and shock and fear affected me physically and mentally as I hung in my chute. My landing on enemy soil was imminent. I was frightened. Then I saw three Japanese fighters several miles away at my altitude. They were heading directly at me. I feared the worst. They throttled back and circled very close to me. Two of the planes left. The third plane circled back and came in very close. I could clearly see the pilot as he was abreast of me. Then a wonderful thing happened. He saluted me and flew away. That event was beyond my comprehension at that time.”

The third plane in that formation was flown by Corporal Hideichi Kaiho. His momentary gesture would later have profound impact on Halloran’s life.

Hap Halloran would face a different kind of war when he hit the ground. He was mobbed and brutally beaten unconscious by civilians before being taken by soldiers to a torture prison in Tokyo. He would be confined in dark solitary for months and fed only a small ball of rice several times a day. He would be given no medical treatment. He was later moved to Ueno Zoo in Tokyo where he was a prisoner in an animal cage and tied to the front bars so civilians could march by and view the hated B-29 flyer, beating him with sticks and striking him with rocks. By that time Halloran had lost nearly 90 pounds and was naked and black from non-washing with hair all over his face, and covered with open running sores from flea and bed bug bites.

“Conditions were extreme,” he recalled. “I cried (a form of relief) and prayed constantly.”

He experienced nearly 40 years of nightmares and struggled to cope. But one moment of light kept shining in the darkness, a moment when a young Japanese pilot saluted him as he fell from the air.

“I have never forgotten that day,” Halloran said. “I have always recalled and spoken of this incident in subsequent interviews, speeches, and books. I wanted people to know of this chivalrous act by an enemy pilot. A pilot who saluted me at that critical time in my life, on that cold winter day of January 27, 1945, over enemy soil.”

Almost 40 years later that gesture helped him make the decision to return to Japan in an attempt to begin healing. Through multiple visits Halloran met with, and became friends with both Isamu Kashiide, the pilot who shot down the Rover Boys Express, and Hideichi Kaiho. After the war Kaiho became a well-known aviation artist and gave gifts of his paintings to Halloran. During visits the two elderly men would embrace and speak of how fortunate they both felt to have survived those long ago days of World War II. Hideichi died two days before a planned visit from Halloran.

Halloran recalled, “I was invited by his son, Itsuo, to attend and participate at his father’s funeral on June 23, 2004. I did attend and was led to the casket of his father. I knelt and prayed; then arose and standing at the head of his casket I saluted him. This took place fifty nine years after he had saluted me as I hung in my parachute on January 27, 1945 after our B-29 had been shot down over Tokyo.”

I hope we will all remember that there are good men and women in this world, even amongst those we might think to be our enemies. Love, honor and chivalry are powerful weapons against hate, violence and anger.

Christians are taught: “Love your enemies, bless them that curse you, do good to them that hate you, and pray for them which despitefully use you, and persecute you; That ye may be the children of your Father which is in heaven: for he maketh his sun to rise on the evil and on the good, and sendeth rain on the just and on the unjust (Matthew 5: 44-45).

Mahatma Gandhi taught: “It is easy enough to be friendly to one’s friends. But to befriend the one who regards himself as your enemy is the quintessence of true religion. The other is mere business.”