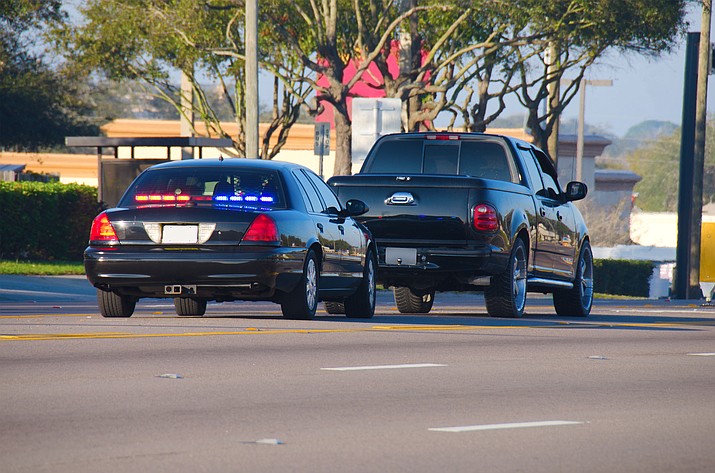 When drivers speed, they often look for police cars and slow down abruptly when they see one.

(This, by the way, is useless if the officer is using radar, because, by the time you move your foot from accelerator to brake the officer already has your speed recorded.)

But what about unmarked police cars? Certainly, most drivers can spot unmarked cars if they have time to look, for example, if they meet at a red light. Seeing them in moving traffic is another thing altogether, as anyone who has been stopped by one will tell you.

Arizona state law allows for police to use unmarked cars for traffic enforcement, Department of Public Safety Capt. G.R. Manera said, and they are “an extremely useful tool in combating hazardous traffic violations.”

In the Prescott area, DPS has both standard, unmarked cars, and so-called “ghost” cars, which have muted reflective decals that don’t show up during the day but are easily seen after dark.

He added that DPS most often uses them “to combat hazardous, aggressive driving.”

Drivers who worry that the red and blue lights of an unmarked police car can be duplicated by anyone who mail-orders them and installs them on an ordinary car have some options if lights appear in their rearview mirror.

“If people are insecure about stopping … we advise them to slow down, wave at the vehicle so the officer knows you acknowledge his presence, and head for a public place that is well-lit before stopping,” Prescott Valley Police spokesman Jerry Ferguson said.

“While doing this, call the police and report your concerns,” said Chino Valley Police Lt. Vince Schaan. “The dispatcher should be able to tell you if the car is from the actual department.”

For the most part, officials said, people understand why they use the unmarked vehicles.

“You consider it a little sneaky, but if you’re doing something illegal and you get caught for it, you don’t really have anyone to complain to but yourself,” said Prescott Valley resident Kim Greene.

But not everyone feels that way, When Prescott Valley resident Arnold Chasteen says it’s unfair, he means it. To his recollection, he has received three traffic citations from unmarked police vehicles in the past five years.

In his opinion, law enforcement officials more effectively cut down on dangerous driving by simply making themselves known.

“Don’t you think it would be better if a cop were sitting there with all of his placards on the side of the car?” Chasteen said. “It would cause everyone to slow down, instead of him just picking one out of a crowd.”

“As the (DPS) District 12 commander, I have never received a call complaining about unmarked vehicles,” Manera said, noting that he drives one himself and makes traffic stops.

“What I usually hear from the violator driver is ‘That is sneaky,’ or “That is not fair – I didn’t know you were an officer,’ but it is usually in good fun,” he said.

Ferguson also said PVPD had “not experienced any PR problems due to our enforcement,” and went on to say that most people’s complaints dealt with their beliefs that there wasn’t enough traffic enforcement.

“In general, our community likes us enforcing traffic laws and we often work areas where people have reported traffic issues,” Schaan said, and because the police work with the community, “we get support when utilizing unmarked vehicles.”

Whether you think unmarked cars are fair or not, Manera said there’s an easy solution to the problem.

“I always tell drivers to obey all traffic laws because you never know if there is an officer around to see,” Manera said.