Column: Shed a tear for one less ninja in the world 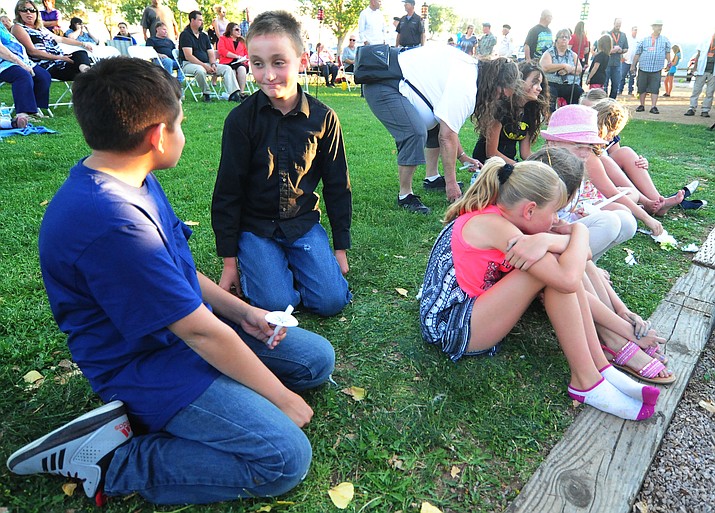 Best friends Dylan Gamboa-Wright (left) and Daniel Beasley were with other friends during a candlelight vigil in honor of ten-year-old Christian Pearson at Memory Park in Chino Valley Saturday, June 17.

Long before adulthood and reality teach us otherwise, one of the greatest aspects of being young is that no limits have been placed on our dreams.

We just haven’t had enough experience yet to know that we probably won’t grow up to be president, or better yet, a pirate. We are young enough to let our vivid imaginations take hold and steer our ambitions.

Christian Pearson wanted to be a ninja.

Friends, family and his former teachers gathered Saturday night with hundreds of others in Chino Valley’s Memory Park to remember a 10-year-old boy who will never get a chance to pursue his dreams.

Pearson died on Sunday, June 11, 2017, after being taken off life support at Phoenix Children’s Hospital. Initial reports indicate he died from injuries associated with multiple cracks to his skull and severe burns to his body. There were bruises, some older, that indicated this was a boy who had been physically abused, according to police reports.

Pearson’s mother, Juliana Moreno, and her boyfriend, Daniel Terry, have been arrested and charged with first-degree murder.

His former teachers describe Pearson as a smart and rough-and-tumble boy who had an infectious smile. He had a cute lisp when he first started kindergarten, one that would endear people to him quickly. And his teachers describe him as a sponge, eager to soak up all the learning they could dish out.

And he was very good at math, his favorite subject.

He was so good at it, in fact, that his fourth-grade teacher had to call him out into the hall and tell him to quit shouting out all the answers to questions and to let the other students have a try once in a while.

Just weeks ago he was recognized at Del Rio Elementary School as a member of the Million Words Club. An avid reader, Christian had read more than 2 million words in the past school year to earn that recognition.

During recess at Del Rio, where he had just completed the fourth grade, you would likely find Christian out on the basketball court, playing his favorite sport, usually with his best friends Daniel Beasley and Dylan Gamboa-Wright.

But they were not his only friends. Many of them sat below Christian’s photo at Saturday’s vigil, sharing tears and hugs and describing a boy that everyone liked, one who had a generous spirit where he was always there to make others feel better.

Sometimes in journalism it is easy to forget there are people behind the headlines that we write. There are so many stories, most of them tragic, and they come at us quickly. We do our jobs, report the news, and then move on because another dozen tragic stories are about to take their place.

But some stories can touch even an old, cynical newspaper editor’s heart and force him to find out about the boy beyond the headline, a boy who wanted to be a ninja.

“I never imagined this would be something I’d have to tell you,” Christian’s first-grade teacher Blair Bachman wrote in a letter to him read at the vigil. “But now it is your chance to ninja away in heaven.”