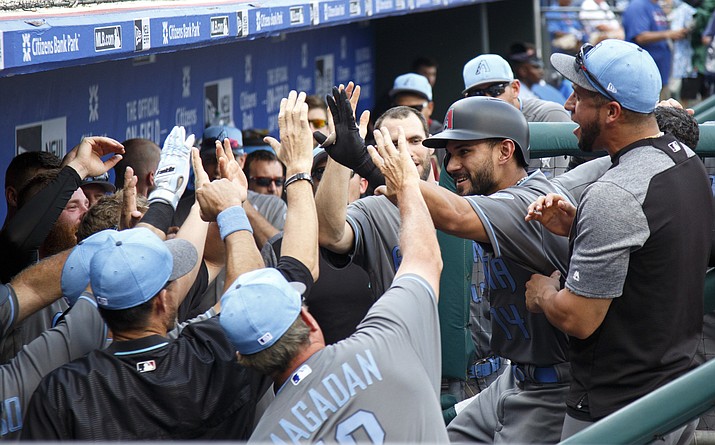 Arizona Diamondbacks’ Reymond Fuentes celebrates his home run with teammates during the 10th inning of a baseball game against the Philadelphia Phillies on Sunday, June 18, 2017, in Philadelphia. (Chris Szagola/AP)

Fuentes homered in the 10th inning to lift the Arizona Diamondbacks to a 5-4 victory over the Philadelphia Phillies on Sunday.

“It’s very special,” Fuentes said. “Even more today since it’s Father’s Day, so shout out to my father. Happy Father’s Day today and that’s my gift to him.”

Fuentes entered the game in the eighth inning as a pinch runner and was caught stealing. However, the rookie redeemed himself by going deep off Jeanmar Gomez (3-2) with one out in the 10th.

“I was about to jump in (to the bushes) after that third out to look for it,” Fuentes said of the home run ball, which was retrieved by the grounds crew. “I’m going to send it home to my dad.”

The Diamondbacks completed a three-game sweep of the Phillies with their seventh straight win overall. Arizona improved to 44-26, the best 70-game start in team history.

“They were resilient,” Arizona manager Torey Lovullo said. “We had a couple tough moments today and these guys didn’t let that affect them. I said from the beginning, overcoming tough moments, cycling it through and then coming out the other end is something that winning teams do and we do that very well.”

The Phillies have lost 11 of 12 and have baseball’s worst record at 22-46. Hector Neris entered with a 4-3 lead in the ninth and failed to pick up a save for the second time in eight chances. He walked the first batter he faced, allowed two singles to tie the game and then worked out of a jam to keep the score even.

Archie Bradley (3-1) pitched a scoreless bottom of the ninth, stranding a pair of baserunners. Fernando Rodney earned his 20th save in 23 chances.

Arizona left-hander Robbie Ray allowed four runs over 5 1/3 innings after giving up just one run over his last 37 innings while winning his last five decisions.

“I guess it was a week since my last start, and I had to space out my bullpens a little bit,” Ray said. “But that’s not really an excuse. This is the major leagues and you have to be ready for it.”

The Diamondbacks raced out to an early 3-0 lead against Ben Lively with first-inning home runs by Paul Goldschmidt and Chris Owings. Lively scattered four hits over his last five innings.

“He did a real good job,” Phillies manager Pete Mackanin said. “It’s good to see the way he battles. All four of his starts have been good. He’s a tough guy.” Aaron Altherr and Maikel Franco each hit solo home runs for Philadelphia. Ty Kelly put the Phillies ahead 4-3 in the sixth inning with a pinch-hit RBI double.

A STREAK AND A MILESTONE

Diamondbacks LHP Patrick Corbin’s next start will be pushed back to Friday. Corbin will make his second consecutive start against the Phillies and will avoid a matchup with the Rockies in Colorado.

Diamondbacks: OF A.J. Pollock (strained right groin) made first his rehab appearance on Saturday night with Triple-A Reno. He played five innings in center field as scheduled and went 1 for 2 with a walk.