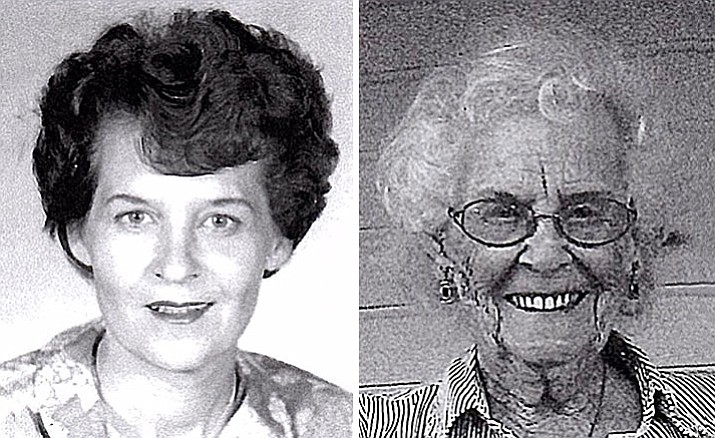 Dolly Crystal Brown, passed away at home in the early morning hours of Friday, June 9, 2017. She was born on the family farm in the Boston Mountains of Crawford County, Arkansas, on Aug. 31, 1923. She was the 11th child of Frank Edward and Mary Emma (Boyd) Wieburg.

She is survived by her daughter and son-in-law, Debra and Danny Pedersen; grandson and his fiancee, John Pedersen and Amelia Swann; granddaughter and grandson-in-law, Jeanne and Steve Pacheco; and 22 nieces and nephews and their families.

She was preceded in death by her husband of 60 years, Dwain Earl Brown; her son, Donald Craig Brown; her parents; four sisters and six brothers. Dolly lived in Arkansas until the age of 14, when she and her family moved to Laramie, Wyoming. She attended Laramie public schools and worked throughout her high school years, most notably at the Malt Depot. She met Dwain when she was 16 and they dated until they married on Nov. 8, 1943, in South Mills, North Carolina. Dolly moved to whichever port town Dwain was stationed at, when he wasn’t at sea.

She was a member of the American Rosie the Riveter Association due to her work on the U.S.S. Shangri-La while living in Portsmouth, Virginia. After the war, she and Dwain returned to Laramie to start their family. Dolly’s first child, Don, arrived on Feb. 26, 1946. A few short years later, Debra joined them on Aug. 22, 1956. Dolly had many interests and occupations, including her favorite, the managing of the first fast food burger joint in Laramie, Big Buy.

Dolly and her family moved to Wickenburg, Arizona, in July of 1968, where she pursued new interests. She worked at Rancho Grande Motel for four years, but found her true calling in becoming the original garage sale-flip lady. She and Dwain followed their daughter’s family to Prescott in August of 1994. She resided in Prescott Valley until August of 2016, when she moved to her daughter’s house in Prescott.

Dolly was a remarkable listener and she touched many lives. She will be greatly missed by all who knew her. A memorial is planned for June 26, 2017, at 11 a.m., at the Hampton Funeral Home in Prescott. Cremation has taken place and later this year her ashes, along with her husband’s, will be spread at Woods Landing, Wyoming, one of their favorite places.

In lieu of flowers and in her memory, please go and make a “donation” at your favorite casino. She will be smiling down on you.