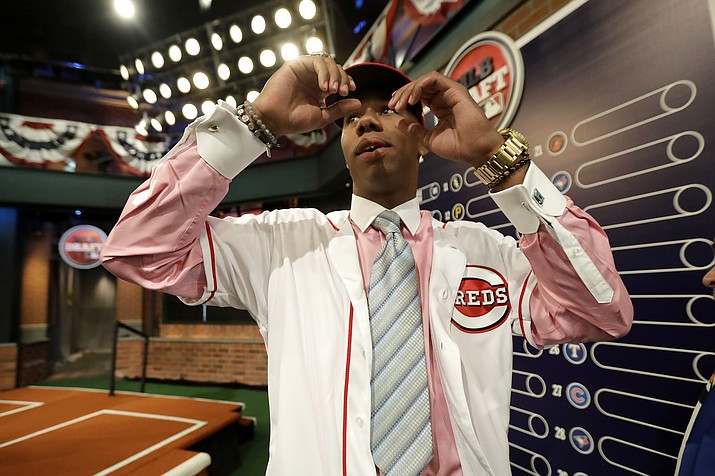 Hunter Greene, a pitcher and shortstop from Notre Dame High School in Sherman Oaks, Calif., walks off the stage after being selected No. 2 by the Cincinnati Reds in the first round of the Major League Baseball draft, Monday, June 12, 2017, in Secaucus, N.J. (Julio Cortez/AP)

SECAUCUS, N.J. — The Minnesota Twins think they’ve got their shortstop of the future in the speedy and slick-fielding Royce Lewis.

The California high school star was taken with the No. 1 pick in the Major League Baseball draft Monday night. It was the third time the Twins were up first — the last time was 2001, when they grabbed hometown high school catcher Joe Mauer with the top choice.

“My body just went numb,” Lewis said during an interview with MLB Network. “It was an unbelievable feeling.”

Lewis played both shortstop and outfield in high school. But the Twins, who lead the AL Central after going 59-103 last year, classified him as a shortstop when Commissioner Rob Manfred made the announcement at MLB Network studios.

The 6-foot-1, 185-pound Lewis hit .377 with four homers and 25 stolen bases for JSerra Catholic High School, establishing himself as a top prospect with excellent speed and a solid bat.

“He’s got that ‘it’ factor that a No. 1 pick needs to survive and move forward and have success at the end of the journey,” said Mike Radcliff, the Twins’ vice president for player personnel. “He checked all the boxes for us.”

The 18-year-old Lewis was a standout on USA Baseball’s gold medal-winning Under-18 team at the Pan American Championships last year and was selected as this year’s National High School Coaches Association’s high school senior baseball athlete of the year.

“We know he’s going to be a leader the second he steps on the field,” Twins chief baseball officer Derek Falvey said. “We’ll let the baseball play take care of itself.”

With the second pick, Cincinnati took California high school right-hander Hunter Greene, one of the top two-way talents in a draft stocked with them.

Greene, chosen as a pitcher, also played shortstop at Notre Dame High School, but a fastball that can reach 100 mph has the Reds projecting him as a future ace. Greene, featured on the cover of Sports Illustrated this season, was the first of four prospects in attendance at the draft site to be selected.

He was asked to give a scouting report on himself as a pitcher.

“Man, I’m a monster,” he said, chuckling. “I’m different on the field than I am off the field. I’m just going to go out there and compete and challenge and pound the zone and go after guys like I know I can and like everybody else knows I can.”

And while the Reds drafted him as a pitcher, Greene sounded as though he still might have designs on playing the infield, too.

“I don’t even know yet,” he said, wearing a Cincinnati cap and jersey. “I still love doing both and I think the ballclub is excited for getting two players for one. So I think they’re pretty pumped up for that, so we’ll see how it works out.”

Falvey said the Twins’ choice came down to the waning minutes and the decision to pass on Greene was “really tough.”

“We felt Royce separated himself from those other guys just a bit, and we feel like he’s somebody that we’ll build around for the future,” Falvey said.

At No. 3, San Diego selected North Carolina prep left-hander MacKenzie Gore, marking the first time since 1990 that the top three picks were all high school players.

McKay had teams considering whether they should draft him as a pitcher, hitter — or both. The Atlantic Coast Conference player of the year is hitting .343 with 17 homers and 56 RBIs for the College World Series-bound Cardinals. He’s also 10-3 with 2.34 ERA and 140 strikeouts and 33 walks in 104 innings on the mound.

“It’s just awesome, getting to swing it every day, play every day,” McKay said in an interview with MLB Network. “It’s going to be fun to be involved, and being on the field a lot.”

Atlanta selected Vanderbilt right-hander Kyle Wright — who grew up a Braves fan — with the No. 5 pick, looking to augment a large stable of touted arms already in the team’s farm system.

After North Carolina high school outfielder Austin Beck went sixth to Oakland, a pair of University of Virginia teammates were picked with the next two selections: first baseman Pavin Smith to Arizona and outfielder Adam Haseley to Philadelphia.

The University of North Carolina also had a pair of first-rounders: right-hander J.B. Bukauskas went 15th to Houston and shortstop Logan Warmoth 22nd to Toronto.

“I can’t wait to get out to LA,” Adell said. “They’re getting the full package, I believe.”

At No. 13, Miami took New Mexico high school lefty Trevor Rogers, who was also at the draft site and is the cousin of former Marlins outfielder Cody Ross.

“Cody would have taken him 1/1 I think,” Marlins vice president of scouting Stan Meek said. “He loves him. He says he’s a great kid, a hard worker and the kind of person we want in our system.”

Washington took left-hander Seth Romero at No. 25, even though he was dismissed from the University of Houston’s baseball program last month for repeated violations of school and athletic department policies. His mid-90s fastball, biting slider and easy delivery still kept many teams interested.

Alabama high school outfielder Bubba Thompson was the last of the players at the draft to be taken, going to Texas with the 26th pick.

The Chicago Cubs capped the first round by selecting right-hander Alex Lange, who has helped pitched LSU to the College World Series.