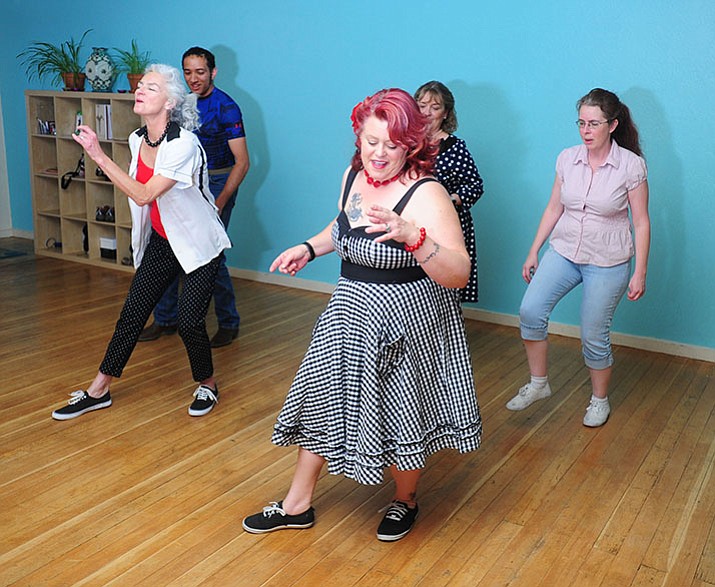 Tonight opens the 2017 Prescott Film Festival at the Yavapai College Performing Arts Center with a 6:30 p.m. showing of the film, “Alive and Kicking,” a documentary about the culture of swing dancing from the Lindy Hop to modern-day social dancing.

Eric Duque, co-owner of Flying Nest Dance Studio with his wife, Delisa Myles, has been dancing the Lindy Hop for more than 25 years. He and some fellow dancers will be demonstrating several swing dance styles after the movie to the live music of the Yavapai College 16-piece jazz band.

Together with members of the NAU Lindy Hoppers from Flagstaff, they will be on stage displaying dance moves and showing their talent during a jam circle.

“A jam circle is all improvisational, where pairs of couples will highlight their dancing. There will be a lot of energy,” Duque said.

Later on, he will demonstrate a shim sham, a line dance, and orchestrate a “snowball.”

“I yell out ‘Snowball!’ and all the dancers break out and grab a partner from the audience. My goal is to have every person dancing in the aisle,” he said.

The Lindy Hop, the original swing dance, started in the 1930s in Harlem, Duque said, having evolved out of the Charleston during the earlier ragtime era. That, in turn became what is known as the East Coast swing, which expanded to the west coast where dance floors were tighter, and a different type of dance, Cali-style swing, developed.

“That kind of died out for a while. The disco in the 1970s became the Hustle and West Coast swing. There’s a big family of dances that’s considered swing,” he said.

The movie follows the growth and resurgence of swing dance and relates personal stories of the dancers.

Duque said partner dancing forms a community of people who get together and have fun. It’s a place where cellphones, Facebook and technology are put on hold.

“You have to connect and hold another human being in your arms for three minutes in a nice social context. What’s more, the dance is connected with the music,” he said. “There is an interplay that takes place between the dancers and the musicians.”

For those who attend the film and the dance afterward, and who want to learn more, Duque said the studio will offer lessons for the “absolute beginners” starting June 13 at 6:15 p.m. for six weeks. At 7 p.m., students can put their new skills to practice at the courthouse plaza and dance to live jazz music every Tuesday evening. For more information, visit flyingneststudio.com or call 928-432-3068.

Tickets for the movie are $12 and include the dance party afterward. Visit prescottfilmfestival.com for more information, or call 928-458-7209.