Review: ‘Noises Off!’ – a farce within a farce 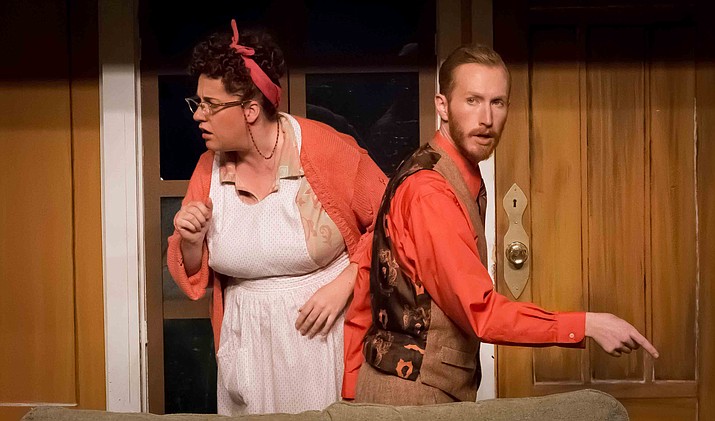 Playwright Michael Frayn combined two thoroughly innovative concepts with his award-winning farce “Noises Off!” The problem is that, apart from a handful of laugh-out-loud moments, the two-hour-plus comedy is not exceptionally funny.

Still, the show is well performed and so unusual that it may be worth attending for its uniqueness alone.

Frayn’s first novelty was to depict a farce within a farce, start to finish, each player portraying a different character with a different name in the “inner” and “outer” farces. Yes, it’s a little confusing at first, as almost certainly intended by Frayn. And we sort everyone out sometime during the second act, rendering the issue moot fairly early on.

The other, and even more ingenious, innovation was to use three acts to divide the “inner” play into a first act dress rehearsal for which the “inner” farce’s cast is, by their own admission, woefully unprepared; an Act II bird’s-eye view of increasingly contentious and chaotic backstage interpersonal conflicts and shenanigans; and the third act depiction of the opening night that, given the unfortunate circumstances, can’t possibly come off without a hitch, not even close.

Additionally, in “Noises Off!” the fantastic two-sided and two-story set, designed for this production by Stan Reed and Randy Faulkner, almost becomes another character in the play.

Director Don Langford and his excellent and hard-working(!) cast are to be commended for a cracker jack job performing a show that is inherently difficult to pull off. Farces aren’t easy to begin with, and when you have one farce within another, the timing alone is near impossible to get right. Well done!

To top it off, there are American and British accents to contend with. Marissa Ellis portrays American actress Dotty, switching back and forth on a dime to British housekeeper Mrs. Clackett. You’d never know Ellis wasn’t a Brit. Her handling of errant sardines in the third act is one of the funnier bits.

Greg Fine plays narcissistic “inner” farce director Lloyd, who calmly delivers the most biting sarcasm amid what has to be suicide-inducing frustration.

Of course, there are the requisite love affairs among the actors, slamming doors, performance-sabotaging practical jokes, more than one search for a fallen contact lens, disappearing clothing, too many burglars, and unwanted communications from the tax collector.

Not to mention those silly sardines, which figure prominently throughout.