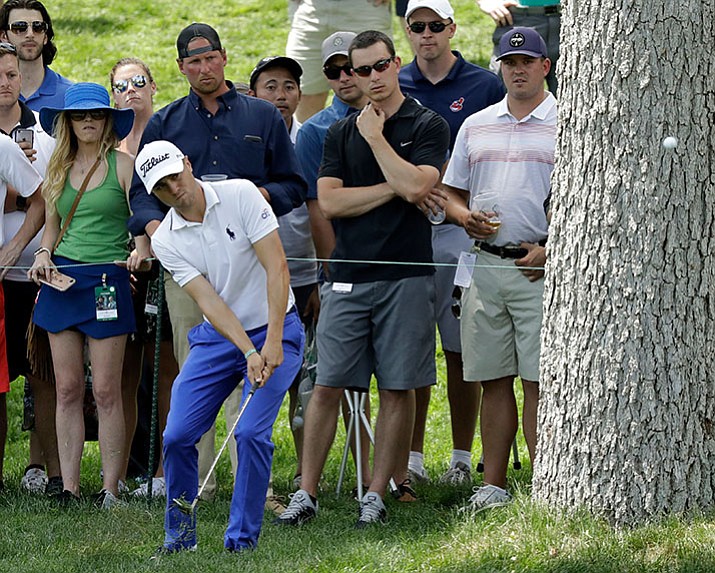 Justin Thomas hits on the second hole during the third round of the Memorial, Saturday, June 3, , in Dublin, Ohio. (Darron Cummings/AP)

DUBLIN, Ohio — Daniel Summerhays managed to walk a relatively straight and narrow path at the Memorial, and it took him to an unlikely position going into the final round.

He started with a five-shot deficit.

He ended with a three-shot lead.

All because the guy next to him Saturday, Jason Dufner, lost his way.

Summerhays dropped only one shot and rarely was out of position on his way to a 4-under 68. More than his solid round was the collapse by Dufner. One day after he set the 36-hole scoring record, Dufner shot a 77 and was four shots behind.

He made four straight bogeys on the front nine and lost his five-shot lead in five holes. He hit two balls in the water on the back nine. He missed the putts he had been making for two days.

“Today was pretty pathetic on all accounts, so have to play better tomorrow,” he said.

At least he was still in the game, along with plenty of company.

Summerhays was at 13-under 203. Matt Kuchar, who won the Memorial four years ago, ran off three straight birdies on the back nine and shot a 67. That put him in the final group with Summerhays as Kuchar tries to end three years and 82 starts without a victory on the PGA Tour.

“I’m excited to have another chance here,” Kuchar said. “It looked like after 36 holes that none of us were going to have a chance at it.”

Bubba Watson overcame a heckler on the 18th hole with one last birdie for a 68. He was four shots behind along with Justin Thomas (69) and Dufner. Rickie Fowler (72) salvaged an up-and-down day and was five behind.

Watson turned and acknowledged the heckled after his birdie putt.

“Obviously, not a Bubba Watson fan,” he said. “It started about 50 yards short of the green. He kept going. I’m taking a guess, he wasn’t drinking water like I was all day. But it’s one of those things.”

This is a rare chance for Watson, the two-time Masters champion who hasn’t been a factor all year. He has gone 14 months without finishing in the top 10 at a PGA Tour event with a full field.

But even for Watson, it all started with Dufner’s bad day.

Dufner missed the second green to the left from the rough and made bogey. He missed a 6-foot par putt on the third, then hit into the right bunker on the par-3 4th and made another bogey. And then he three-putted the par-5 fifth for a fourth straight bogey.

Dufner was still tied for the lead when his wedge on the par-5 11th spun back down the green and into the water, leading to double bogey. It was a three-shot swing when Summerhays made birdie, and Dufner never caught up.

He had said his breathing exercises over putting didn’t mean he would always have good days, and this was a bad one. Dufner had a pair of three-putts, and he twice missed birdie putts from 6 feet. He capped off his day by pulling his tee shot into the water and making another bogey.

“The tournament is not over,” Dufner said. “It will be over tomorrow.”

Summerhays wasn’t thinking about cutting into the lead when he started. He wasn’t thinking much about anything except the shot at hand, and he kept hitting good ones in the midst of Dufner’s streak of bogeys.

“A train wreck can happen at any moment,” Summerhays said. “And that’s why it’s such a great golf course because it does test everything. Legitimately from the first hole to the 18th hole, there’s a double bogey somewhere in there.”

Jordan Spieth knows the feeling. He was right in the mix until catching a downhill like in the bunker left of the par-3 eighth. He tried to play a perfect shot and barely got it out, then chipped down to 5 feet and missed the putt, making double bogey. Spieth started the back nine with two straight birdies only to follow with two straight bogeys. It added to a 71, and he was six shots behind.