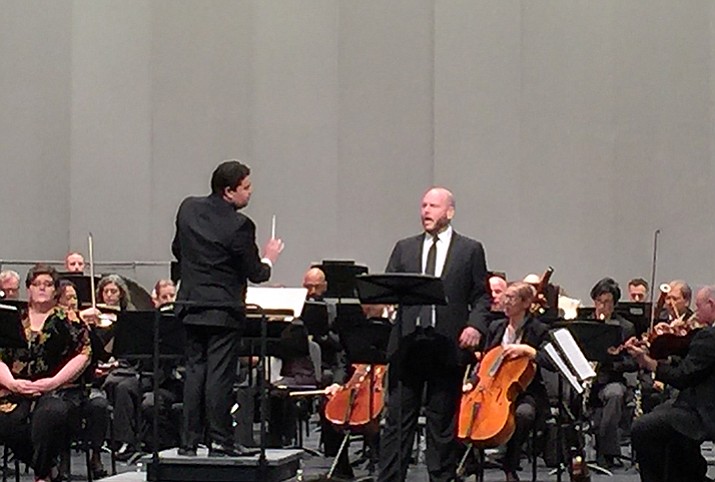 I looked forward with eager anticipation to Sunday afternoon’s concert of the Phoenix Symphony Orchestra at Yavapai College Performing Arts Center, and for reasons some might think a little silly. Part of the concert lineup was the Symphony No. 45 in F-sharp minor, more commonly known as the “Farewell Symphony,” by Franz Joseph Haydn. I performed it decades ago in my junior high school orchestra which, given the piece’s unusual ending, had me reminiscing about the great time we young musicians had surprising our parents at that concert eons ago.

(SPOILER ALERT: In the Farewell Symphony musicians “say goodbye” by leaving the stage one by one during the fourth and final movement, eventually leaving just two violinists to finish off the piece in a muted duet.)

The unceremonious musical farewell, as it were, was intended by Haydn as a subtle message to his patron prince that the musicians, who longed to return to their families, were none too pleased about having been kept longer than promised. Evidently the prince understood and sent the players on their way the next day.

The Farewell Symphony is delightful enough in its musicality, but relatively unremarkable as one of the great composer’s compositions……except, of course, for the “communicative” ending. So how would a world-class orchestra of serious adult musicians handle that ending? The orchestra played the piece with energy and precision, and came up with their own creative and humorous take on the farewell. Kudos to conductor Tito Munoz for his playful willingness to have some fun. The audience loved it.

The second half of the concert featured the gorgeous Das Lied von der Erde (Song of the Earth) by Gustav Mahler. Again the orchestra excelled. Strong dynamics and outstanding, expressive performances by mezzo-soprano Margaret Mezzacappa and tenor Richard Cox made the hourlong piece seem half its length.

Comprised of six movements, each representing a different poem, the piece is perhaps best enjoyed by following the libretto’s text.

On the other hand, the music is so rich and opulent that following the story might instead seem a distraction.

After an animated, theatrical “Drinking Song of the Earth’s Sorrow,” “The Lonely Man in Autumn” was lush and haunting. “Of Youth” was positively boisterous, setting the stage for a happy, carefree “Of Beauty.” “The Drunkard in Spring,” was unapologetic in its exuberance.

Saving the best for last, the tragic, later hopeful, “The Farewell” (yes, the concert exhibited a recurring theme) boasted the frequent presence of exceptional solo oboe.

It was yet another fine afternoon at the symphony.

Prescott’s classical music lovers are fortunate indeed to have regularly scheduled concerts of the Phoenix Symphony performed locally. Next season will include seven such concerts under the baton of Maestro Munoz, with the first scheduled for 3 p.m. on Sunday, Sept. 17. This concert will feature the magnificent Tchaikovsky Violin Concerto, Stravinsky’s enchanting Rite of Spring, and the Prelude, Fugue and Riffs by Leonard Bernstein.