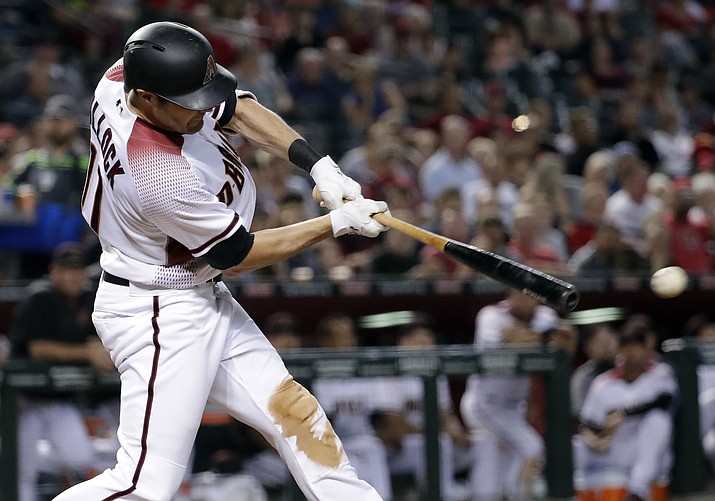 Arizona Diamondbacks A.J. Pollock follows through on an two-RBI double against the Atlanta Braves during the second inning Monday, July 24, 2017, in Phoenix. (Matt York/AP)

PHOENIX — J.D. Martinez hit a three-run home run to help Zack Greinke and the Arizona Diamondbacks cruise to a 10-2 win over the Atlanta Braves on Monday.

Martinez, hitless in his first five at-bats as a Diamondback after coming over in a trade with the Detroit Tigers last week, hammered a 1-2 pitch from reliever Matt Wisler high off the center field batters eye with nobody out in the bottom of the sixth. It was his 17th home run of the season.

Greinke (12-4) pitched eight innings and allowed two runs on five hits with six strikeouts. He’s 10-0 in 12 starts at Chase Field this season. Greinke added a run-scoring double in the second inning and a pair of sacrifices.

A.J. Pollock hit a two-run homer, doubled twice and drove in four runs, and Jeff Mathis reached base four times with three singles and a walk, scoring twice for the Diamondbacks.

R.A. Dickey (6-7) took the loss with his knuckleball often more wild than baffling. Dickey threw four wild pitches that helped the Diamondbacks get into scoring position over his 3 2-3 innings of work, and walked five while striking out four.

Atlanta’s Freddie Freeman came close to his 19th home run of the season in the top of the third, but it was ruled a double on the field when the ball hit the yellow line extending vertically in left-center field. The Braves asked for a review hoping for an overturn to a home run, but after 54 seconds the call was upheld.

Sean Rodriguez, pinch hitting the top of the fifth, lined a two-run homer to left field with Johan Camargo on second base, cutting the Diamondbacks’ lead to 4-2. It was Rodriguez’s first home run of the season and first pinch-hit homer of his career.

But Arizona plated four runs in the sixth, one on Paul Goldschmidt’s RBI double and three by way of Martinez. Pollock’s home run came in the seventh with the Diamondbacks already ahead by six.

The Braves totaled six wild pitches for the game.

“He’s a pro, and he’ll be an asset to the Minnesota Twins,” Braves manager Brian Snitker said. “We’ll be following him and wishing him nothing but the best.”

Garcia was slated to start Wednesday against Arizona. Snitker said either a minor-league callup or a relief pitcher will step in for that start.

Braves: RHP Mike Foltynewicz (8-5) faces Arizona for the second time in his career on Tuesday.

Diamondbacks: RHP Taijuan Walker (6-4) rejoins the rotation after missing his scheduled start July 20 while on the paternity list. Walker hasn’t gotten a win since June 21 at Colorado, but has allowed three or fewer runs in 10 of his last 11 starts.