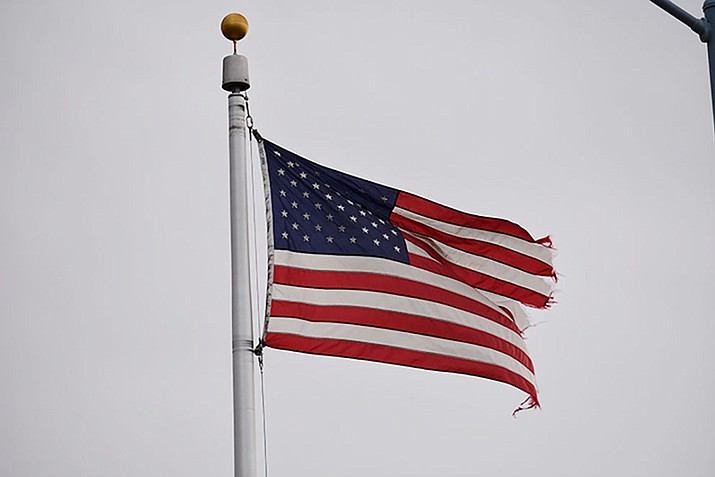 If you’re going to showcase the United States flag, then you have a responsibility to display it properly and to treat it with respect.

It’s not just the proper thing to do, it’s also the law. Public law 94-344 is known as the federal flag code and contains rules for handling and displaying the flag of the United States of America.

Part of that, and the one we see violated most often, is that when a flag is worn out or otherwise no longer a fitting emblem for display, it should be retired in a dignified way, preferably by burning.

There’s a government office in Prescott Valley that is flying a ragged flag, one that is frayed at the end and torn in places.

That is no way to represent the USA. We know people get busy and sometimes the flagpole just becomes part of the furniture and doesn’t always get noticed.

But the flag never should. It demands being noticed, and if you or your office is flying a flag, it is the duty of all to make sure it is done so with respect. So if the flag at your place of business or government office has seen better days, then suggest it is time for it to be replaced.

Other violations we see often:

The flag should only be flown during daylight. It can be flown at night, but it must be illuminated.

The flag should not be subjected to weather damage, so during severe weather events it should be taken down (unless it is an all-weather flag).

Many of the flags placed on cars get frayed quickly from the high-speed winds. They also need to be retired with dignity and replaced.

If you have a flag and are not sure how to dispose of it properly, most American Legion posts hold flag disposal ceremonies on a regular basis. If you’ve never attended one, you should. The respect they show demonstrates what true love of country and patriotism is.

We all need to honor and respect the flag and what it stands for, the sacrifices so many have made on its behalf. Not just on important holidays, but every day. And if you take on the responsibility of flying the U.S. flag, then make sure you display it properly.