British Open: An All-American start on day one 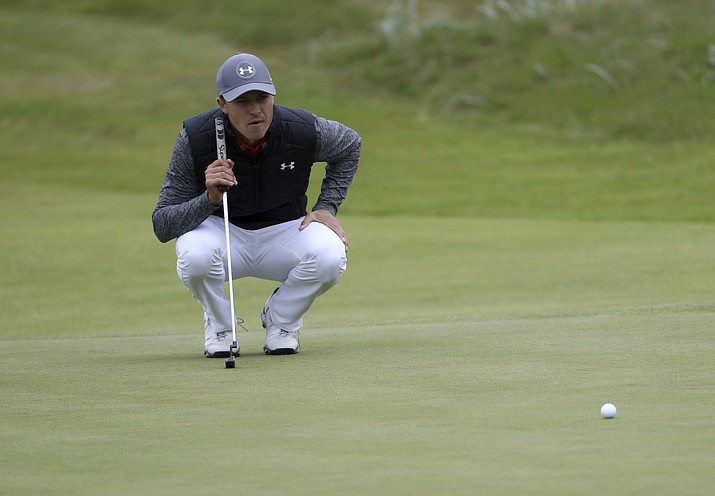 Jordan Spieth of the United States lines up a putt on the 14th hole during the first round of the British Open Golf Championship, at Royal Birkdale, Southport, England, on Thursday, July 20, 2017. (Peter Morrison/AP)

SOUTHPORT, England — The wind off the Irish Sea pushed away the rain clouds and bathed Royal Birkdale in sunshine, Stars and Stripes.

The British Open began Thursday with an All-American flavor.

Jordan Spieth, chomping away on gum as he watched one putt after another pour into the center of the cup, worked some bunker magic late in the round to keep his card filled only with birdies and pars for a 5-under 65. He was tied for the lead with U.S. Open champion Brooks Koepka and Matt Kuchar.

Koepka, with no competition and barely any practice since capturing his first major a month ago, ran off three straight birdies and holed a tough shot from a pot bunker for eagle on the par-5 17th hole.

Kuchar, who first endeared himself to these British fans as a 19-year-old amateur in 1998 at Royal Birkdale, tied the course record with a 29 on the front nine, only to fall into a routine of pars the rest of the way. He still shot 65, his best score ever in a major.

They were a stroke ahead of Paul Casey and Charl Schwartzel on a day that started nasty and ended with 39 players breaking par. The biggest question after a long day on the links was what was in store for Friday, when high wind and occasional showers were in the forecast.

“I thought today’s round was extremely important, as they all are,” Spieth said, atop the leaderboard at a major for the first time since last year’s Masters. “But given the forecast coming in, I thought you really needed to be in the red today. You can certainly make up ground in a round tomorrow, and we’ll see it happen. But being able to kind of play with shots, or play a little more conservative because you don’t try to do too much on a day like tomorrow, that’s nice and very helpful.”

Dustin Johnson and Rory McIlroy fall into that category.

Johnson, the No. 1 player who hasn’t played the weekend at a major since the British Open last year, managed only one birdie on a decent day for scoring and shot 71. McIlroy also shot 71 and was relieved. Coming off three missed cuts in his last four events, he was 5 over through six holes when his caddie gave him a pep talk. McIlroy closed with three birdies over the last four holes to stay in the game.

Phil Mickelson failed to make a birdie, the first time that has happened in a major in five years, and shot 73.

Kuchar was the only one at 65 who played in the afternoon. The wind remained strong, though the course was manageable for everyone who stayed out of bunkers and deep grass and who holed putts.

“I watched some of the golf this morning on TV. It looked awfully challenging,” Kuchar said. “It looked like anything under par was going to be a good score. Seemed like the later your tee time, the better draw you got. ... For me, to start my British Open with a 29 on the front nine is a great way to start.”

Charley Hoffman had the best start of all, holing out from the rough on the daunting opening hole for an eagle. He was poised to join the leaders when he reached 5 under with a birdie on the 15th, only to drop shots on the next two holes. Hoffman shot 67 and was in a group that included Justin Thomas, Ian Poulter and Rafa Cabrera Bello.

“He was rolling it superbly that week, and I don’t think it was that far behind today,” Stenson said.

But his best shot was with his feet in the sand. Spieth was in thick rough to the right of the 16th fairway when his shot crept into the back of a pot bunker. Not only was the ball on a slight slope, the rake marks left his ball between two ridges.

“This is dangerous,” he said to his caddie.

He aimed to the right of the hole to avoid it going off the green on the other side and into another bunker, and it came off perfectly about 10 feet away.

“That was awesome,” were his next words to his caddie.

He made the par putt — Spieth made a lot of putts and picked up a two-putt birdie on the 17th and narrowly missed a 7-foot birdie putt on the last. It was his best start in a major since he shot 66 at the Masters a year ago. Spieth rated it among the top five or six rounds he has ever played in a major, not bad for someone who came close to the Grand Slam two years ago.

“I couldn’t have done much better today,” he said.

Royal Birkdale was much more kind than it was nine years ago in raging wind and rain. The 146th Open began in cool temperatures, a light rain and a strong wind. Mark O’Meara, a winner at Royal Birkdale in 1998 who is playing in his last British Open, hit the opening tee shot.

And then he hit another one.

Just not for McIlroy until late in the round, or Johnson and Mickelson all day.

“With the weather we’re expecting tomorrow, I still feel I’m in the golf tournament,” McIlroy said.