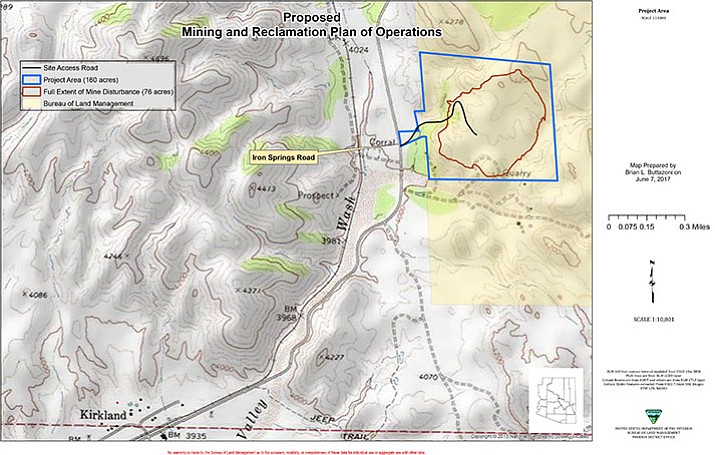 The proposed mine, a small-to-midsized quarry-type operation, will encompass 76 of the 164 acres of public lands. According to Kirkland Mining Company officials, no blasting or use of chemical processing will take place on the property.

The early stages of scoping means the public can offer comments about upcoming projects, and already residents of Skull Valley have loudly expressed four concerns over the proposed mining of pozzolan: dust, noise, water and traffic.

Until studies are completed and data analyzed, the Kirkland Mining Company and the federal Bureau of Land Management can’t provide the answers the residents want to hear.

KMC, a family company headquartered for the time being in Scottsdale, submitted plans to develop mining operations on about 76 acres of public land near Skull Valley. The product, high quality pozzolan, is used in mortar, cement and concrete, and can absorb toxins and filter water. It is supplementing or replacing a dwindling supply of fly ash used in concrete markets.

KMC’s plan calls for mining, crushing and transporting pozzolan either by truck or railway to customers within about a 350-mile radius. The Environmental Planning Group conducted a biological evaluation this year and found no critical habitat in the area, with some potential for the Arizona toad to live in canyons and washes near the site.

To counteract dust kicked up from trucks and equipment, KMC states the mining operation uses a dry process with no chemicals and no consumption of water except that used for dust control. The property has an existing well on site and can provide the 20 gallons per minute for daily operations.

Areta Zouvas, KMC president, said no tests have identified carcinogenic particles such as asbestos or erionite, as some residents feared. In August 2015, Zouvas filed a conditional use permit with Yavapai County to sample up to 1,000 tons of materials without selling any product. She sent samples to a variety of industries to test the market.

Allison Dixon, Skull Valley resident and founder of the website KirklandMineForum.org, is concerned that trucks leaving the site may not be adequately covered, and dust will blow out along the trucking route.

Zouvas said the company is aware that the Arizona Department of Transportation has trucking regulations that cover such situations, and she is looking to experts to give her guidance. The mining company will be providing materials to privately owned companies with their own trucks, and all trucks must abide by state regulations.

At the July 11 public meeting, residents said they were afraid the water table would decrease with the additional use by KMC, and they wondered how their own wells might be affected.

Zouvas said part of the scoping/planning process includes hiring a hydrologist to test and collect data.

“It’s pretty clear that water will be used for dust abatement, and we think that will be quite minimal,” she said.

Brian Buttazoni, BLM planning and environmental specialist, said the Bureau has a hydrologist who, if necessary, will review the studies.

When Kitty Barnes bought her property about three-quarters of a mile from the mine, she was told the mine would never be re-opened. Potential dust from the stockpiles bothers her as well as noise levels. She feels the company is going to “screw up a bunch of people here.”

Both Zouvas and BLM officials recognize that some in the community are reacting to misinformation or lack of information. The scoping process collects comments and concerns from the public. Those and results of the upcoming traffic, air quality, hydrology will provide more answers.

“Up to 33 resource categories we look to see if they are present and may be affected by this project. Over the next six to 10 months we will find out more. What people are seeing right now is the raw application. The details and consequences behind it are yet to come,” Buttazoni said.

By far, the main complaints centered around transporting truckloads to locations north and south of the mine. KMC estimates full production of about 1,000 to 2,000 tons per day by year five of operation, which could run 40 to 80 hours per week during daylight hours.

At peak operations, plans call for 30 to 85 truck trips per day. Specific routes have yet to be determined, Zouvas said. But already, county supervisors are receiving calls from residents along Williamson Valley Road.

“I would hope they would take it all south, to be honest,” Brown said, adding that his primary concern is the intersection of Iron Springs and Williamson Valley roads where a fire station and two schools are located. He also noise from trucks downshifting and jake brakes might be another issue.

“I’m not opposed to the mining in and of itself. I’d just like to find another way to transport it,” he said.

Zouvas said Drake may be but one component of the business, and the company is looking at all transportation routes including railway.

She also stated that the maximum 85 trips mentioned in the application refers to roundtrips. “Total. At full production.”

She is working on a market study which will determine interest and locations, and whether it’s feasible to transport by rail to California, Colorado, New Mexico.

“We’re looking at a lot of different scenarios, and we don’t have the answers now. We’re doing our homework. We’re doing the legwork on all four issues. This undertaking is not for the faint-hearted,” Zouvas said. “There’s a lot of great support for us out there. We just want a fair shake.”

Supervisor Rowle Simmons said the county is looking into transportation issues such as safe ingress and egress from the mine property. He also noted that when I-17 is closed, traffic heading north is often rerouted through Skull Valley and up through Prescott. He said everything with traffic is “up in the air right now, and a little premature.”

“Remember, these people (KMC) pay taxes like everyone else. We can’t deny them access to the highway,” Simmons said.

Some residents complained they had no notice of the July 11 public meeting. Zouvas said part of the problem was outdated information from the county. In addition, she feels the 2-mile radius for notification is not enough. She’d like to see that expanded.

BLM officials expect the studies and analyses to be completed by January or February. A second public meeting will be set then.