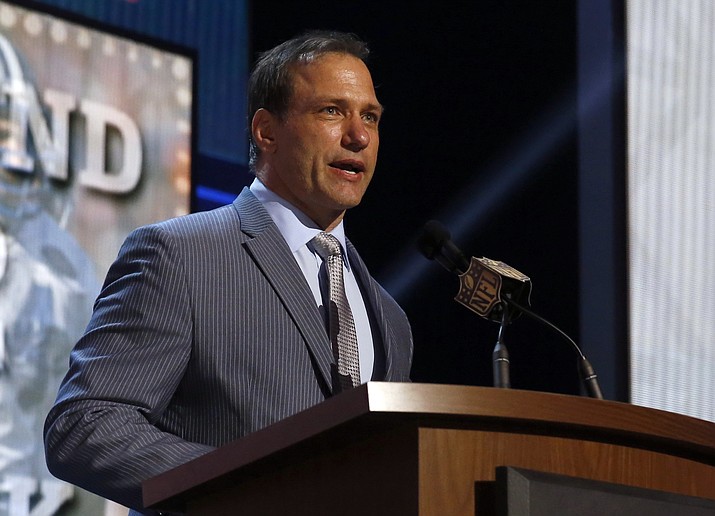 In this May 1, 2015, file photo, Chris Spielman speaks at the 2015 NFL Football Draft, in Chicago. (Charles Rex Arbogast/AP, File)

COLUMBUS, Ohio — One of Ohio State’s most famous football stars sued the university Friday over a marketing program he says used athletes’ images without permission and robbed them of compensation.

The antitrust complaint targets Ohio State marketing programs and contracts that promote the university using likenesses of athletes, including a Honda-sponsored program of 64 banners hung around Ohio Stadium featuring photos of former players.

All are among the athletes Spielman is suing on behalf of, said Brian Duncan, a Columbus attorney who represents Spielman.

The lawsuit names Ohio State and talent management giant IMG as defendants and names Honda and Nike as co-conspirators. Nike is targeted for its “Legends of the Scarlet and Gray” vintage jersey licensing program and other apparel contracts with Ohio State.

The lawsuit accuses the university and the companies of “unjust and monopolistic behaviors” and asks for compensation above $75,000, as is typical in such complaints, while noting Ohio State makes millions in revenue from merchandising programs involving ex-athletes.

“Former OSU student-athletes do not share in these revenues even though they have never given informed consent to the widespread and continued commercial exploitation of their images,” the lawsuit said.

The university is aware of the lawsuit and is reviewing it, athletic director Gene Smith said Friday.

“We immensely value our relationships with all of our former student athletes,” Smith said in a statement.

A message seeking comment was left with New York-based IMG. Brian Strong, a spokesman for Beaverton, Oregon-based Nike Inc., said Friday the company is aware of the lawsuit but doesn’t comment on pending litigation.

Honda said it has a three-decade-old relationship with Ohio State, and “we hope this matter will be resolved quickly.”

The filing comes after eight months of unsuccessful negotiations with the university, Duncan said.

Spielman said he’ll donate any money he receives from the lawsuit directly to the university’s athletic department. He called the ability to negotiate corporate use of his name and image “a basic human right.”

“Ohio State is more than welcome to always use my name and image in any way they want to use it,” Spielman told 610 WTVN Radio on Friday.

“The problem comes in when they slap a corporate sponsor on my name and image without my permission, or without giving me the ability to negotiate — or any of our ex-players to negotiate — with that corporation,” he said.

Spielman also said attaching his name to Honda puts him in a difficult situation given a separate sponsorship deal he has with a local Mazda dealership.

Griffin told The Associated Press he fully supports the rights of former athletes to receive compensation from corporations and universities that benefit from the unauthorized use of players’ names and likenesses.

“There is no greater supporter of collegiate athletics than me, and I will be forever grateful for the opportunities provided to me as a former student athlete,” Griffin said in a statement. “However, the recent landscape of collegiate athletics has changed, and these institutions and corporations have a duty to treat all former athletes fairly.”

Griffin plans to donate his proceeds to a nonprofit affiliated with the Profectus Group, which will serve as a players assistance fund for ex-Ohio State athletes in need.

The lawsuit is the latest development in a trend of athletes fighting for compensation they say they’re owed as a result of their participation in intercollegiate sports.

Earlier this year, the NCAA and 11 major athletic conferences announced they agreed to pay $208.7 million to settle a federal class-action lawsuit filed by former college athletes who claimed the value of their scholarships was illegally capped.

Last year, the U.S. Supreme Court left in place lower-court rulings that said the NCAA’s use of names, images and likenesses of college athletes without compensation violated antitrust law. The lawsuit was originally brought by former UCLA basketball star Ed O’Bannon and later joined by other athletes.

After that ruling, athletic departments should know better than to undertake the kind of licensing arrangements with former athletes that Spielman is targeting in his lawsuit, said John Grady, a University of South Carolina professor of sport law.

“You can’t use someone’s image from however many years ago without compensation, given O’Bannon,” Grady said Friday.