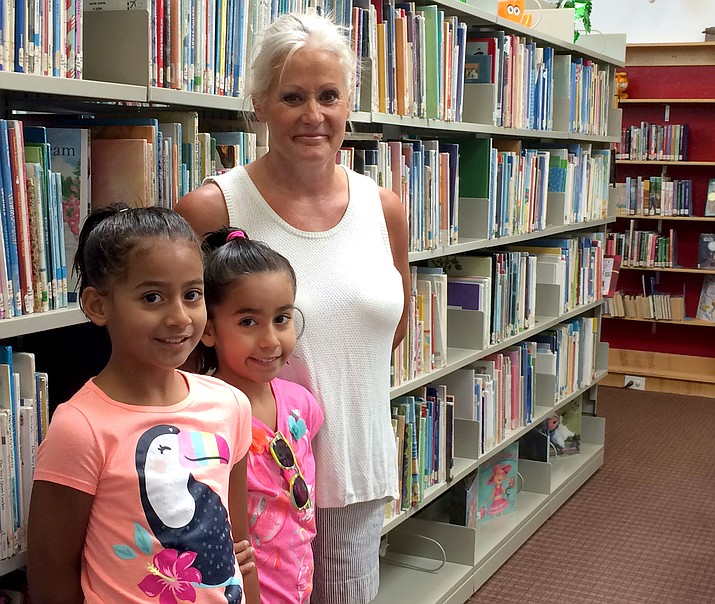 Carolyn Chacon, right, with her two granddaughters fresh from swimming lessons, Arabella, 7, left, and Madison, 8, spent the Fourth of July at home this year with neighbors and friends.

The party’s over, having never really begun this year. So what did Chino Valley residents do when the fireworks show and Fourth of July events were canceled?

Cyrus Pinales, 10, and his family drove to Bagdad and watched a fireworks show that was nearly an hour long, they said. They sat fairly close to where the devices were lit and set off.

“We saw hearts, a Chinese bowl with chopsticks, and a U.S. flag,” Cyrus said. They were visiting friends whose parents live there, and drove back home that night.

Carolyn Chacon and her two granddaughters, Madison, 8, and Arabella, 7, stayed home with a third granddaughter and barbecued.

“We had about 10 people at the house. We decorated the house and hung stars from trees,” the Paulden grandmother said.

Many residents had a quiet holiday after Mayor Darryl Croft made the decision June 29 to cancel the event. Stage II Fire Restrictions prohibited combustible engines that were necessary for the food trucks and numerous inflatables. The hot, dry weather conditions that fueled the Goodwin Fire south of Prescott also contributed to the decision.

The choice was not made lightly, said Community Services director Scott Bruner. With eight or nine generators on hand for concessions and entertainment, town officials’ thoughts were on safety first, he said.

“We received more ‘It was the right thing to do’ comments; there were two complaints,” Bruner said. “We’d been meeting every Monday since February planning this event, and we were disappointed the citizens couldn’t enjoy it.”

The use of the inflatables was a donation to the town, so there was no money lost on them, he said. The fireworks vendor will reimburse the town most of the $10,000 the town paid, said Celia van der Molen, Parks and Recreation.

The company, Fireworks Productions of Arizona, has given the town a rough estimate of what their costs would run – about $2,000. Canceling shows happens occasionally, and the contract outlines what occurs in case of an “act of God,” which is what happened this year, Bruner said.

With the approximately $8,000 in reimbursed money, Town Manager Cecelia Grittman said the town plans to offer its residents something special for Territorial Days or possibly at another event.

This Fourth of July, however, Grittman said she stayed home and had a family cookout. Newest town council member Cloyce Kelly said he and four other council members participated in the Frontier Days Parade in Prescott on the Chino Valley town float. Then he helped cook a pig at the American Legion post.

Van der Molen hadn’t made plans other than to help out at the event.

“I thought I’d be working. I just hung out with family,” she said.

Dorothy Gushwa moved to Chino Valley from Prescott Valley about a year ago. She, too, stayed home.

“I lead a very quiet life,” Gushwa said this past Thursday as she exited the library with an armful of books.