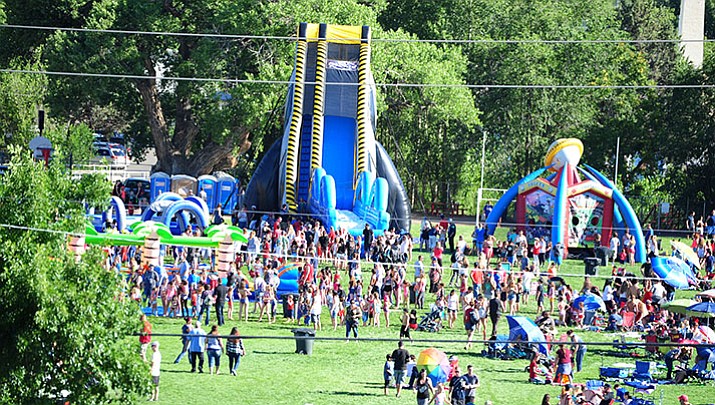 Lots of inflatables, food and live music were available during the 2016 Fourth of July festivities on the Prescott Mile High Football field in downtown Prescott.

As a way to commemorate Prescott’s 19 fallen Granite Mountain Hotshots, Prescott’s July 4 fireworks display will kick off with a new feature this year — 19 separate purple comets, followed by 19 silver salutes in unison.

• Prescott – While the celebration at the Mile High Middle School football field is the obvious spot to watch Prescott’s fireworks ($5 admission), other sure bets include: the courthouse plaza; Whiskey Row; and Acker Park. Recreation Services Director Joe Baynes suggests staking out higher elevation spots near the downtown.

• Prescott Valley – Town recreation officials suggest that along with the park area, residents could get a good view of the town’s fireworks show in the green space around the Prescott Valley Civic Center.

“I want to do something to honor them each year,” Steve Gottlieb of Eagle Management and Events LLC, the organizer of the event, said, adding that the Hotshot tribute would be highlighted by the reading of the Hotshot Prayer by surviving Granite Mountain Hotshot Brendan McDonough.

The fireworks display, which will begin at 9 p.m., will culminate a day of festivities, starting at noon at the Mile High Middle School.

Now in its second year in the downtown-Prescott location, this year’s event promises a number of tweaks to answer concerns from last year’s event. Among them: The fireworks display will be larger, will last longer, and will have a noticeable beginning and end.

Prescott Recreation Services Director Joe Baynes explained that when the city advertised for private firms to handle the event, some changes were written into the specifications. “One of the things we heard from people was that the display wasn’t as long, and there wasn’t a distinct ending,” he said, referring to the 2016 event, which took place for the first time at the Mile High Middle School.

He expects the three-inch shells to produce fireworks that are about twice as high as those launched from the parking garage. This year’s display will last about 22 minutes.

The daylong celebration will include live music, food vendors, a beer garden, and inflatables and water slides.

General admission to the event is $5, and an unlimited inflatables pass for kids costs $10. A flyer for the event states: “No coolers, no canopies, no outside liquids, no outside food, and no animals. Water bottles sealed and not opened are permitted.”

For more than a decade prior to last year, the city conducted its Fourth of July fireworks display at Pioneer Park in northeast Prescott.

The Prescott Valley celebration at Mountain Valley Park, 8600 E. Nace St., will kick off at 3 p.m. with the inflatable Fun Zone and attractions by Freedom Station (wristbands required).

At 6 p.m., live entertainment will get underway, and attendees can partake of a beer and food garden. The free fireworks display begins at dusk.

The town’s website states: “Bring blankets and lawn chairs, but leave the alcoholic beverages, grills, pets, and glass containers behind.”