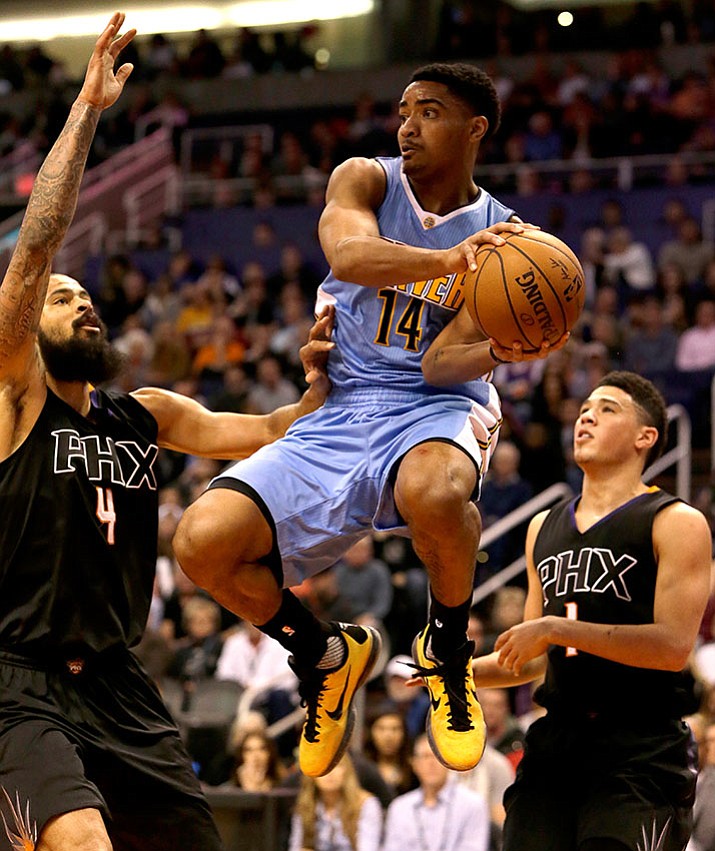 PHOENIX — Danilo Gallinari scored 32 points and Denver took advantage of a third-quarter parade to the free throw line to beat the Phoenix Suns for the second time in three nights, 123-112 on Saturday.

Kenneth Faried had 21 points and 13 rebounds for the Nuggets, winners of three straight and seven of their last nine.

Denver won despite the absence of center Nikola Jokic, who left with a left hip flexor strain late in Thursday night’s 127-120 victory.

The Nuggets were 18 of 19 at the foul line in the third quarter, when Phoenix starting forwards T.J. Warren and Marquese Chriss had five fouls and Booker four. Denver finished 37 of 42 at the line.

Denver outscored the Suns 36-22 in the third quarter and was up 95-76 when Wilson Chandler scored inside with 1:02 to play. The Suns scored the final seven points of the period to cut Denver’s lead to 95-83 entering the fourth.

But Phoenix never got closer than seven in the final 12 minutes.

Early, the Suns were off and running.

But Denver got it going in the second, outscoring the Suns 15-5 to tie it at 44 when Gallinari converted a three-point play with five minutes left in the half. Denver never quite caught the Suns the rest of the half. Bledsoe’s two free throws with 7.6 seconds to play put Phoenix up 61-59 lead at the break.

Nuggets: Jokic is Denver’s second-leading scorer at 15.5 points per game and had posted 17 double-doubles in the last 25 games. ..The Nuggets have beaten the Suns six straight times and swept the season series 4-0. ... Denver’s only first-half lead was 10-8.

Suns: Bledsoe’s previous career high was 40 set in Toronto on Jan. 22.. ... Booker scored at least 20 for the 12th straight game, the first player to do so in his first or second season since Blake Griffin did it 14 in a row in 2010-11. ... Phoenix was without rookie Dragan Bender for the third straight game with right ankle soreness.

Nuggets: Denver is at the Los Angeles Lakers on Tuesday night.

Suns: Phoenix is home against Memphis on Monday night.