Jury: Suspect not guilty in teen’s death
Murder defendant released in case where PV youth was gunned down 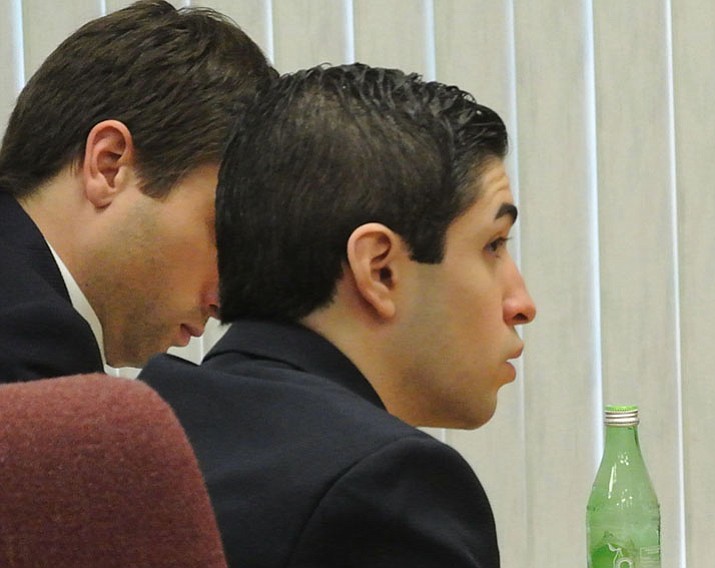 “I’m going home!” Richard Quiroz said Wednesday afternoon, Jan. 25, while sharing tears of joy with members of his family shortly after being found not guilty of murdering a Prescott Valley teenager.

On April 16, 2014, 17-year-old Gabriel Calderon was gunned down in his mother’s driveway by a drive-by shooter using a 12-gauge shotgun.

After an investigation, Quiroz became the prime suspect. He was eventually arrested and charged with first-degree murder, tampering with a witness, aggravated assault, unlawful flight and criminal damage.

Over the course of two and a half years, those charges were whittled down to just one (and the most severe): first-degree murder. If found guilty of such a charge, Quiroz would have faced 25 years to life in prison.

Instead, Quiroz has now been determined not guilty by a jury and released from custody. The verdict was announced just a few hours after the defense and prosecution gave their closing statements.

Representing the State of Arizona, Yavapai County attorney Steve Young closed by going over the key aspects of the case that supported his argument.

Namely, he said Quiroz had no alibi for the time of the murder; he owned a 12-gauge shotgun around that time (the type used to kill Calderon); that shotgun mysteriously disappeared the night of the murder, according to testimony from his girlfriend; Quiroz fled the state with his brother the morning after the murder without explaining to his girlfriend why he was leaving; and he repeatedly told his girlfriend in recorded telephonic conversations to lie to the police about when he left the state and why he decided to leave.

“Common sense tells you, you don’t have to have someone lie on your behalf unless you’re the murderer or you’re involved in that murder as an accomplice,” Young told the jury.

The defense, headed by private defense attorney Ryan Stevens of Griffen & Stevens Law Firm, rebutted Young’s accusations by reinforcing what he had been pushing throughout the 11-day trial: the state’s argument was based on circumstantial evidence.

Stevens’ argument included pointing out Quiroz had no clear motive to murder Calderon; none of the witnesses could identify Quiroz as being at the scene of the crime; there were multiple leads during the investigation that could have been further vetted (thus, leaving open the possibility of finding another prime suspect to arrest and charge); and there was no evidence found that directly links Quiroz to having committed the crime.

By law, it is up to the prosecution to carry the burden of proof. This means the state had to convince the jury beyond a reasonable doubt that Quiroz decided to kill Calderon with the previous intention of doing so.

“In criminal cases, the state’s proof must be more powerful than highly probable,” Stevens told the jury. “It has to be so convincing that you can look yourself in the mirror in a private moment and say ‘I am sure that not a single doubt I have about this case is reasonable’… You have to get there before you convict somebody of first degree murder. I submit to you that the state has fallen far short of that.”

The jury made the final decision to let Quiroz go, after deliberating within three hours.