Detectives find body, suspect it’s victim of a cold case
Believe they are the remains of man gone missing in 2007 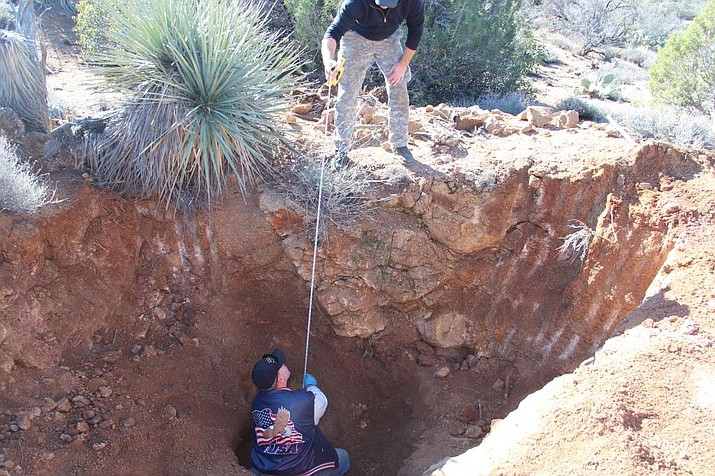 Detectives found human remains while looking for clues in a 2007 cold case that they suspect was murder. The remains have been identified as those of Larry J. Powers.

PRESCOTT – Yavapai County Sheriff’s detectives have long believed that Larry J. Powers, who went missing in 2007, was a victim of murder. They even had a suspect.

But they didn’t have the body, which makes prosecuting a murder case much more difficult.

After developing information that Powers, then 58, would most likely have been killed and buried in the area of a remote mining claim he was working near Bagdad, YCSO detectives flew a drone over the area last year and spotted a depression in the soil.

A preliminary excavation exposed a camp chair and other supplies, so plans were made to go back and do a forensic dig for evidence.

Investigators believe Anthony Richards, who was with Powers on April 9, 2007, when Powers was last seen, is a suspect in the murder.

The two men were partners in the Big Nugget mining claim near Bagdad.

Richards had made purchases on Powers’ credit cards that “directly benefitted” him after Powers’ disappearance, D’Evelyn said.

A long investigation of Richards resulted in a 23-count indictment that accused him of trafficking in stolen property, theft of a handgun, theft of a credit card, and 19 counts of identity theft, all with victim Larry Powers, who had been declared dead by a California court in 2012.

Richards was arrested in Oregon, and, in May 2016, was brought back to Yavapai County.

The discovery of Powers’ body “is expected to lead to homicide charges against Richards and some sense of closure for the victim’s family,” D’Evelyn said.

Richards is still in custody on a $100,000 bond after his May arrest, D’Evelyn added.