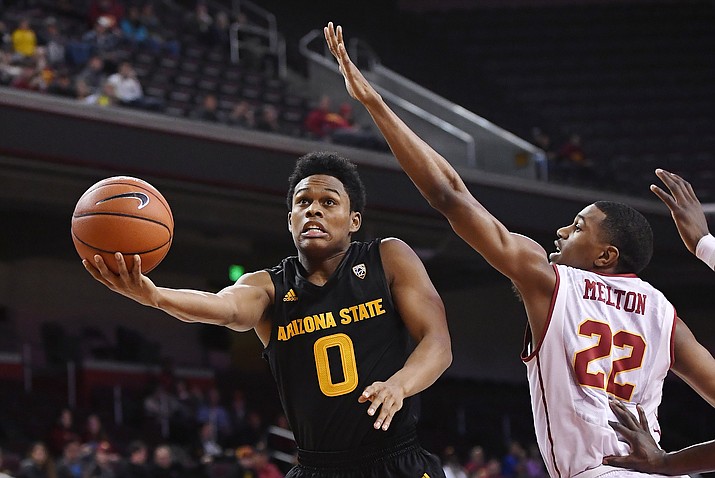 LOS ANGELES —Southern California’s rally against No. 14 Arizona came up short. This time, the Trojans let a double-digit lead nearly get away before hanging on.

“We’re back on track,” Stewart said. “We should be fine.”

Jordan McLaughlin added 18 points for the Trojans (17-4, 4-4 Pac-12), who stopped a two-game skid at Galen Center in salvaging a weekend split after losing to No. 14 Arizona. Stewart’s points were one off his career high and he tied his career best for 3-pointers. The Trojans equaled their season-best from long-range.

“We knew Stewart and McLaughlin would get theirs, but it was the others guys that hurt us and we have to do a better job to stop that,” ASU coach Bobby Hurley said.

Torian Graham scored 24 points, and Obinna Oleka had 17 points and 14 rebounds for the Sun Devils (9-11, 2-5), who got swept in their four-day visit to Los Angeles after losing at No. 3 UCLA.

“We couldn’t get the stops when we needed them, so we have to learn from this game,” Graham said. “After they went to a zone we had the ball standing still too long. We’re a team that likes to move it quickly, so when they went to a zone it threw off our rhythm.”

The Sun Devils got to 82-79 on a basket by Kodi Justice. After a timeout, Graham missed a 3-pointer with six seconds left.

Stewart fouled out with two seconds remaining and the Sun Devils had possession. But Shannon Evans II missed a 3-pointer from the left corner with just a second to go.

“Shannon had a shot at the end that is makeable,” Hurley said. “I would have liked to see it go in and for us to go to overtime.”

Arizona State trailed by 12 points and got within one point in both halves, but USC never gave up the lead.

Stewart hit a 3-pointer from the left wing and the Trojans were off on another scoring tear, with Stewart adding another 3 and Jonah Mathews adding two more treys that pushed their lead to 79-67.

In the first half, the Trojans hit four 3-pointers in a 20-6 run that gave them a 26-14 lead. Stewart made three treys and McLaughlin had two highlights assists in the spurt. Chimezie Metu dunked off McLaughlin’s bounce pass in the paint and Stewart followed with a dunk on McLaughlin’s alley-oop pass off Arizona State’s turnover.

USC closed with a 14-8 run to lead 45-38 at the break. McLaughlin banked in a 3-pointer from just past the midcourt line to beat the halftime buzzer after hitting two other treys, one of which beat the shot clock.

Arizona St.: They’ve lost four in a row and still face ranked opponents Oregon, UCLA and rival Arizona in the coming weeks. “We’re in a tough stretch and I thought tonight was our best chance for a win,” Hurley said. “I like the way we competed, but we now have to come home and play better.”

Arizona St.: The Sun Devils got outscored 34-32 in the paint. ... G Tra Holder had 14 points, well off his 23-point average in his three previous games in LA.