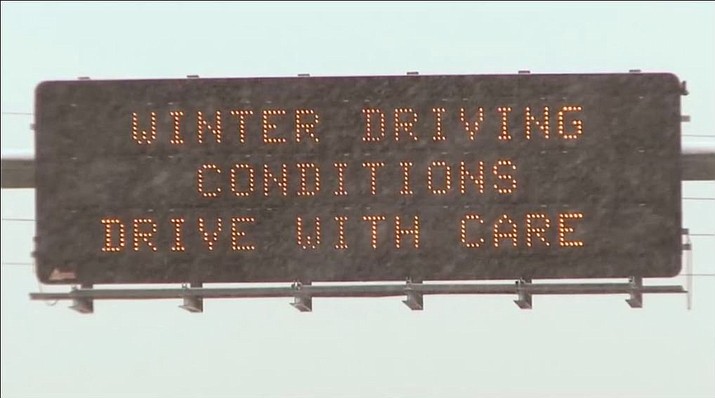 Highway conditions can deteriorate quickly during severe weather as snow accumulates and drivers struggle, and closures can happen suddenly and be prolonged.

The Prescott area, as of 9 a.m. according to Courier weather watchers, has anywhere from 2 to 6 inches of snow on the ground and more falling - depending on the location.

Driving will be extremely dangerous during this storm. For the latest road conditions and road closures, call the ADOT Freeway Management System at 1-888-411-7623 or visit www.az511.com.

FLAGSTAFF (AP) — The Arizona Department of Public Safety is advising drivers to put off any trips to northern Arizona as major snowstorms are hitting.

Spokesman Bart Graves said the department is discouraging drivers from heading north because conditions will be extremely dangerous.

In addition, the National Forest Service has closed all roads that lead to the Four Peaks and Mount Ord recreation areas in the Tonto National Forest northeast of Phoenix.

The Maricopa County Sheriff's Office says the closure is due to the snow and bad conditions.

The Weather Service says heavy snowfall will create extremely hazardous conditions on interstates 17 and 40. Those conditions will include heavy snow and wind that will reduce visibility and that travel delays are likely.

The Flagstaff area is being plummeted with snow.

According to the Weather Service, 12 to 18 inches of snowfall are expected in Flagstaff well into Saturday.

Other expected snowfall amounts include 13 to 14 inches in Munds Park along I-17 south of Flagstaff and 12 to 18 inches at Williams along I-40 west of Flagstaff.

Higher snowfall amounts include 21 inches at the Arizona Snowbowl ski resort in mountains above Flagstaff.

Winter storm warnings remain in effect for elevations above 5,500 feet until noon Saturday in Flagstaff and until Saturday evening in communities in the White Mountains of eastern Arizona.

Three storms are expected to parade across Arizona through early next week, dropping snow that already resulted in a few school closures in the high country Friday.