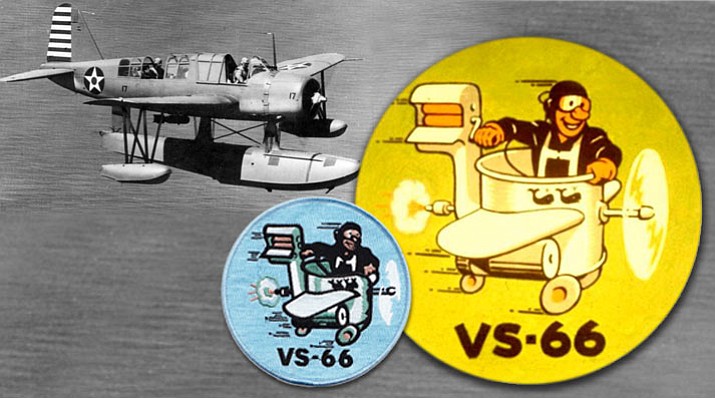 I recently read the book, Unbroken, which is set during World War II. In one chapter there is a brief mention of a man named Everett Almond. He did something that should not be forgotten. After reading the few sentences included in the book, I felt compelled to learn more about this man — a man whose name should be more than a notation on a massive government record of men lost at sea during the war. After searching through government reports and records, here is what I learned:

Radioman First Class Everett Hardin Almond was a navigator with U.S. Navy Squadron VS-66. He and his pilot, Lieutenant Arthur (Art) George Reading, were flying a two-man scout plane over the Pacific Ocean on May 16, 1943, when something went terribly wrong.

Today, you can find both of their names listed on a government record called the USN Naval Aircraft Factory OS2N Kingfisher Accident Reports. Next to their names is the four letter acronym, FLEF, which stands for Forced Landing due to Engine Failure.

The pilot was forced to ditch the plane into the ocean.

It is what happened after their aircraft hit the water that compels me to share their story.

Upon impact, pilot Art Reading was knocked unconscious. As the plane began to sink Almond made a decision that changed history for both men. Injured and bleeding himself, Almond could have extracted and inflated the rescue life raft from the Kingfisher and saved himself.

Instead, with what limited time he had, Almond worked to pull his pilot out of the cockpit. He then fastened a life jacket to the unconscious man, whom he then lashed to himself.

Almond tended and succored Reading until he regained consciousness. As Reading awoke, Almond began towing him toward the nearest island, 20 miles away. Soon the two men saw dark shadows circling them under the water. Almond had been bleeding since they ditched the aircraft. One of the sharks swept in, bit down on Almond’s leg and dove, dragging both men deep underwater. Then something gave way and the men rose to the surface in a pool of blood. Almond’s leg had been torn off. He then removed his life jacket and gave it to Reading, and separated himself from the pilot in order that the latter might have a better chance of survival. The 21-year-old Everett Almond then sank away.

Reading floated alone for the next 18 hours, kicking at the sharks and hacking at them with his binoculars. By the time a search boat found him, his legs were slashed and his jaw broken by the fin of a shark, but thanks to Almond, he was alive.

When I learn of stories such as this, my heart fills with gratitude. In this case, gratitude for a young man who reached out to help someone even at the very peril of his own life. I think of the love that 21-year-old young man must have had for his fellow man, and I wonder who it was that helped teach him the worth of a soul. I find myself feeling gratitude for those not recorded in the records — his parents perhaps, or a pastor or teacher whose example made an indelible mark on the young man’s heart as he grew up.

To all those parents, grandparents, teachers and preachers who strive to live their lives treating others with respect, courtesy and love — I thank you.

We see you in our daily lives. We see the difference you make in the way you treat others, the way you smile more, the way you open doors or pause to let someone go before you in a busy store or roadway. Thank you for the examples you provide for our young people.

I sometimes worry about the state of society when I see incidents of anger, hatred, road rage or crime, but then I see one of you.

We need not find ourselves fighting an ocean of sharks, or be required to give up our own mortality in some dramatic way in order to rescue someone. There are opportunities for actions just as noble and important placed in our path every day.

Special thanks to author Laura Hillenbrand for mentioning Everett Almond in her book, Unbroken. I borrowed a few sentences from her book to illustrate the story above. Hillenbrand is also the author of blockbuster bestseller, Seabiscuit.

If you like stories of valor, click here to learn more about Hillenbrand's book, Unbroken. You will discover the amazing story about another young man, Louis Zamperini. Zamperini was an Olympic athlete who became an airman, embarking on a journey that led to his doomed flight, a tiny raft, and a drift into the unknown.