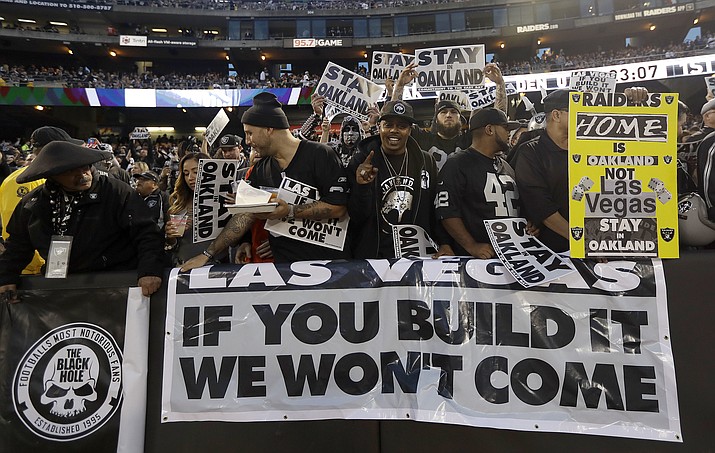 In this Nov. 6, 2016, file photo, Oakland Raiders fans hold up signs about the team’s possible move to Las Vegas during an NFL football game between the Raiders and the Denver Broncos in Oakland, Calif. The Raiders have filed paperwork to move to Las Vegas. (Marcio Jose Sanchez/Associated Press, File)

Once looked on with disdain by major sports leagues, this gambling city is now just 24 votes away from cashing in on one of the biggest sports jackpots ever.

The Raiders made it official Thursday by filing for relocation from Oakland to Las Vegas, the culmination of a whirlwind romance to bring an NFL team to a city that the league had previously gone out of its way to shun because of sports betting fears.

League owners are expected to vote on the move in March, and it’s hard to find anyone betting it won’t happen.

“I don’t know how you can put a price on this,” said Steve Sisolak, a county commissioner who has been involved in the efforts to land the team. “There are only 32 cities that can say they have an NFL team and we will be one of them.”

Actually, there is a price on it. Tourists will pay increased room taxes to fund $750 million of the cost of a new $1.9 billion stadium as part of a deal rammed through a special session of the Nevada Legislature by powerful casino owner Sheldon Adelson’s family.

The stadium will be just off the glittering Las Vegas Strip, where the Golden Knights will begin play this fall in a new arena of their own. The expansion hockey team is the first major sports franchise to call the city home.

“Without the Golden Knights I don’t know if the Raiders would have thought this was a viable market,” Sisolak said. “They kind of broke the glass ceiling.”

If approved, the move would be the third announced by an NFL team in a year as the league undergoes a geographic shift unlike any in recent history. The Rams returned to Los Angeles from St. Louis this season, while the San Diego Chargers will begin play in LA next season.

“(Raiders owner) Mark Davis is a man of his word and the filing of the Raiders’ application for relocation of the franchise with the NFL is a significant step in bringing the team to Las Vegas,” Nevada Gov. Brian Sandoval said.

The NFL has long been opposed to any association with Las Vegas, to the point where just a few years ago it refused to allow the city to advertise on the Super Bowl telecast because it offered legal betting. But the league’s opposition has softened, and so has the stance of Commissioner Roger Goodell.

“I think there are some real strengths to the Las Vegas market,” Goodell said at an owners’ meeting last month. “It’s clear the Las Vegas market has become a more diversified market, more broadly involved with entertainment, hosting big events. And there’s a growth to the market.”

Las Vegas, which has about 2.5 million people in the metropolitan area, would be a smaller market than the Bay Area. But fans from other cities are expected to fill a third of the proposed 65,000-seat stadium, and the team will also be able to draw on Raiders fans from throughout California.

Influential owners like Jerry Jones of the Dallas Cowboys and Robert Kraft of the New England Patriots have spoken favorably about the prospects of a move, and Raiders owner Mark Davis has been lobbying behind the scenes to secure the votes of three-fourths of the 32 owners needed for relocation.

The vote is expected to take place during league meetings March 26-29 in Phoenix.

Davis did not comment Thursday on the relocation application, but has made no secret of his commitment to Las Vegas. At a stadium meeting last year in the city he brought along a program from a 1964 American Football League exhibition game in the city where the Raiders beat the Houston Oilers.

Davis has said the team will continue to play in Oakland until the Las Vegas stadium is finished, likely by the 2020 season. There are two sites currently being looked at for the stadium, both adjacent to the Strip.

One possible hang-up could be Adelson’s participation in the project.

He’s the one who initiated conversations with Davis last January, and was instrumental in getting a tax increase passed by the state legislature in October.

Adelson’s family has offered $650 million toward the stadium, but has reached no deal with the Raiders yet. Team representatives say they have secured the funding to replace Adelson’s investment in case a deal isn’t reached. NFL rules prohibit casino operators from having ownership roles in teams.

Andy Abboud, the executive working on the project for Adelson, called the filing “one of those moments that makes it real” and vowed that necessary negotiations will be completed.

“The people of Las Vegas should be excited that the NFL is coming to town,” Abboud told AP. “Business deals take time to work out, but everything will work out in the end.”

The Raiders have two one-year options to play at the Oakland Coliseum in 2017 and 2018 and are already taking season ticket renewals for next season. But the Raiders have largely ignored a proposal by former player Ronnie Lott to build a new stadium in Oakland to keep the team permanently.

“We are in this game and we are playing to win,” Lott’s group said in a statement, vowing to push ahead.

Under Davis’ father, Hall of Fame owner Al Davis, the Raiders moved from Oakland to Los Angeles in 1982 then returned to the East Bay in 1995.