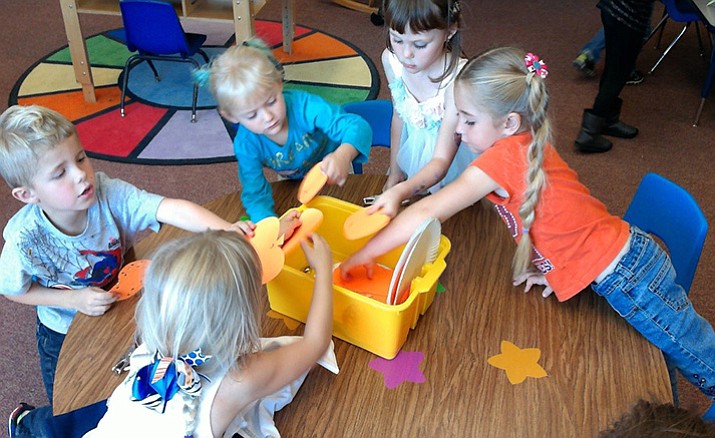 Students in one of Chino Valley’s Territorial Early Childhood Center explore an activity.

Six classrooms to house second-graders at Territorial Early Childhood Center next year will be made possible with the construction of a $100,000 pre-fab office building to house the district’s transportation, janitorial and food service personnel.

District Superintendent John Scholl informed the Governing Board on Monday night, Jan. 9, that the administration opted to erect a 1,000-square-foot pre-fab office building adjacent to the current transportation garage to free up needed classrooms at Territorial. The new structure that will be built on-site is slated to match the existing buildings.

Initial plans to erect a separate, larger manufactured building proved too costly, and so this plan will be less expensive and will better suit the district’s needs, Scholl explained.

The district had one-time money of about $250,000 set aside to accommodate renovation of the current transportation garage and a new building.

The new structure is now in the design phase but Scholl expects it will be ready by late spring so by the end of the school year teachers can prepare the vacated classrooms for the entering second-graders in the fall.

Territorial now houses pre-K through first grade. Del Rio Elementary has experienced growth such that the school requires more space for older students so the reconfiguration of grades was determined to be a better fit for the district’s existing school building, Scholl said.

If all goes well with the new structure and the remodeling of the transportation garage, Scholl said the district may gain some savings of the money that was initially allocated for those projects but that will be determined once all the work has been completed.

In other business, the Governing Board voted 4-0 with one abstention to spend $39,000 to erect a new LED message sign outside the Chino Valley High School. New member Annie Mortensen abstained from the vote.

The cost to erect the new sign will be paid through advertising revenue as well as from other activity-related funds and will be used to market a variety of school events and programs in the district. The new sign will be somewhat larger than the existing sign and with better technology will be easier to read, Scholl said.

Board member Sherry Brown said she believes this sign will prove an attribute to the district.

In other business, the Governing Board elected Penny Hubble as president and Cyndi Thomas as vice-president. The board also voted to change its meeting dates to the first Tuesday of every month at 5 p.m. The next board meeting will be in the district offices on Feb. 7.