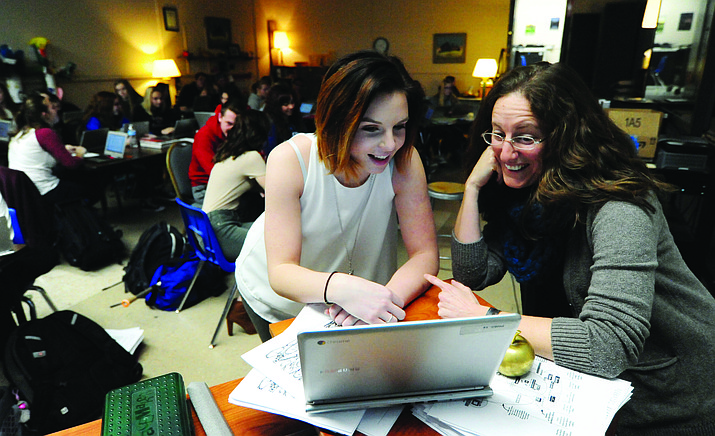 Mardi Read talks with Joe Howard about the upcoming Prescott Unified School District Board Retreat Thursday morning. Read said Howard has been her mentor since 2002. 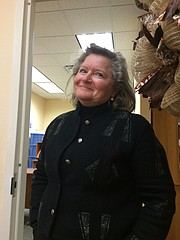 From our earliest moments, we are molded, educated and inspired by the people who enter and touch our lives: parents, grandparents, siblings, friends, neighbors, teachers, bosses, and community leaders.

The power of these individuals cannot be diminished, and for many those influences will dictate career and life paths and how they treat others.

Eight local leaders, from students to educators to non-profit and hospital executives, share with our readers who played those roles in their lives.

Cherry’s teaching style was fresh and creative, relying on song and dance to teach the language and infuse students with an appreciation of another culture.

Check is an award-winning teacher who inspires students “to want to do better and be better … no excuses.”

“I’ve never had a teacher push me the way she did,” Church said.

With both teachers, Church said she gained the “structure

and drive” and confidence to “put myself out there.” Both are role models who always saw the best in their students and gave them the incentive to reach beyond their own expectations.

“I will take the lessons I learned from them to push myself and to engage others; to pass it on,” said Church who next year will be pursuing a college degree in nursing and special education.

“The thing I’ve really learned from Joe, and other mentors, is that it can’t be about you; a leader helps develop other leaders,” Read said.

“You have to build relationships, listen to what other people have to say, and you want to collaborate,” Read said. “You want to be a coach.”

Howard offers opportunities for others to succeed, and builds confidence as their “cheerleader,” Read said.

From Howard, Read said she has learned the best leaders set an example for others: she said he “walks the talk.”

Read said she remembers hearing a quote that a leader is someone “who makes you feel good; is a person who care about you.”

“And (Howard) exudes that for me. He wants to see you succeed,” Read said. “Joe doesn’t feel like a boss but he’s a colleague. He’s there to help you achieve what you want to achieve.”

Ayers credits the founder of Embry Riddle Aeronautical University, John Paul Riddle, as his most influential educator, although their interactions were never in a classroom setting.

“He (Riddle) was engaged in Embry-Riddle from its birth until his death (in 1989),” Ayers recalled of the 1920s US Army pilot who started a small aircraft company that eventually evolved into the now world-class university with campuses in Daytona, Fla. and Prescott. “He was always eating in the dining halls, visiting the dormitories and spending time just talking to students.”

Riddle was known to attend student weddings and other such celebrations; a privilege Ayers and his wife, Debbie, have enjoyed with students over the last 16 years in Prescott.

“For someone in his 80s to be a constant presence with our students, to listen and care for their concerns, is pretty amazing,” Ayers said. “He was my inspiration to put students first.”

The university’s student-centric philosophy is a direct tribute to Riddle’s example, Ayers said.

“My job, and John Paul Riddle felt the same way, is not to do things for me. My job is to take care of them (students), and ask questions about what they need so we can support them better.”

Bert Ijams, executive director of Meals on Wheels in Prescott:

Ijams recalls her long-ago art teacher James Nastasia at Bankcroft Middle School in Los Angeles as someone who “opened the door in my imagination that didn’t have boundaries or lines.”

He wanted students to think about “what is possible, and that philosophy has permeated with how I approach life.”

“Every morning, I wake up and think about what’s possible today,” said Ijams, a longtime art advocate who at one time served as director of the then-Prescott Fine Arts Association and who for the last 3.5 years has headed up the Meals on Wheels organization. “How can we as an organization, working within our mission, serve our population in the best way possible?”

Nastasia’s philosophy on life is one Ijams said has helped her feel “very fulfilled in my personal and professional life.”

Indeed, Nastasia’s teachings are behind the inspiration she had in her mid-30s to craft a personal missive.

“The first line reads, ‘I will always use my life to serve a greater good,’” Ijams said.

Newman counts the blessings of many “educators” in his life: his parents and seven siblings, Jesuit teacher at his Roman Catholic high school in Phoenix, and a founder of an area Easter Seals camp.

“I’ve had remarkable role models who put up with me when they could have left me on the side of the road,” said Newman, an outdoorsman from when he was put in a saddle as a toddler.

In high school, Newman said the Jesuits were determined to turn the “class clown” “into something more productive.”

Then came Henry Dahlberg, the founder of the Mingus Springs Easter Seals camp who introduced a 16-year-old “hippie cowboy” to what turned out to be a lifelong passion for those with developmental disabilities. It was Dahlberg who convinced the YEI Board of Directors to hire him, a “goofy kid whose heart was in the right place.”

“I still confer with him to this day,” Newman said. “He is still a wonderful teacher.”

In his 41 years at YEI, Newman said he has encountered other role models, including several board members who share his vision and enable him to be a source of encouragement and hope for others.

“I only hope to emulate what they have all shown to me, and that is to be a role model,” Newman said.

An avid believer in lifelong learning, Nicol said she has been fortunate to have a multitude of inspirational teachers over her 31-year career in Prescott, many of them the staff, volunteers and donors who are part of the hospital organization.

“So many of these people have wonderful nuggets of wisdom to offer, and I honor that so deeply,” Nicol said. “People can inspire from what they say, and some by who they are as a person.”

In her graduate school years at Iowa State University, Nicol said she was the research assistant for a business administration professor, William Thompson, a “distinguished and kind gentleman” who diminished her trepidation about new tasks with his confidence in her abilities.

The self-esteem and “can-do” attitude he inspired is something Nicol said she has carried with her throughout her personal and professional life.

An ornamental sign with a quote from Winston Churchill hangs above her desk, one she wholeheartedly endorses: “We make a living by what we get. We make a life by what we give.”

Null’s educator/mentor is University of Nevada nursing professor emeritus Rita Farnham, the undergraduate and graduate educator who encouraged him to pursue psychiatric nursing in the second half of a 40-year nursing profession.

“She was really instrumental in getting my career going. She was a master clinician who was a wonderful and knowledgeable lady,” said Null, who served four years in the U.S. Army prior to becoming first an emergency room nurse and then a psychiatric nurse.

“She had this uncanny ability when it came to group therapies,” Null recalled. “She could take a roomful of angry people and she could just settle down the whole room and get them to focus.”

Null said he often relied on her strategies when doing his work with combat veterans.

“She taught me listening was the greater part of any intervention; to try and show empathy and again, calm people down so they could become focused and directed toward their treatment,” Null said. “I hope I have been able to impart just some of what Rita imparted to me.”

When it comes to the most influential teacher in his life, Veil is quick to answer: “My father.”

Fred Sr. was an electrical engineer who never earned a college degree. Rather he was a man of determination and persistence who encouraged his children to be the best they could be.

“He taught me values I’ve followed all of my life: honesty, integrity, and commitment to what you do and competitiveness … he always wanted us to strive to be better,” Veil said.

A “reformed lawyer,” Veil said two of the other major educator/influences in his life were his football coach at Hastings Elder High School in Hastings, Pennsylvania, John Nevins, and U.S. Marine Corp Capt. Gordon Strand.

As his football team’s captain, Veil said he spent a lot of time with Nevins learning how to get the most out of his team members, to help each team member be the best at their position. In the Marine Corps, Veil said Strand taught him how to command others such that they not only followed because they were required to do so but “because they recognize a goal that needs to be accomplished.”

From all those educators, Veil said he believes he has become a leader who mirrors to those he supervises qualities of “respect, appropriate ethics” when it goes to “getting the job done.”