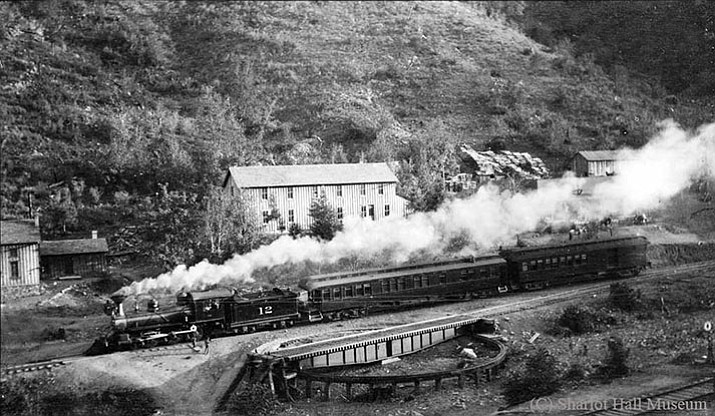 Central Arizona’s mineral riches first drew Anglo prospectors in 1863. Gold was the original metal, but silver and copper were also discovered and mined with more or less success. Remote locations and mountainous terrain made moving the ore and building smelters to process it very difficult. Large freight wagons pulled by multiple mule teams were the only source of transport.

The use of railroads continued to grow into the 20th century, allowing people to travel more quickly and transport goods and luxuries. Trains also increased tourism in Arizona and throughout the Southwest.

Although the First Territorial Legislature authorized building a railway in 1864, it was 13 years later when that actually occurred as the Southern Pacific Railway crossed the Colorado River at Yuma, Arizona Territory. The Atlantic and Pacific Railway completed a line west to Kingman, Arizona Territory, in 1882. What was needed was a rail line to Prescott and the mines.

Spearheaded by then-Territorial Gov. Frederick H. Tritle, the Prescott and Arizona Central Railway was formed with backing from Eastern interests who invested in Yavapai County bonds to fund the project. Railroad builder Thomas S. Bullock was chosen to build the line. It connected with the Atlantic and Pacific at Prescott Junction, which is present day Seligman.

The line was completed to Prescott on Jan. 1, 1887. Using lightweight rail from the Atlantic and Pacific as well as leased rolling stock, the railroad was plagued with problems due to the rush to complete the line. It ceased to operate in 1893 leaving a legal mess behind.

Railroad building inducements by the 16th legislature caused the creation of the Santa Fe, Prescott and Phoenix Railway. Organized by Frank Murphy with help from Chicago financiers, this connected the Prescott line with the Atlantic and Pacific Railway at Ash Fork. By 1895 the tracks ran to Prescott, over Iron Springs to Congress Junction and on to Phoenix.

The Atchison, Topeka and Santa Fe Railway was chartered in 1859 to link Atchison and Topeka, Kansas, with Santa Fe, New Mexico. As it pushed west, it eventually bypassed Santa Fe due to rough terrain. It contracted with the Atlantic and Pacific Railway for a line across Arizona. It had contracts with numerous other smaller railroads, including Frank Murphy’s holdings. Ownership of Murphy’s lines passed to the Santa Fe Railway in 1911.

As railways had expanded in the 1800s, so they began to shrink in the 20th Century. The train to Crown King ceased operation in 1926. The Poland line ended in 1939 and the Prescott and Eastern tracks were removed in 1949. In an attempt to improve service to Phoenix, the Santa Fe Railway decided to bypass Prescott. It installed the Abra-Skull Valley line in 1962, leaving Prescott as a spur line with only freight service. This section was abandoned in 1983 after a series of winter storms washed out one of the bridges into town.

The Sharlot Hall Museum recently opened a new exhibit called “Meeting the Four O’clock Train,” which focuses on local railroad history. To celebrate, Al Bates will give a free lecture entitled “Prescott’s 1893 Railroad War” at 2 p.m. on Jan. 21, at the museum. Be sure to arrive early, as seating is limited.