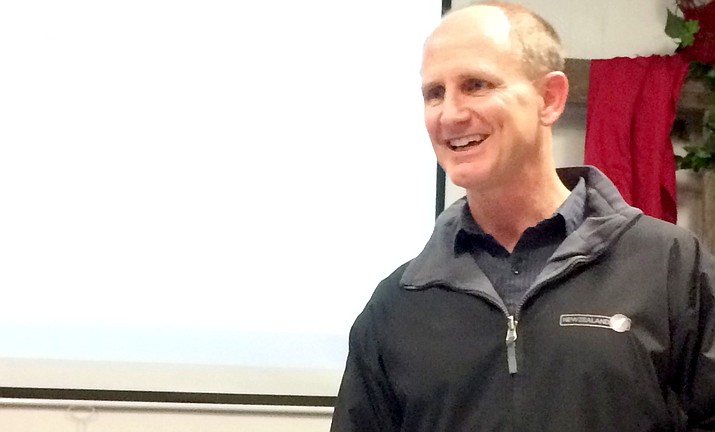 During five years, from 2010 through 2014, ADOT reported these incidents on Highway 89 for the 13 miles north of Perkinsville Road:

Since 2014, there have been an additional two fatalities

Plans to widen Highway 89 to four lanes on a 13-mile segment of road between Chino Valley and Paulden came as welcome news to most of the more than 60 audience members attending the Jan. 5 Paulden Area Community Organization meeting.

Only one resident expressed concerns that a wider road would bring developers; he preferred building passing lanes instead a widening of the highway.

Alvin Stump, Northwest District engineer with the Arizona Department of Transportation (ADOT), presented plans and a rough timeline for proposed work on Highway 89 extending from Road 3 North at the north end of Chino Valley northward to past the Wishing Well intersection within the Kaibab National Forest boundary.

Traffic congestion and accident issues on this stretch have led ADOT to plan for widening the road to four lanes, adding turn lanes, and putting in roundabouts.

At the mention of roundabouts, some in the audience voiced their disappointment. However, as the meeting progressed, many defended the benefits of roundabouts.

“I can appreciate not everybody’s a fan of roundabouts. I’m not a fan of signals,” Stump said. “You put in a signal, it doesn’t control the speed. Drivers still blow through the intersection. Roundabouts force you to slow down. Fatalities are reduced by 90 percent.”

Most of the 203 accidents reported between 2010 and 2014 occurred between Road 3 North and Road 4 North, Stump said, with a significant number between Rolling Hills Road and Paulden.

Based on traffic count studies at intersections, ADOT plans to expand Highway 89 to four lanes with a raised 8-foot median and 5-foot sidewalks on both sides between Road 3 North and Road 5 North. From Road 5 North to Sweet Valley/Old 89, it also plans four lanes with an open median with 4-foot shoulders, and 10-foot shoulders on the outside, including turn lanes at key intersections.

Traffic at Big Chino Road is approaching the point of needing a signal, Stump said. Little Ranch Road and Bramble Road are good candidates for roundabouts.

ADOT will be adding turn lanes through Paulden where the Post Office and the Pink Store are located, and may drop the speed limit to 45. This is in the design stage now.

Based on attendees’ comments, other proposals ADOT is looking at met with their approval. These include full intersections at Old 89, Frontier, Rolling Hills, Little Ranch and Sweet Valley roads; a passing lane between Old Highway 89 and Frontier Road; and passing lanes further north between the forest boundary and Hell Canyon.

The time frame for completing the work is based on availability of funds. County Supervisor Craig Brown said the county lost about $13 million in Highway User Revenue Funds (HURF). He supports taking “baby steps” by breaking the 13-mile segment into smaller projects, as ADOT is proposing.

“When there is a little bit of money left over from other (ADOT) projects, we’ll fight for that money,” Brown said.

The entire project could take up to 20 years and about $60 million to complete.