Justin Thomas holds on to beat Hideki Matsuyama at Kapalua 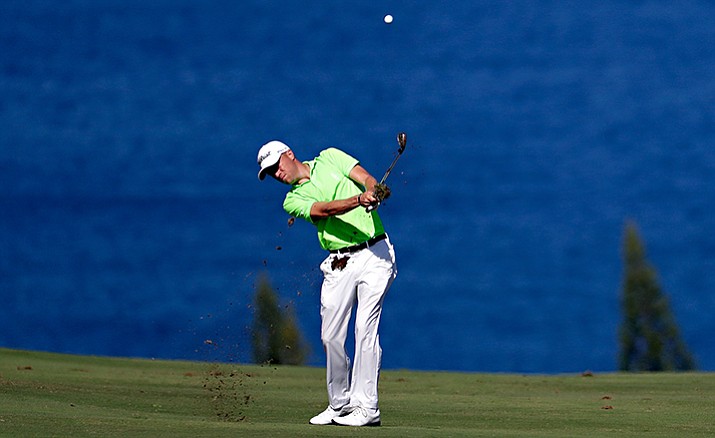 Justin Thomas hits from the fourth fairway during the final round of the Tournament of Champions golf event, Sunday, Jan. 8, at Kapalua Plantation Course in Kapalua, Hawaii.

KAPALUA, Hawaii — Justin Thomas kept reminding himself that a one-shot lead with two holes to play is never a bad place to be on the PGA Tour.

Ignoring that his five-shot lead was nearly gone against Hideki Matsuyama, Thomas thought more about the great golf that had put him in this position Sunday at the SBS Tournament of Champions. He responded by hitting an 8-iron from 214 yards on a downhill lie that was so pure he stopped to admire it before it landed.

It plopped down in front of the pin and settled 3 feet away for a birdie.

Matsuyama three-putted for bogey, and Thomas was on his way to a comfortable victory at Kapalua that moved him into the conversation of golf's young stars.

"The best shot I hit this week," Thomas said. "There's a tree that's a little slanted, and it's a perfect aiming point. I just kind of aimed it there and made sure I held onto the club, if anything, to make sure my miss was right. ... And really, I just flushed it. As soon as it came off, I knew it was going to be perfect."

Matsuyama, going after his fourth straight victory worldwide, knew he needed to make his 30-foot birdie putt to stay in the game. He ran it 8 feet by, missed the par putt coming back and was out of chances when Thomas hammered another tee shot on the par-5 18th.

Thomas closed with a two-putt birdie for a 4-under 69 and a three-shot victory, his second of the PGA Tour season that moved him to No. 12 in the world. His other two PGA Tour title were at the CIMB Classic in Malaysia.

"I think it's potentially floodgates opening," said Jordan Spieth, his best friend in golf since they were teenagers. "The guy hits it forever. He's got a really, really nifty short game. He manages the course well. He's playing the golf course the way it should be played, and honestly, he's taking advantage of the easier holes.

"It's awesome to see," Spieth said. "He's going to be tough to beat next week, too."

Matsuyama, who made two soft bogeys on the front nine to fall five shots behind, made it more of a game than anyone expected. The 24-year-old from Japan holed a flop shot for eagle on the 14th hole, and then Thomas hooked a 4-iron into the hazard on the par-5 15th hole and made double bogey.

Just like that, Thomas went from a five-shot lead to a one-shot lead, and Matsuyama had a 10-foot birdie putt on the 16th to tie for the lead. The putt narrowly missed, and Thomas answered with his 8-iron for birdie to end it. Matsuyama closed with a 70.

Thomas is the only player to beat Matsuyama over the last three months. In his last six tournaments worldwide, Matsuyama had four victories and a pair of runner-up finishes — both to Thomas, in Kuala Lumpur and Kapalua.

Thomas, who finished at 22-under 270, said his immediate thoughts were booking a return trip to Kapalua next year for the winners-only event.

The scenery down the 18th toward the blue Pacific, where humpback whales spent the afternoon breeching and splashing their tails, was even better because his parents were watching him win for the first time. His father, Mike Thomas, is a longtime head pro in Harmony Landing in Kentucky who is still his coach.