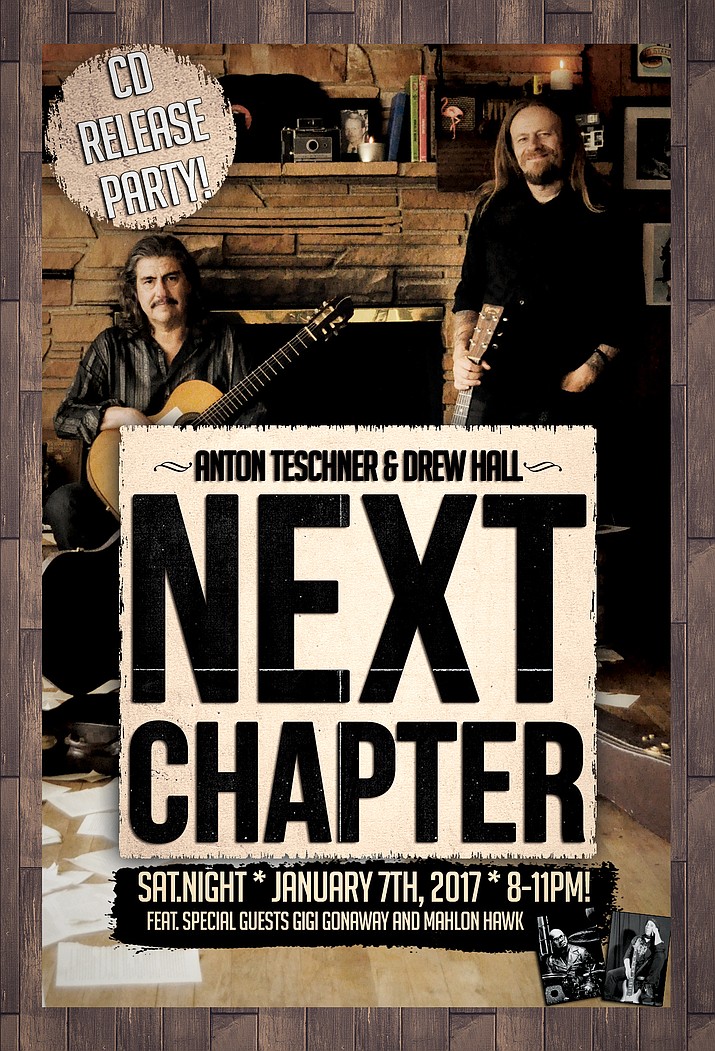 The local acoustic duo Anton Teschner and Drew Hall are set to release their third album, “Next Chapter,” during a special performance at The Raven Café this Saturday, Jan. 7.

Well-known for their clean and engaging performances around town, Teschner and Hall have been playing as a duo for about 12 years.

“We’ve been playing a lot, but we haven’t been recording, so people have been asking for it and asking for it,” Hall said.

To mark the occasion, the duo is trying something new by having a percussionist and bassist play with them at the Raven.

“For the party, I wanted to give people who come see us a completely new thing to see,” Hall said.

On the drums will be will be veteran touring/studio drummer Gigi Gonaway. Gonaway has played with the likes of Mariah Carey, Whitney Houston, Aretha Franklin and Steve Winwood.

On the bass will be Emmy award-winning bassist Mahlon Hawk.

Per usual, there will not be a cover charge to see the performance.

Unlike their previous CD — which was entirely instrumental — Hall sings in many of the songs.

“We’ve had a decent number of vocal tunes that had never been recorded; some new, some old,” Hall said.

While several of the songs are covers, such as “Bohemian Rhapsody” and “Another Brick in the Wall,” it all carries the Anton & Drew feel.

“Everything that we do is what I would call original arrangements,” Hall said.

What makes this CD release party even a little more special is that for quite a while it was unclear whether the album would even be finished.

Soon after they began recording the album last March, Teschner came down with a serious case of meningitis, which commonly causes inflammation of the brain and spinal cord membranes and is typically caused by an infection.

The illness significantly impacted his motor functions and left him unable to play the guitar for several months.

“That was pretty scary at that point to have a question in my mind if I was even going to be able to play guitar again,” Teschner said.

Teschner survived the bout, but it left him with a damaged heart valve, so he ended up getting open heart surgery in August.

“After quite a few months of practice with a metronome, I was able to get a lot of my motor skills back,” Teschner said.

However, the meningitis had affected his memory, causing him to completely forget how to play several of the songs he was previously well-familiar with.

“I kind of had to start from scratch again,” he said.

Fortunately, he retained his musicality and was able to relearn the songs relatively quickly.

“It was kind of a harrowing experience overall; getting everything ripped away from you and kind of fighting to get it back,” Teschner said.

Despite the struggle, Teschner believes he’s back to par and said he’s grateful for the friendship and support Hall has given him through these tough times.

“Through it all, Drew has been there for me,” Teschner said. “I thank him for that. There’s just no way to express all of that. Music is really important to both of us and he maintained that importance throughout all of this. I’m really looking forward to the CD release. It’s just going to be a blast.”