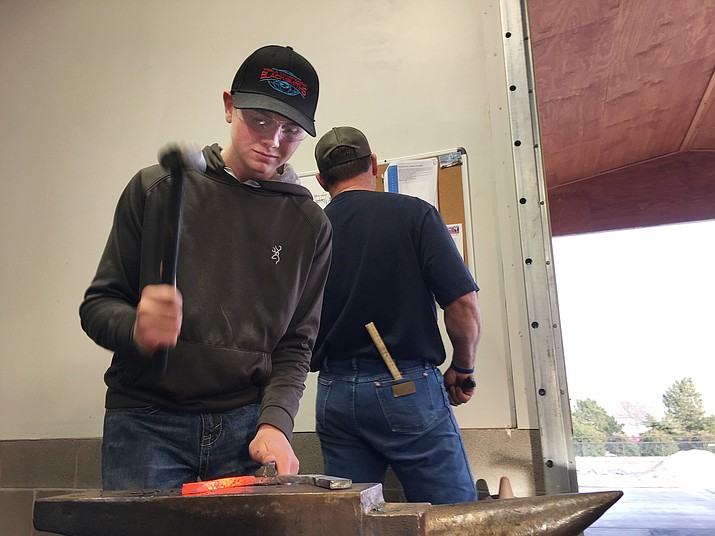 Chino Valley High School sophomore Cole Looper works on what will become a horseshoe on Dec. 20 in Chino Valley at the home of Shaun Woodsum (back).

Shaun Woodsum of Chino Valley says he’s been blacksmithing since 1991, so he was a little bit more than skeptical when a friend made a request.

“He’s 15, he was introduced by a friend of mine who said he was interested in learning how to make shoes for this contest that was coming up in [Las] Vegas,” Woodsum said. “I’m sitting there counting the months, “You only have two months and Cole has never turned anything at all with a pair of tongs.”

Cole Looper, a sophomore at Chino Valley High School, was one of only two teens to compete at the Dec. 8-10 World Championship Blacksmiths competition in Las Vegas.

Despite his inexperience, Looper finished 10th out of 18 competitors in his class.

“I wasn’t very relaxed,” Looper said. “Everybody seemed to be pretty impressed with how I placed, but I would have liked to have done better.”

To do so, Looper had to learn the basics quickly. Woodsum said he gave Looper a straight piece of metal, and told him to turn it into a circle. Then, once he had done that, he told him to make it straight again.

“He did that several times,” Woodsum said with a laugh. “Reason is, he’s got to learn to put his tongs in the right place, and it teaches your arm too. That was his first lesson, for a long time, before we ever made a horseshoe.”

Looper, who also wrestles for the varsity team, said he became interested in blacksmithing because his father owns a lot of horses.

“Shoot, too many to count, honestly, like 30-something, but only one of them is mine,” Looper said. “We got barrel horses, rope horses, babies, everything.”

With that many horses, someone has to put shoes on them. Many horseshoes are made by machine, but Woodsum said there is still a need for blacksmiths to make sure you get the right fit. It’s something that Looper repeated.

Chino Valley farriers Dan and Logan Salcito were the first to tutor Looper. Woodsum acted as his striker during the competition.

Woodsum said it’s rare to see a teen who doesn’t come from a family of blacksmiths, become interested in it.

“Most guys get into it in their early 20s,” Woodsum said.

Woodsum learned the craft at the Western School of Horseshoeing in Phoenix, which closed in 2004.

“It was around for quite a while, and then, finally, everybody just stopped teaching,” Woodsum said. “The people that were teaching there passed away, or lost interest. That was it. There was no shortage of students.”

Looper says he plans to stick with blacksmithing for the long term and enter more contests as he progresses.

“I think it’s going to be a big asset in shoeing horses correctly, and that’s what I want to do, to shoe horses,” he said. “And it’s fun, it’s really cool.”