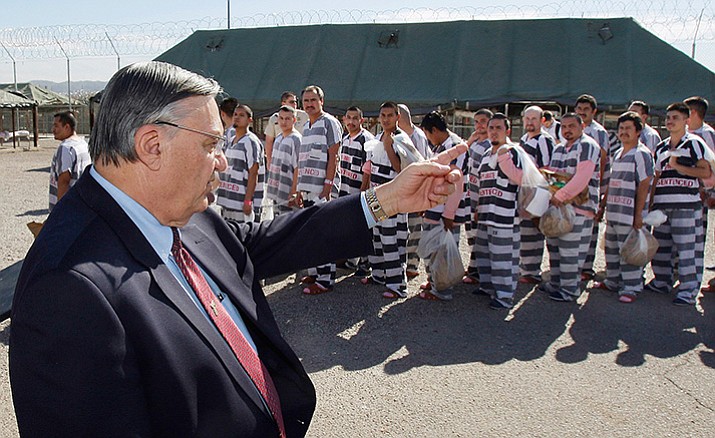 Maricopa County Sheriff Joe Arpaio, left, in 2009 orders approximately 200 convicted illegal immigrants handcuffed together and moved into a separate area of Tent City, in Phoenix, for incarceration until their sentences are served and they are deported to their home countries. Arpaio has left office with a mixed legacy on immigration, jails and other key issues.

PHOENIX — The full-throated bravado that made Sheriff Joe Arpaio a household name in debates over illegal immigration and the treatment of jail inmates was missing as he started his last news conference in a law enforcement career that spanned a half-century.

After being charged with a crime and booted from office by voters, the 84-year-old Arpaio looked tired and dispirited as he defended his investigation of President Barack Obama’s birth certificate — a debunked controversy that critics say Arpaio exploited to raise money.

Maricopa County Sheriff Joe Arpaio listens to a video presentation Dec. 15, 2016, of the findings from a five-year investigation into the authenticity of President Barack Obama's birth certificate during a news conference in Phoenix. Arpaio has left office with a mixed legacy on immigration, jails and other key issues.

The sheriff mispronounced several words as he attacked the birth record of the president he blames for his political demise. The media-savvy lawman ended the news conference by uncharacteristically declining to mix it up with reporters about the credibility of the five-year Obama investigation by his volunteer posse.

He told his 75 supporters in the room that the investigation wasn’t about whether Obama was born in the U.S. and instead focused on a claim that the birth certificate was fraudulent.

“This is tough for me to say — believe me, all of you media know me,” Arpaio said. “Sometimes I get diarrhea of the mouth. But I am going to tell you, we are not going to answer any questions. There is more sensitive information that we have regarding this matter, and I am not going into it.”

The investigation was another questionable tactic in Arpaio’s 24-year tenure as the sheriff of metro Phoenix that ended Jan. 1 and was also marked by traffic patrols and business raids that targeted immigrants; decisions to house jail inmates in tents, dress them in pink underwear and make them work on chain gangs; round up dead-beat parents; and arrest animal abusers.

Arpaio’s critics say he was a bully who was driven by a hunger for publicity and who treated powerless people harshly because it was popular with voters.

Attorney Mike Manning, who filed several lawsuits against the sheriff over in-custody deaths, said the lawman will be remembered for bringing a “culture of cruelty” to his jails.

Arpaio stepped over the line when he treated inmates awaiting trial as if they were hardened criminals, even though the Constitution prohibits punishing people before they are convicted of crimes, Manning said.

“He wanted those jails to punish and hurt those detainees,” Manning said.

Supporters counter that Arpaio is a standup guy who did what the public wanted and was the only local police official to do something about illegal immigration.

Tom Morrissey, a retired chief U.S. marshal who has been a friend of Arpaio for more than two decades, believes history will be kind to the sheriff.

“He will be celebrated and remembered 100 years from now, like Wyatt Earp was,” Morrissey said, referring to the Old West sheriff credited with taming Tombstone.

Arpaio took big chances in using jail tents and dressing inmates in pink underwear and was correct in taking on illegal immigration a decade ago when voters demanded action and state lawmakers passed laws to confront the problem, Morrissey said. But in doing so, he said, Arpaio was unfairly portrayed as anti-Latino. “Believe me, there is a lot of support for him in the legal Latino community, but it just didn’t get played that way,” Morrissey said.

Lydia Guzman, a Latino civil rights advocate who helped organize volunteers to video-record encounters between officers and motorists during the immigration patrols, said Arpaio turned his back on the Hispanic community by caving in to public pressure to crack down on illegal immigration.

“Joe is a politician and has to get re-elected, so he did what he had to do to get himself elected,” Guzman said.

Arpaio, through a spokesman, declined a request to speak about his legacy. “I built a reputation in this world,” Arpaio said in an interview days after his defeat in November. “Everyone knows who the sheriff is. That’s one advantage. I’ve worked hard in this life.”

State Sen. John Kavanagh, an Arpaio friend and proponent of tough crackdowns on illegal immigration, said the lawman gained popularity because he created a law-and-order persona that connected with voters.

“He wasn’t afraid to speak his mind, even if it was politically incorrect,” Kavanagh said. “He was an elected sheriff — he didn’t have to worry about a town council firing him. He could be straight up with people, and he was.”

That base of devoted supporters and impressive fundraising helped Arpaio get elected to six terms.

Now, Arpaio has left office after being charged with a crime himself — misdemeanor contempt-of-court for prolonging his immigration patrols against the orders of a federal judge. Arpaio has acknowledged the contempt violation but says it wasn’t intentional. He could face up to six months in jail if convicted.

In recent years, Arpaio’s reputation for being tough on criminals was undermined by his failure to adequately investigate more than 400 cases alleging sex crimes, including dozens of child molestation reports.

Arpaio did investigate a number of county officials and judges who were at odds with him in political and legal disputes. But the investigations eventually collapsed, and county taxpayers had to pay $8.7 million in lawsuits filed by people who said they were investigated on trumped-up allegations.

In all, the sheriff’s office racked up $130 million in taxpayer-funded legal costs during the tenure of Arpaio, who was trounced in the November election by Paul Penzone, a little-known retired Phoenix police sergeant.