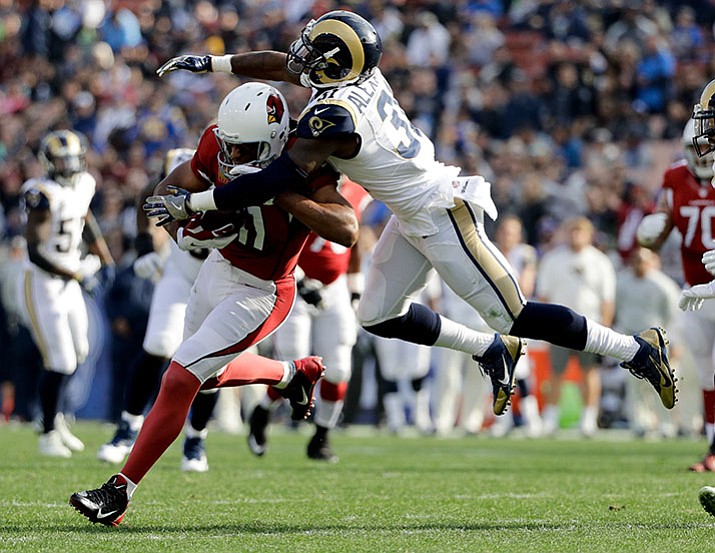 Yet if the star receiver realizes that if he can't end his career holding the Lombardi Trophy, catching a touchdown pass to win the NFL receptions title in a dominant victory wouldn't be a terrible substitute.

Carson Palmer threw touchdown passes to Jeremy Ross, Darren Fells and Fitzgerald, and the Cardinals wrapped up a frustrating season with a 44-6 victory over the freefalling Los Angeles Rams on Sunday.

Fitzgerald caught five passes and took the overall NFL lead with 107 catches in perhaps his final game for the Cardinals (7-8-1).

He intends to take his time with his decision on retirement following his 13th NFL season, even after he returned to the field in the fourth quarter for that TD grab and chants of "Larry! Larry!" from the Coliseum crowd.

"It's disappointing, but we really finished the season on a high note," said Fitzgerald, who moved ahead of Pittsburgh's Antonio Brown and New England's Julian Edelman with his last catch.

"I always stay in the moment, and the game wasn't over yet. I was still honed in and focused on what we had to accomplish. ... I approach the offseason the same way all the time: It's jet-setting time."

The Cardinals missed the playoffs one year after reaching the NFC championship game despite an offense and a defense ranked in the top quarter of the league.

"I'm very happy with the way we played in the last two weeks," coach Bruce Arians said. "But I'm unhappy that we did not win four or five games in the fourth quarter (earlier in the season)."

The Cardinals' defense sacked Jared Goff seven times and allowed just 122 yards by the Rams, who wrapped up their homecoming season with their worst record since 2011.

"I'm not sure there is much" of a bright spot to this season, Goff said. "Maybe that we have a change coming that is going to be positive and bring a lot of positive energy."

With a blowout win capped by Justin Bethel's 68-yard TD return of Sean Mannion's interception with 8:06 to play, the Cardinals also got even for their 17-13 loss to the Rams in Week 4, one of several early flubs that doomed an injury-filled roster to an early winter.

Los Angeles was 3-1 after that road victory, but lost 11 of its final 12 games in an incredible pratfall.

"This isn't the culture you want to live in," offensive tackle Rodger Saffold said. "I've been here seven years and still haven't had a winning season. I know I've worked hard enough to deserve better."

Despite managing just 77 yards of offense in the first half, Los Angeles kept Arizona's lead to 16-6 with a handful of big plays, including a blocked punt by Chase Reynolds.

David Johnson left the field on a cart in the first quarter with an injured left knee after getting tackled awkwardly, but Arizona's star running back appeared to be able to put weight on his leg when he returned to watch the second half from the sideline.

Johnson gained 100 yards from scrimmage in each of the first 15 games for the Cardinals while compiling the franchise's first 2,000-yard season. The Cardinals had no immediate update on his prognosis.

"We're praying it's all positive, and I can block for him in the Pro Bowl in the next couple of weeks," Fitzgerald said.

Goff wrapped up his winless rookie season by going 13 of 20 for 120 yards while getting physically clobbered by yet another defense. The No. 1 overall pick went 0-7 with seven interceptions and five TD passes for the Rams, who lost their final six home games.

The Rams managed 482 yards in their final three games under Fassel, including 81 yards in the first three quarters against Arizona. They will finish as the NFL's 32nd-ranked offense for the second straight season.

Palmer went 20 of 38 for 255 yards in a solid return to the stadium where he won the Heisman Trophy 14 years ago with Southern California. He hadn't been back inside the Coliseum since throwing four touchdown passes to beat Notre Dame in November 2002.

The Rams went nowhere on offense for their first 5 1/2 drives before back-to-back big gainers, but even that went wrong. After Todd Gurley caught a 29-yard pass, Tavon Austin ran 38 yards for a TD on a direct snap to the wideout — but it was wiped out by an illegal motion penalty against Goff, of all people.