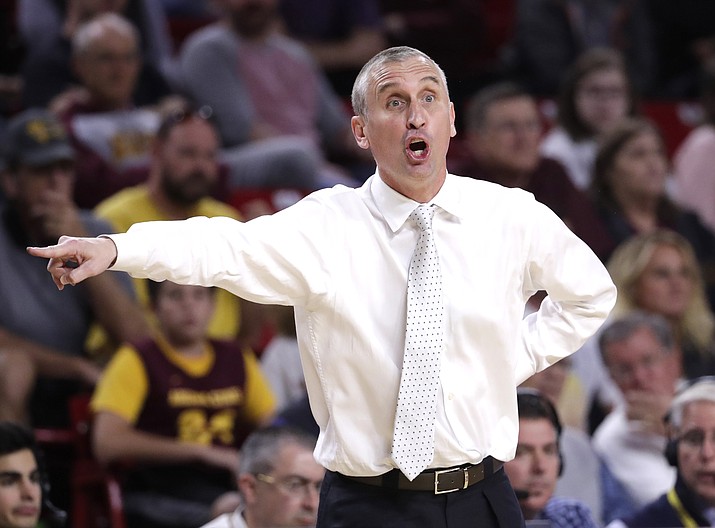 TEMPE, Ariz. — An improbable, furious Arizona State comeback has added to the recent woes of the USC Trojans.

The Sun Devils rallied from six points down in the final 30 seconds to stun USC 83-82 on Sunday on Tra Holder’s two free throws with 6.9 seconds to play.

“I am thrilled except you know probably the few weeks or days that’s been taken off my life due to having to go through that game and coach it,” Arizona State coach Bobby Hurley said. “But what a great feeling.”

Trailing 82-76, Holder scored on a driving layup with 28.9 seconds to go. Elijah Stewart missed the front end of a one-and-one for USC and Kodi Justice followed with a 3-pointer to cut the lead to 82-81 with 14 seconds left.

Bennie Boatwright threw away the inbound pass and Holder drove the lane and was fouled. He calmly sank both free throws and Boatwright’s 3-point try bounced off the rim at the buzzer.

“I couldn’t really see what happened,” USC coach Andy Enfield said. “Obviously, not our first or second option but that play shouldn’t have determined the game. We missed open shots, turned the ball over. We were up eight (actually 10) and just threw it to the other team, we missed a front-end of a one-and-one, we missed a right-hand layup and we missed another free-throw.”

The Sun Devils won despite an off scoring night from Torian Graham, the Pac-12’s No. 2 scorer at just under 19 points per game. Graham made 2-of-12 shots and was 0-for-7 from 3-point range, scoring four points.

But he did pick off Boatwright’s inbounds pass that led to Holder’s game-winning free throws.

“We have a coach that builds that into you every single day,” Justice said. “You know you’re never out, you’re always fighting, you never give up.”

Chimezie Metu had 14 points and a career-high 13 rebounds for USC. He also sank a 3-pointer from the top of the key at the buzzer to give USC a 48-47 halftime lead, his first made 3 in three career attempts.

Holder scored and Metu followed with a dunk and USC led 81-71 with 4:16 left. It was the Trojans’ final field goal of the game.

The Trojans’ last point came when Metu made one of two free throws with 2:08 to play, putting USC up 82-76.

Holder scored 18 for Arizona State and was a perfect 4-for-4 at the line. He said that something critical an ASU fan said to him earlier in the game served as motivation for his final two shots.

Holder wouldn’t say what the fan had told him “but I wish he did it in a more professional manner.”

USC: It was an awful loss for the struggling Trojans, who looked to have finally snapped out of their recent funk. Since opening the season 14-0, USC is 7-8.

Arizona State: These late heroics are getting to be a habit for coach Bobby Hurley’s team. They did much the same in a victory over Stanford.

Arizona State: The Sun Devils are home against Arizona Saturday in their final regular season game of the season.