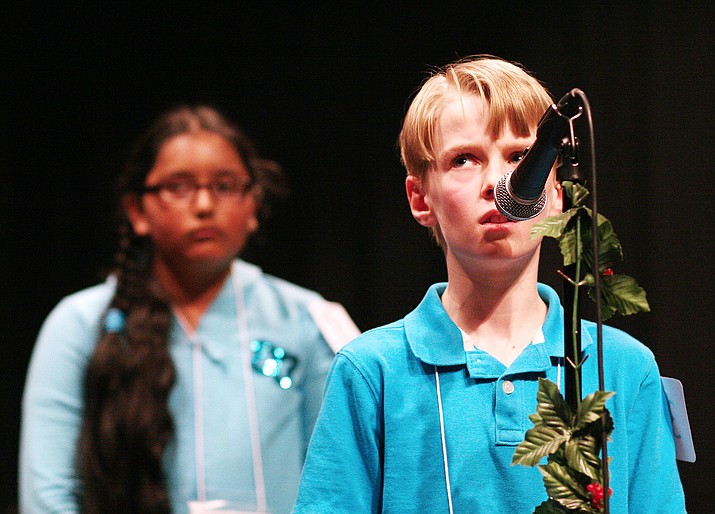 For the third consecutive year, Prescott Valley’s Tanner Dodt looks to finish first in the Yavapai County Spelling Bee. Tanner is pictured in 2015, when he won his first county spelling bee by correctly spelling the word precipice.

Is it possible that Tanner, now 12, could win the county’s spelling bee a third consecutive time?

Whichever child wins the county’s 71st annual spelling bee will then move on to this year’s Arizona State Spelling Bee with a chance not only to win – but to then represent Arizona at the 89th annual Scripps Howard National Spelling Bee in Washington, D.C.

Should Tanner – or any Arizona child – win the national competition this year, that speller would become just the state’s second National Spelling Bee winner.

Times have changed since the nation’s first official spelling bee, back in 1925.

Back in ’25, the Louisville Courier-Journal conducted a statewide spelling challenge for Kentucky’s grade school-aged children. Its main objective was to help children improve both their vocabularies and their spelling.

In the beginning, it was customary to claim two winners – one boy and one girl.

Due to World War II, the National Spelling Bee was suspended from 1943-45.

It didn’t take too long – historically speaking – for the spelling bees to become something big to a whole lot of people.

On Friday, Feb. 24 at 12:30 p.m., students from the county’s public districts, charter schools and private schools, as well as students who are home school, will look to become a part of history at Camp Verde Unified School District’s Phillip England Center for the Performing Arts.