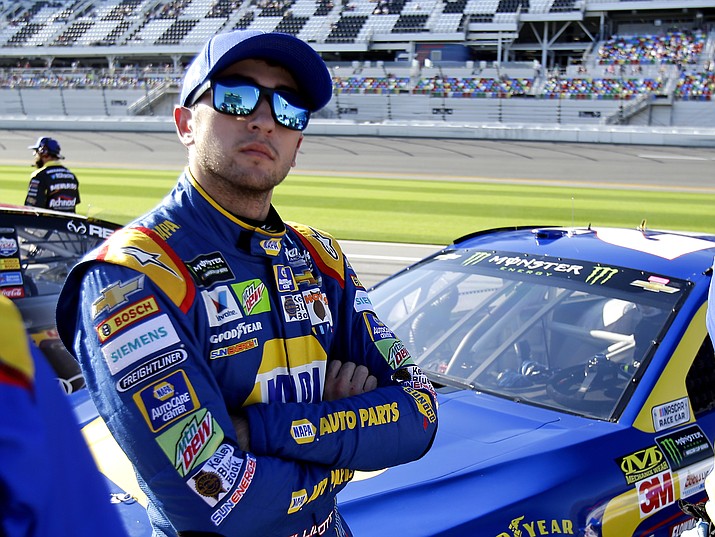 Chase Elliott looks at the leader board after a qualifying run for the NASCAR Daytona 500 auto race at Daytona International Speedway, Sunday, Feb. 19, 2017, in Daytona Beach, Fla.

DAYTONA BEACH, Fla.— It’s impossible to tell the history of NASCAR without mentioning Elliott and Earnhardt.

As the series shifts into a new era, those distinguished names are out front again and will give the start of the Daytona 500 a throwback feel.

Chase Elliott and Dale Earnhardt Jr. — teammates and sons of Hall of Fame drivers — will start 1-2 and should give a sagging series a sorely needed boost this week headed into its marquee event.

Elliott nipped Earnhardt on the final qualifying lap Sunday to win his second straight pole for the Daytona 500. Elliott turned a lap at 192.872 mph to just edge Earnhardt’s speed of 192.864 and become the first repeat pole winner in 27 years.

“I don’t really care who it is. I’m not going to feel bad about beating somebody,” Elliott said. “Dale’s a good guy. I’m happy to share the front row with him. Happier to beat him.”

Earnhardt, long NASCAR’s most popular driver, had the speed to beat in his triumphant return after missing the second half of last season with a concussion. He missed the final 18 races with nausea, vision and balance issues after at least the fifth concussion of his career following a June wreck. He was as sharp as ever in the No. 88 Chevrolet headed into his first race since last July.

Elliott and Earnhardt gave Hendrick Motorsports and Chevrolet a 1-2 front row for the fifth time in the Daytona 500.

Elliott, the 21-year-old son of Hall of Fame driver and two-time Daytona 500 champion Bill Elliott, became the youngest Daytona 500 pole winner a year ago and proved in the No. 24 Chevy starting first last season was no fluke.

Elliott also made it three straight years for the No. 24 on the pole. Jeff Gordon won the pole in 2015 in his final season before he retired and turned the car over to Elliott.

The rest of the field will be set Thursday in the two qualifying races. Elliott will lead the field to green and try and avoid the problems that spoiled his Daytona 500 debut.

Elliott’s run at a Daytona 500 victory last season ended in the grass just 19 laps into the race.

The front end of his car lifted off the ground, and the rough ride caused enough damage that his car had to be towed to the garage.

Until the wreck, Elliott was the star of Speedweeks. He followed the pole with a win in the second-tier Xfinity Series race.

He’s back out front again and expecting a better finish.

“I hope we can just try to get to the end of the 500, next,” Elliott said. “We’ve obviously got to get through the Duels, first. But, just making it to the end and having yourself in position, obviously we’d love to have a shot to win this thing. It would be great and I think we have a car that can do it.”

“My boss man is happy,” Earnhardt said. “I just talked to him on the phone, and he’s got to be thrilled with having his cars up front.”

The 42-year-old Earnhardt got married in the offseason, wants a family and said over the weekend that he would a like a “couple of months” to see how he feels before deciding to sign a contract extension.

Earnhardt starts second in the first NASCAR race under the Monster Energy sponsorship banner and the Daytona 500 is the first under the new format that divides the race into segments.

After 42 drivers had a scheduled turn, the 12 fastest advanced to the second round. The two fastest drivers in the second round set the front row. There were 36 drivers guaranteed a spot because of the charter system.

Other things to know about qualifying:

WHO’S IN: Beard Motorsports driver Brendan Gaughan and Tommy Baldwin Racing’s Elliott Sadler secured spots in the Daytona 500 as the two fastest drivers from teams not locked into the 40-car field.

WALTRIP FINALE: Michael Waltrip failed to advance to the second round of qualifying in his 30th and final Daytona 500. He said the race will be his last in NASCAR. Waltrip, a two-time Daytona 500 winner, will drive the No. 15 Toyota for Premium Motorsports. Premium bought a team charter from the defunct HScott Motorsports, guaranteeing the 51-year-old Waltrip a spot on the grid.

SUAREZ STRUGGLE: Daniel Suarez also did not advance to the second round in his first career Cup event. Suarez, the only non-American in the Monster Energy Cup Series, has become a sensation in his native Mexico. He became NASCAR’s first foreign-born series champion with an Xfinity Series title last season and Joe Gibbs Racing promoted him to the No. 19 Toyota when Carl Edwards abruptly retired.