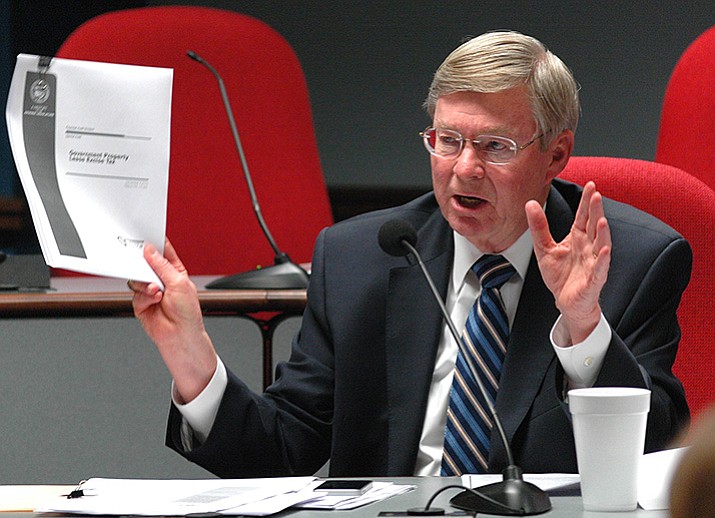 Rep. Vince Leach, R-Tucson, who is carrying the legislation that was largely crafted by the Arizona Chamber of Commerce and Industry.

PHOENIX – Spurred by business interests in the wake a voter-approved minimum wage hike, Republican lawmakers approved legislation Thursday, Feb. 16, that could kill the ability of citizens to create their own laws.

The most significant provision of HB 2404 would effectively kill the ability of groups to use paid circulators by prohibiting payment by the number of signatures gathered.

Paid circulators would still be allowed – but only if compensated on an hourly or other basis. But that removes any incentive for circulators to gather as many signatures as possible.

“It reforms the incentive for fraud and forgery,” said Rep. Vince Leach, R-Tucson, who is carrying the legislation that was largely crafted by the Arizona Chamber of Commerce and Industry.

That’s not all that is in the measure approved by the House Government Committee on a party-line vote and sent to the full House.

The proposal imposes a series of new procedural hurdles and gives those who oppose initiatives new rights to try to have them knocked off the ballot before voters get a chance to weigh in. It also requires strict compliance with all initiative requirements, something Sierra Club lobbyist Sandy Bahr said could result in disqualifying petitions simply because their margins are not the right size.

And it would require any initiative committee that uses paid circulators to purchase a bond of up to $50,000. Leach, however, did not explain what damages that is designed to cover.

Rep. Ken Clark, D-Phoenix, questioned what happens if companies choose not to write bonds for these unspecified damages.

When Leach did not respond, Rep. Doug Coleman, R-Apache Junction, said there’s a simple answer to all of this: use volunteers. But a series of people who have been involved in the initiative process in the past three decades all testified that is not realistic.

It takes 150,642 valid signatures to put a change in state law on a ballot, a figure based on 10 percent of the people who voted in the last gubernatorial election. But it realistically takes more than 200,000 names given how many are disqualified through the screening process.

Constitutional changes carry an even higher burden of 225,963 valid signatures.

“This bill is killing the initiative process by small cuts,” said Doris Provine, president of the Arizona Advocacy Network. She called the changes “onerous.”

“We can’t do initiatives with volunteer signature gatherers,” Provine said.

Rivko Knox of the League of Women Voters pointed out HB 2404 is one of a series of measures at the Republican-controlled legislature designed to impose new hurdles on those who want to propose their own laws, “leading many to believe that its goal is, in essence, to make it impossible for initiatives to be a viable method of creating legislation.”

The supporters of the legislation who testified were those who unsuccessfully attempted to get voters to kill Proposition 206, which hikes the state minimum wage.

That includes the Arizona Restaurant Association whose chief operating officer Dan Bogert testified in favor of the restrictions, particularly on the use of paid circulators. He called them “professional compensated advocates.”

But Scott Cargill of Humane Voters of Arizona pointed out that those who say paid circulators lead to fraud are not proposing to limit the ability of political candidates, including legislators, to hire and pay people by the signature to gather names on their nominating petitions.

Leach said it’s not the same thing, saying lawmakers can be turned out of office every two years. Cargill sniffed at that distinction.

“I haven’t heard a reason as to why a fraudulent signature for a candidate should be remedied by the fact that the candidate is voted out of office in a couple of years,” he said.

Former state Rep. Theresa Ulmer pointed out that many of the people signed in supporting the legislation are members of the state chamber.

“A lot of these folks are dark money folks,” she said, referring to efforts by that group to block legislation which would require groups who run so-called independent expenditure campaigns for and against candidates to disclose the source of their cash. Ulmer, who represented the Yuma area, also chided lawmakers for pushing to curb the ability of citizens to propose their own laws under what they claim is a desire to ensure the process is fair.

“If you’re going to erode the constitution, don’t stand up and talk about integrity,” she said.

Joanne Mizell, a volunteer with the Humane Society of the United States, told lawmakers it’s not like those who craft initiatives are purposely looking to sidestep the legislative process.

She said putting something on the ballot is both expensive and time-consuming. Mizell said they went the ballot route only after lawmakers ignored their requests.

The result, she said, are voter-approved laws banning the use of leghold traps, outlawing cockfighting and prohibiting the use of tiny “gestation pens” by farmers raising pigs.

Clark had his own take on what he sees as selective vision about what constitutes fraud and what measures lawmakers should take to prevent it, asking Bogert whether the Restaurant Association supports eliminating the ability of lawmakers to take gifts from lobbyists.