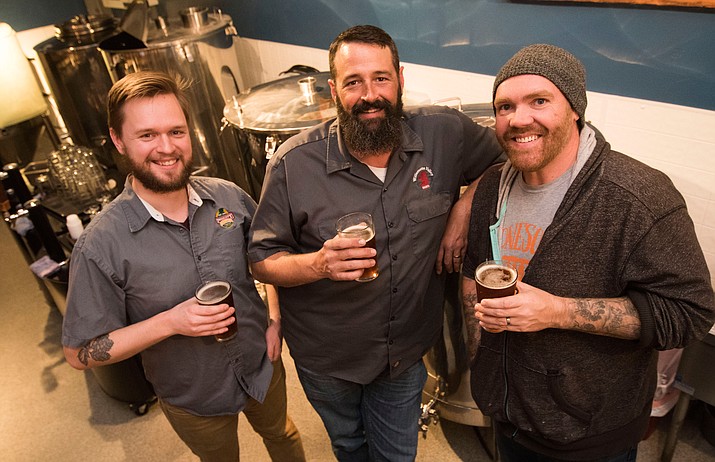 “When we first came to Prescott in 1993, nobody here had ever even heard of a brewpub,” Nielsen said.

Early craft beer brands, such as Sierra Nevada, Samuel Adams and New Belgium, were nowhere to be found. Instead, mainstream beer brands like Budweiser, Miller, Michelob and Coors dominated the market.

So when the Nielsens opened up Prescott Brewing Company in 1994 and served only their local brew, consumers were wary.

This “weird” beer came in the form of a cream ale, an amber red ale, a pale ale and an Indian pale ale (IPA).

These are considered mild when compared to today’s standards.

Craft brewers are now throwing just about anything they can get their hands on into their brews, including hints of chocolate, coffee, various fruits and even vegetables like cucumber and tomato.

Perhaps surprising to some, these unusual beers have become tremendously popular throughout the United States.

In fact, craft beer has practically gone from underground to mainstream.

This is primarily because of a broad shift in consumer buying habits, said Scott Kirkpatrick, director of Brands Management for Hensley Beverage Company, a major beer distributor in Arizona.

“I think selection and choice is prominent in the ways consumers are buying music, or books, or food,” he said. “So the notion that three or four beer brands fits all is just not really adequate with today’s consumer.”

Additionally, when Prescott Brewing Company opened, they were the sixth brewer registered in the state. There are now 139, according to the Brewers Association.

This has caused major beer producers to scramble for a foothold in the emerging market by buying up small craft breweries.

“They’re defending their territory at this point,” Nielsen said. “I don’t think they ever thought that craft would take over the way it did.”

This ownership alone eliminates such breweries from being considered craft any longer, according to the Brewers Association — the recognized authority on such matters.

To qualify as an American craft brewer, the business must be small, independent and traditional:

Independent:  Less than 25 percent of the craft brewery is owned or controlled (or equivalent economic interest) by an alcoholic beverage industry member that itself is not a craft brewer.

Traditional:  A brewer that has a majority of its total beverage alcohol whose flavor derives from traditional or innovative brewing ingredients and their fermentation.  Flavored malt beverages (FMBs) are not considered beers.

Nielson believes the explosive growth of craft beer will likely slow in coming years as it normalizes and markets saturate.

What the country is converting to as a whole, Kirkpatrick said, is a time before mass production. “Beer is more normal in its current state with the American craft industry than it was in the years between prohibition and 1996,” he said.

For the majority of beer history, it was difficult to transport beer because refrigeration was either not invented yet or in a very primitive state.

“It was more common for a longer period of time to have beer be local, close to you and made with local ingredients, than it was for macro beer to dominate a total country’s market,” Kirkpatrick said.

It’s becoming questionable as to how many beers can successfully be in stores and be distributed through distributors, Kirkpatrick said.

“But as for the amount of breweries that can exist as brewpubs and restaurants and neighborhood places, I think that number can continue to grow,” he said.

All are in the midst of recognizing AZ Beer Week, a 10-day celebration started in 2010 by the Arizona Craft Brewers Guild.