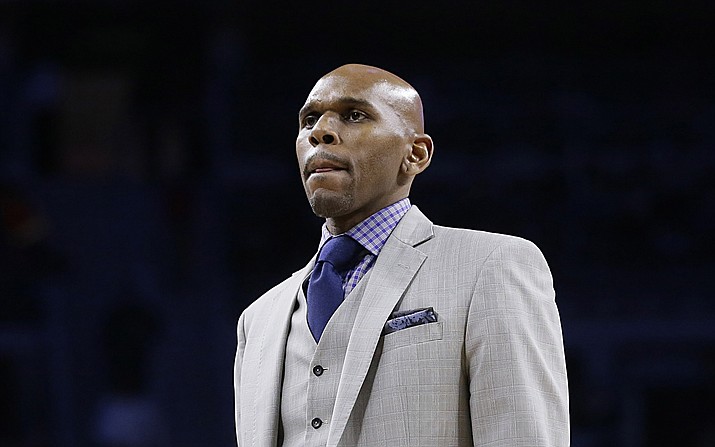 Jerry Stackhouse of Raptors 905 will be a coach in next Saturday’s NBA Development League All-Star Game in New Orleans. Coby Karl of the Los Angeles D-Fenders will join him. (Carolos Osorio/Associated Press, File)

Jerry Stackhouse played in two NBA All-Star games, and some of his work from two appearances in the league’s dunk contest remains popular YouTube fodder. Coby Karl has been to a few All-Star weekends has well, a perk of having his father coaching the game.

Next weekend, they’ll get a different perspective.

But soon, they’ll see it from the NBA D-League perspective.

Stackhouse and Coby Karl are the coaches for next Saturday’s NBA D-League All-Star Game. Both are in their first seasons as D-League head coaches, Stackhouse with Toronto’s Raptors 905 and Karl with the Lakers’ Los Angeles D-Fenders. They share a vision — unlike the minimal-defense game that is coming next Sunday night, the D-League contest is a chance for players to show why they belong.

“That’s who we are,” Stackhouse said. “Coby, he has the background as a player who played in the NBA and a real background in this D-League. He takes it seriously. I take it seriously. Defense, share the ball, do the right things. We’re going to reiterate to the guys that for them, this isn’t about having a highlight weekend. Show people that you compete.”

The D-League All-Star matchup last year had 26 free throws, the NBA one had seven. The D-League game wasn’t exactly a grind-it-out matchup, but there was a competitive feel — with 24 players looking for jobs at the next level.

Stackhouse and Karl want next Saturday to be the same.

“Obviously, our objective is different than just having an All-Star Game,” Karl said. “It’s a great honor for me and it’s a great reward for the players and it’s a great opportunity as well for those players to be seen in front of NBA personnel.”

It’s going to be quite the stage for the D-Leaguers, literally and figuratively.

Last year’s D-League All-Star matchup was held in a minor-league hockey arena in Toronto, a small building located a few miles from the Air Canada Centre that the Raptors call home.

This year’s D-League game is going to be at the Superdome — being transformed into a 10,000-seat basketball arena for the day.

Even downsized, the Superdome will open some eyes.

So has the level of play in the D-League, at least for Stackhouse.

“I’ve had so many things that I’ve been doing, even after I finished playing, whether it was broadcasting or whatever, it was still talking about the NBA and not the Development League,” Stackhouse said. “It’s a hidden gem, man. Being able to see the talent there, the guys who are getting called up, it’s fun to see.”

Stackhouse still plays some, too: In every Raptors 905 practice, he runs a drill where the coaches get involved against players.

“I take all the shots,” Stackhouse said. “I’m looking for the ball to get around to me so I can be Jerry Stackhouse for at least five or 10 minutes each day. The guys get a kick out of it.”

Both Stackhouse and Karl are finding that name recognition helps, too. Stackhouse had a long NBA career; Karl is the son of longtime NBA coach George Karl, and also had NBA playing stints with Golden State, Cleveland the Lakers.

They’ve both been where D-League guys want to go.

“The analogy I use is it’s like training a puppy,” Stackhouse said. “The first thing you have to do is get them to look at you. If you can get them to look at you, then you can teach them. They look at me because they want it and they know that I’ve done it, so that’s one hurdle that I don’t have to deal with. They have their eyes and their ears open.”

Karl is finding the same to be true.

“It’s truly a dream for me come true, just to be a head coach, period, in America at the professional level,” Karl said. “And the success we’ve had as a team has added to that. Now the next thing for me is to get these guys NBA call-ups and get rewarded for doing things the right way.”