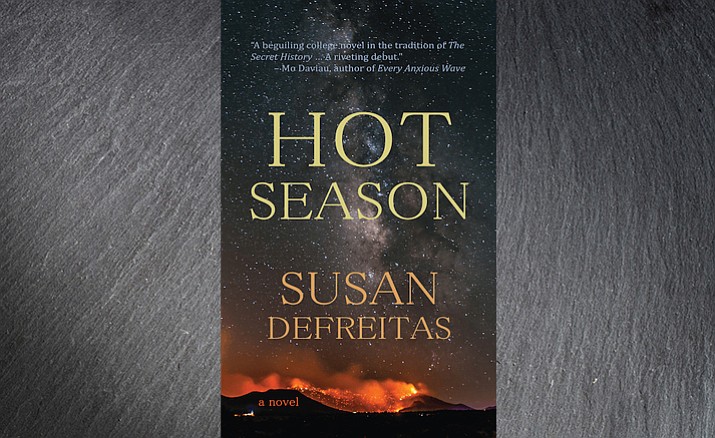 When I moved to Prescott in the summer of 2002, life here was just a little bit stranger. OK, so I may have been a little younger then, too — that could, I suppose, have something to do with it. But during the summers there were circus performers practicing on the lawn of the square, a Harvard Square Editions last November, I was thrilled to find a juggler on page one. But her novel quickly moves from circus arts to the risky territory of eco-activism, centered, in her book, around The Black Cat — a hub for activism closely resembling Prescott’s old Catalyst Infoshop, located across the dirt lot from Roasters, and where an FBI raid occurred in December of 2005, resulting in the arrest of one of the owners on charges of eco-terrorism, and his subsequent suicide in jail.

A true Prescott novel, “Hot Season” asks big questions — not only about water rights and the importance of riparian corridors in the West, but about what it means to fight for the natural world. Young and idealistic, the three protagonists, Katie, Jenna and Rell, attend Deep Canyon College (whose real life inspiration was our own Prescott College). These three roommates negotiate love and the lure of monkey-wrenching in the time of rumored undercover agents in the classroom. And heat — did I mention the heat? For much of the novel it is summer, the air scorched, the heat palpable.

Beautifully written, “Hot Season” sizzles with nuanced friendships, passion, and the search for identity, so malleable during the college years. As DeFreitas eloquently puts it, “All these selves were turning into other selves, burning off in the heat of this strange summer.”

Debut novel by Prescott College grad will appeal to many
Off the Shelf: "Further Out Than You Thought," by Michaela Carter
Peregrine Book Co. founder will be stocking her own novel
Did anyone notice just how hot it is?
Former Prescott resident writes about Prescott, Old West in new novel
Event Calendar