Cat gets a pair of bionic legs in Bulgaria 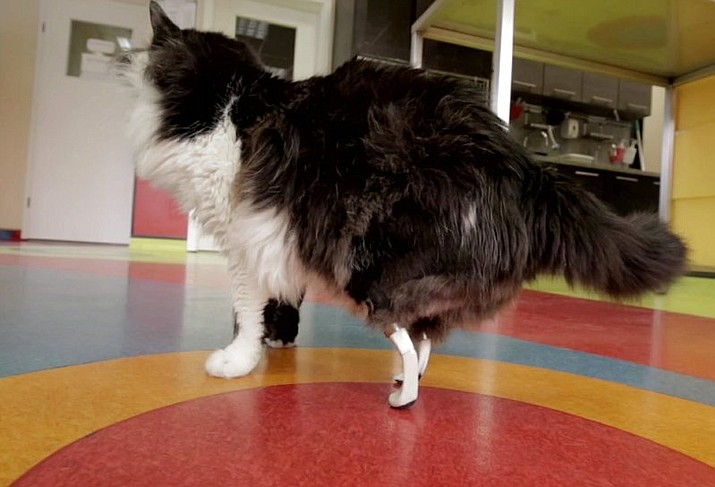 Pooh, a stray cat who lost his back legs in an accident, walks on his hind bionic paws in Bulgaria.

Pooh, who was probably hit by a train, now has a chance for independence that the traditional solution - a set of wheels - would never have offered.

SOFIA, Bulgaria (AP) — A cat named Pooh has been given a new lease of life in Bulgaria, becoming the country's first "bionic cat" with a pair of prosthetic hind legs.

Veterinary surgeon Vladislav Zlatinov carried out the operation that in Europe has only previously been done in Britain. He was aiming to give the fluffy, black-and-white cat who was probably hit by a train a chance at the sort of independence that the traditional solution — a set of wheels — would never have offered.

Zlatinov relied on a few publications in scientific journals. With no commercial implants available, the parts had to be custom-built.

At the end of the complex surgery, Pooh had a pair of titanium legs implanted into his body. They are connected to external prostheses that can be changed like shoes.

Pooh had to recover for six weeks before he could test out his new limbs. Now, he is getting used to them, Zlatinov said, adding that Pooh notices the prostheses and tries to keep them clean.

Since the surgery on Pooh, Zlatinov has operated on three more cats, and more are on the waiting list.

Cat gets a pair of bionic legs