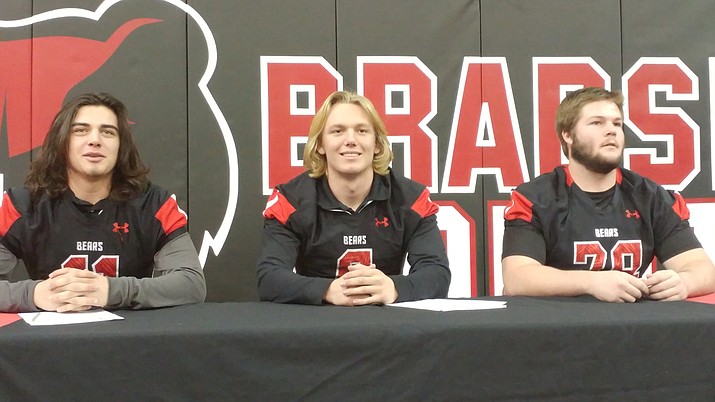 About half of Bradshaw’s varsity football team, members of the varsity basketball team, and the players’ family and friends attended a brief ceremony.

Bundrick, Morales and Rushton were cornerstones for the 2016 Bears’ Class 4A state playoff-qualifying team, which lost in the first round and finished with an 8-3 overall record.

The 6-foot-4, 210-pound Bundrick, who’s also a standout catcher on Bradshaw’s baseball team, said he wants to impress at the junior-college level in hopes of receiving an offer to play for an NCAA Division I program. He added that Mesa C.C. has sent its past six QBs to NCAA D-I schools.

“I had other offers – [NCAA] Division II, NAIA schools, and low [NCAA] Division I’s,” added Bundrick, who will have a chance to start in Mesa’s spread offense. “But my dream is to play high-level Division I football, and I think I can. If I go to a school like Mesa, they can promote me a little. It’s all on me.”

Bradshaw coach David Moran added that the dedicated Bundrick, who passed for 2,000 yards and led the Bears in rushing in 2016, will make it to the next level.

“[NCAA] Division I schools are missing the boat with Gunner,” Moran said. “He’s got great potential. He’s a good-size kid. He’s athletic. He’s got good speed and a strong arm. Hopefully here in a year or two, he’ll go D-I. I guarantee he will.”

Morales, whom Bundrick encouraged to play football for the first time this past fall, quickly transformed himself into a leader for the Bears’ “Black Plague” defense in 2016.

“He’s been talking to Missouri Valley for about a year now, and it’s a good fit for him,” said Moran, praising Bradshaw baseball coach Brian Bundrick for encouraging Morales to play football. “His football years are ahead of him. He’s got good potential. He’s got one year of football under his belt, so the next three or four years of college, he’s going to learn the game even more.”

Bundrick’s best friend, Morales will likely redshirt this year at NAIA Division I Missouri Valley, which will pay $12,000 per year of his education on an athletic scholarship. The 6-foot, 208-pound Morales has been a baseball infielder for years.

“Between me and our family talking, they’re the best fit for me at this point,” Morales said of Missouri Valley, where he should remain a linebacker. “It’s the sport I love. I’m hoping to get my degree, first off [in business management].”

“Kobey put in the time and the work in the off-season, and not just in football and in the weight room, but with his academics,” Moran said. “He took care of business there. And he’s a great leader, a great ‘high-character’ guy. We’ve got a bunch of good kids behind him that are juniors and sophomores that will follow his lead.”

Rushton didn’t make his final decision to attend the School of Mines until Monday night. He called Moran shortly after School of Mines coach Zach Tinker gave him an offer.

“The recruiting coordinator came to my house back in December, and talked to me then,” Rushton said. “We talked on and off [since].”

The 6-1, 279-pound Rushton, who might redshirt, said it’s been a dream of his to play for S.D. School of Mines. With that in mind, Moran encouraged Rushton to sign.

“That’s been a top school of mine since the eighth grade,” added Rushton, who will major in engineering. “It’s one that I’ve always looked at, because it’s one of the best engineering schools in the country, and also a great [football] program there.”

For 2017, Bradshaw Mountain’s football team begins spring football practice on April 24, Moran said. He added that 70 players have been working out since the 2016 season ended in November.