Enough leaks: PV sues because of library defects
PV has tried for years to fix its leaky problem 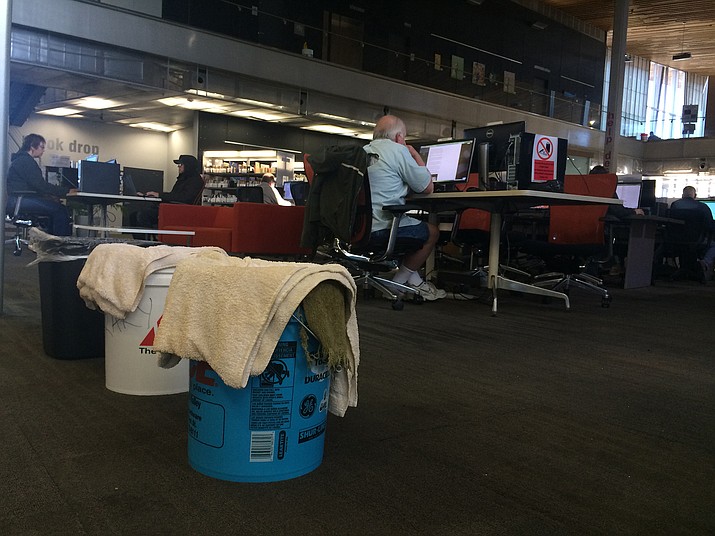 After a series of storms last week, the Prescott Valley Public Library had to put out buckets to catch the water leaking from the roof. The town filed a lawsuit this week to try to get the leaks repaired.

The Town of Prescott Valley filed a lawsuit seeking damages against the architect and construction contractor for the joint facility that houses the library, auditorium, public meeting room and classrooms and offices leased by Northern Arizona University on Tuesday, Jan. 30, according to a news release from Prescott Valley Communications Relations Coordinator Heidi Dahms Foster.

“The suit alleges defects in the design and construction of the roof assembly, exterior cement panels, and various other interior and exterior portions of the facility,” the release states. “The suit is the culmination of a two-year effort to find the cause for and fix such things as chronic storm water leaks and cracking and fading of the exterior panels.”

The Prescott Valley Town Council approved a contract with Richard + Bauer to create an architect master plan for a new library facility for Prescott Valley on Thursday, Nov. 17, 2005, and space was later set aside for Yavapai College to have classrooms and offices in the same facility, a provision based on an intergovernmental agreement. Later, on Thursday, Dec. 13, 2007, the council entered into a construction contract with Barton Malow Company and the building was occupied in 2009 with the college leasing its portion to Northern Arizona University in 2010.

After occupancy, leaks in the roof assembly and rapidly wreathing exterior cement panels were discovered and mold was later discovered due to water leakage. Inspections and investigations were conducted beginning 2014.

“As the potential cost of needed remediation increased, the ability of the parties to resolve the defects cooperatively diminished,” the release states. “In an effort to resolve the discrepancies, the Town engaged its own third-party consultants.”

A 2016 report by Gervasio & Associates found defects in the integrity and performance of the facility due to deficient design and construction, with the roof assembly likely needing to be replaced entirely. Further reports by Trinity/ERD found that the exterior cement panel design and installation was inadequate for local wind loads and other conditions and needed to be replaced with different material.

The remediation of the joint facility roof assembly is long overdue, said Town Manager Larry Tarkowski in the release.

“We’ve frankly spent too much time trying to negotiate a solution with parties that insist on arguing with each other about who is to blame. With the filing of this legal action, we expect both parties to now come forward with the resources and solutions needed,” he said. “If they don’t, we will be making the fixes ourselves in the near term and then seek just recompense through the legal system.”