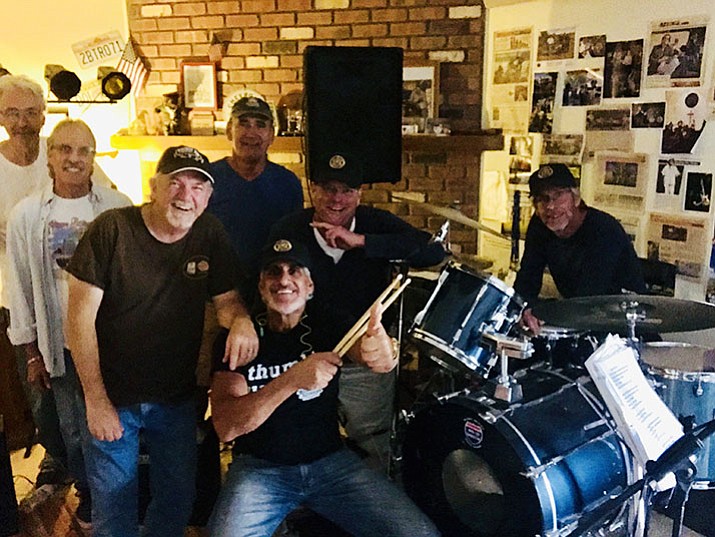 An updated photo of Road One South, during a rehearsal for Acker Night.

It all started in 2007 when Chris Russo said he posted in Pops Music Store that he was looking for a band and got a call from Dwight D’Evelyn.

They had a conversation about the kinds of music they like and he told D’Evelyn he’d hate everything he likes, Russo said.

“Typically with the blues style it’s a common occurrence, at least in an area like this where classic rock is really prevalent. At any rate, I got together with Dwight, gave him a DVD full of MP3s with 50 songs and told him ‘Let me know if you like any of these,’” he said. “He said he liked all of them. I knew we were in trouble.”

Road One South developed out of that, Russo said. Originally, he figured to get a year or two out of the band and hopefully it would be a jumping off point to meet other musicians, he said. Since then, they’ve been one of the area’s most popular bands, performing at multiple venues including the Elks Theatre and Performing Arts Center for the Acker Musical Showcase for the past six years.

In the hours before Acker Night began on Friday, Dec. 8, D’Evelyn said it was their final year performing at the event and their last major performance. Though they’d be doing some small gigs throughout 2018, Acker Night was their swan song.

Currently, the band consists of Russo on guitar and vocals, D’Evelyn (drums), Gary VanSlyke (bass), Jay Schermer (harmonica), Ofer Harel (percussion) and John Wurtz (guitar and vocals). Wurtz is also the band’s songwriter. Yet, they weren’t the only people to have been in Road One South, with D’Evelyn stating that there were others who were instrumental Road One South members in the past. Those include Ron Green (bass), Ed Flaherty (guitar), David Girardin (bass) and Greg “Notes” Gordon (harmonica). Gordon returned for this year’s Acker night.

D’Evelyn said when he moved to Arizona, he figured he wouldn’t have the musical opportunities he had in California. It turns out he did.

“Some of these musicians I play with are just top notch and I feel honored to be around them,” D’Evelyn said. “To have 10 years with these guys has been pretty amazing.”

Gordon said he had the same apprehension when he moved from Florida. He recalled the invitation to sit in Road One South in a coffeehouse in Prescott Valley. In the moment, he dug the grooves D’Evelyn was laying down and locked in on a guitar with Wurtz and Russo, knowing right then and there he fit in.

Russo also said he doubts they played any of the covers the same way twice. They played from wherever the inspiration was coming from. “That inspiration to create is always there and this band does it really well on stage,” Russo said. “For me, that’s what keeps it interesting.”

Every member has their most memorable performance.

For Russo, it was performing at the Flagstaff Blues Festival, calling it the kind of stuff you want to do all the time.

Wurtz recalled the 2016 Acker Night – where they had the choir perform, hiding them behind the scenes until all of a sudden they started singing to produce a huge sound.

Having joined two years ago, Schermer said his highlights have been the two Acker Nights and the two courthouse gigs in July he’s played with the band.

Wurtz wrote a song called “19 Angels” attributed to the Granite Mountain Hotshots, D’Evelyn said. It was a culmination of a lot of emotion. “That has just resounded as something so special that it’s hard to top,” D’Evelyn said.

The Acker performances, along with being able to mentor kids and talk to them about their experiences playing music semi-professionally have been great too, he said.

Gordon said he has a series of highlights, from the thrill of having the song Wurtz wrote be broadcast over KPPV radio, and the first concert where the band released its CD and sold out the entire first pressing in one show … to the Fourth of July show in Chino Valley where Russo laid into a guitar solo of “All Along The Watchtower” where it felt like Russo was possessed by Hendrix himself.

The chief moments for him though are the television appearances, fundraising for Acker and the attendance at the Elks, and the one time he played the “Star Spangled Banner” through a vintage 1969 Fender amplifier in front of 10,000 people for the City of Prescott.

“Somehow or another, they said ‘Can you do that again? At the very end of the night, I just dialed the thing up, swimming in reverb, and played it from wherever the deepest inspiration of my soul stirs,” Gordon said. “Right when I hit that note, ‘and the rockets’ red glare,’ I just knew to hold it and they launched the first firework as it streaked across the sky.”

Playing with Road One South every night is special, whether it’s playing for one or two people or for thousands, D’Evelyn said. It doesn’t matter, it’s all good to him.

Ending up at the Elks Theatre for Acker Night six years ago was a total surprise, D’Evelyn said. They were honored and two years later, were inviting the students to be involved, he said. After all, the Acker scholarships are for the kids, so bringing them up on stage and having them involved made sense.

For every musician who’s become a household name, there was always someone who preceded them and had their finger on the taproot of inspiration, Gordon said.

“For us to be able to exemplify and model that aural tradition through music, through blues music especially, and not only create scholarship for development, but to do it and model for them good conduct, good musicianship, good performance standards and a swinging inspirational exhibition of talent is really the fulfilling factor in this,” he said. “Anybody can learn to play music, that’s the technical portion of it, but you can learn to express what’s really going on inside you through your instrument in a way that creates harmony. That’s where Road One South has really done a magnificent job.”

Russo, D’Evelyn, Wurtz, Schermer and Harel embody to the kids by example that what they do is something done from the soul, Gordon said.

Playing Acker was selfless work, but the band loved it because of the donations and watching the kids perform, D’Evelyn said. This year, 3,200 people came through and Road One South raised $2,200 Schermer said, adding that they broke records.

Though they haven’t mapped out what they’re going to do for 2018, the band has talked about the possibility of recording some of the material they’ve done over the years, especially the original material, in a professional studio, D’Evelyn said.

There are a couple steady gigs, like playing at Granite Creek Vineyards twice a year and some private events, but as far as ongoing gigs at the local watering holes, Road One South is beyond that and it is time to move on, he said. Individual members do get calls to play with other bands individually and they keep busy in that realm too though.

“It’s just, in my mind, a sort of semi-retirement but the intensity that we’ve had over the years is slowing down … we’re going to miss it horribly,” he said, adding that someone came up after this year’s Acker “and said ‘if you don’t do this again next year or I hear about the fact you’re not going to do it, I’m going to get a petition circulated,’ which is an honor to hear.”

As musicians, they still have the desire to play and have to let the music out, Schermer said. Echoing that sentiment, Gordon mentioned a biblical reference that he uses as one of his personal inspirations. The passage in question, from Jeremiah 20:9, says God’s word is in the writer’s heart like a fire shut up in his bones. If you’ve been blessed with the voice of music, it’s incumbent upon you to let the world hear it, he said.

Gordon said he’s had 35 years of musicianship, 25 of which have been spent as a performing musician in public.

“I couldn’t have asked for a richer experience with people whom I have the highest regard and deepest respect,” he said.

Road One South - Jam at Joe's by Road1South

Road One South jams at Whiskey Off-Road
Local favorite Road One South keeps returning to the stage, this time for Blues Festival
Road 1 South at Elks on Friday night, with Acker 'guests'
Road One South to appear on 'Morning Scramble'
Give the people what they want! Road 1 South has been busy making tracks
Event Calendar