Survey ranks Prescott Valley 12th, Prescott 14th safest cities in Arizona
But how much validity do these surveys really have? 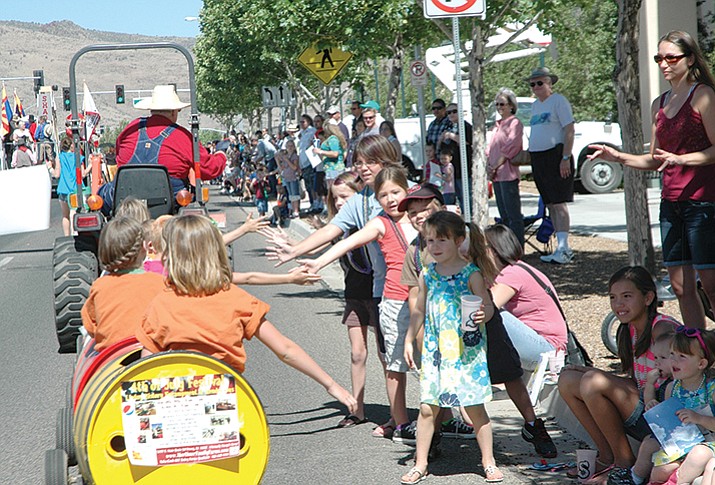 Prescott Valley residents enjoying one of the many parades to bring community to the valley. (Tribune file photo)

Prescott Valley is the 12th safest city in Arizona, and Prescott is 14th, according to data collected by Safe Home, a security systems sales company.

Safe Home bills itself as “an organization dedicated to helping people create safer living environments for their families,” according to its website, SafeHome.org.

The survey, which looks at cities of 38,000 or more in population, used several criteria to develop the ranking, including FBI crime data, population information, and a formula that looks at the occurrence of crime per 100,000 population. Also considered are the officer-to-citizen ratio, violence and property crime trends, and demographics.

“Despite the high heat,” the survey said, “Arizona contains 10 of the 500 safest cities of the United States to live in.”

Prescott Valley Police Sgt. Jason Kaufman said, “I grew up in New York on Long Island, where there was lots of people, traffic, and crime. This is a great place to live, work, and raise a family.”

The survey’s statistics, from 2015, show violent crime in Prescott declined during the survey period, while it grew in Prescott Valley, but their “safety scores,” as calculated by Safe Home, are very similar: Prescott is at 77.91 and PV’s is 77.99. The rankings can be explained by the higher number of officers-to-citizens in PV as compared to Prescott.

Safe Home ranked Greenwich, Connecticut, the safest city in the U.S., with a safety score of 92.71. Crime is trending downward there; violent crime is down 39.1 percent and property crime is down 14.4 percent.

Arizona’s sole city to make the Top 101 Safety Cities list was Gilbert, at No. 87.

A similar survey, published a year ago, and using the same 2015 FBI data, came to different conclusions about Prescott and Prescott Valley.

Another survey, released this month by the website WalletHub.com, and including data on threats other than crime, such as the risk of natural disasters, ranked Gilbert at No. 5 on its list of 182 cities.

None of the Quad Cities appear on the WalletHub list, which, the website said, “compared 182 cities — including the 150 most populated U.S. cities.”

How accurate are these surveys, anyway?

One expert on the crime and FBI data said he doesn’t believe these surveys are accurate.

“I do not think that any of the rating systems deserve significant credibility,” said Dr. Richard Bloom, director of Terrorism, Intelligence, and Security Studies at Embry-Riddle Aeronautical University.

“There are issues with trying to interpret whether a particular location is more or less safe,” he added.

Among his rationale for this argument:

• The data needed to make a judgment like what city is safest is partially incomplete, he said.

• The information is not representative of the whole population. “There are inevitable biases in the information collected, so certain kind of behaviors and certain kinds of people are oversampled,” while others are underrepresented, Blooms said.

• The weighting system used for variables is different for every survey, and not necessarily valid. “In my opinion, there’s no reason or rationale for why the weighting occurs,” he said.

• It’s not really true that past data can predict future behavior; a city with low crime in the survey could just as easily be higher the next year.

The best reason to look at these kinds of surveys, Bloom said, is for enjoyment.

“Certainly, the information is interesting,” he said, but “there are some really serious problems with taking these approaches seriously.”