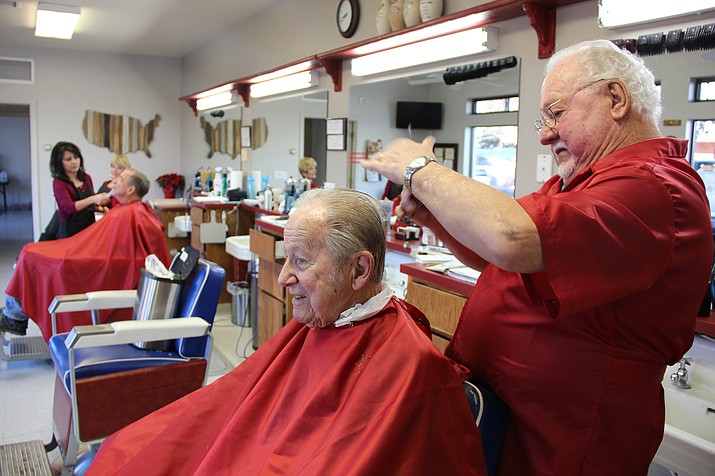 Roger Gibson (right) cutting a customer’s hair on his last day in the business on Friday, Dec. 22. As of this week, Gibson has officially handed over his business, Roger’s Modern Barbershop, to Angela Maldonado (cutting hair in the background), so he may retire at the age of 75.

“It’s time to get out and spend time with my wife, my grown kids and grandkids and great grandkids,” Gibson said. “[Maldonado] had worked for me before and she knows the shop and everything, so she’s the one.”

Gibson said Maldonado does not have any intention of making changes to the shop at the moment.

Spectrum Healthcare has recently acquired Internal Medicine at the Crossings in Prescott, welcoming Dr. Joseph Griffin and his practice to the Spectrum family.

Griffin has run the free clinic at the Salvation Army, in addition to his private practice in Prescott, since 1993. He is also the founder of Prescott Osteoporosis Testing Center. Spectrum at the Crossings is located at 3633 Crossings Drive and can be reached by calling 928-778-0330.

The MetLife Insurance Company office in Prescott has changed hands. Gary Baker, who ran the office for 26 years, has retired and passed the practice over to Tim Glover.

Since MetLife recently sold all of its agents to Mass Mutual, Glover has renamed the office Glover Financial.

“I’m still a broker for MetLife,” Glover said. “That was the big takeaway. The MetLife office didn’t really go away, it just sort of had to change because of MetLife changing.”

For the office’s clients, nothing has really changed during this transition, Glover said.