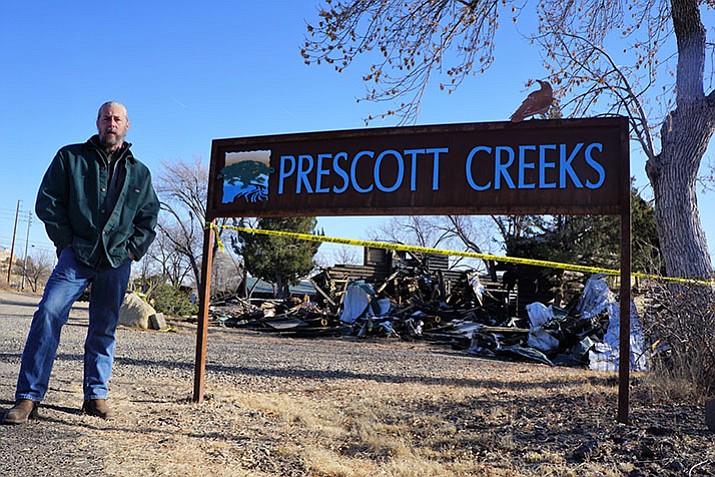 Since the Dec. 10 fire that destroyed much of the 1950s-era log cabin that housed the Prescott Creeks organization, Executive Director Michael Byrd has been working to salvage what he can from the wreckage. The organization has rented the high-profile office space along Highway 89 since late 2013. (Cindy Barks/Courier)

The nearly 60-year-old cabin that served as rental office space for the Prescott Creeks organization was a near-loss from a Dec. 10 structure fire. Executive Director Michael Byrd says the building depended largely on a fireplace with an insert, along with space heaters, for its heat. While Prescott Fire officials say the cause of the fire is still under investigation, the department included a warning about the use of space heaters in its press release about the fire. (Cindy Barks/Courier)

For nearly 60 years, the rustic log cabin has stood as a landmark along Highway 89, blending pleasantly into the nearby Watson Woods.

And for four of those years, the Prescott Creeks organization has tapped into that atmosphere, operating its creek-advocacy organization from the two-story cabin.

Indeed, the 1950s-era rental cabin located near the highway’s intersection with Rosser Street seemed tailor-made for the organization, which oversees the nearby Watson Woods Riparian Preserve.

That all came to an end Dec. 10, however, when a massive structure fire destroyed the log cabin.

The Prescott Fire Department reported that three engine companies, a truck company, a battalion chief, the Prescott Police Department, an ambulance, and other support personnel all responded to the fire. Crews worked for about nine hours.

But the building — with its hollowed-out logs, double roofs, and sawdust insulation — proved a tough challenge.

Ultimately, the cabin was a near-total loss. Drive by the Highway 89/Rosser Street site today, and all that is left is a pile of charred logs surrounding the remains of a chimney and rock fireplace.

Picking up the pieces

Over the past week and a half, Prescott Creeks has been dealing with the aftermath.

Executive Director Michael Byrd says the organization has been working to salvage items from the wreckage. One bright spot: Firefighters were able to retrieve the organization’s computer server, which appears to be intact.

Boxes of scorched files and old photo slides also were saved and are currently being stored in a nearby warehouse.

Still, Byrd said many of the organization’s irreplaceable documents, books, and periodicals were lost. “It was all in there — books to photos to computers to staplers,” he said, pointing to the wreckage.

Meanwhile, Byrd said the organization is working to stay on course in its mission to achieve a healthy watershed and clean water in the area creeks. “The creeks are still here, and the issues with water quality have not changed,” Byrd said.

In a news release this week, he emphasized a number of points. Foremost, he said, is that no one was hurt during the fire. 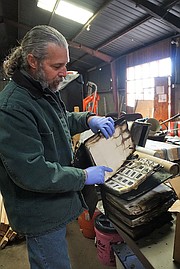 Salvaged items from the old log cabin that housed the Prescott Creeks organization are being stored in a nearby warehouse. Executive Director Michael Byrd says that while some items, such as scorched photo slides from the 1990s, were recovered, many others were destroyed in the Dec. 10 fire. (Cindy Barks/Courier)

In addition, the release stressed: “Prescott Fire Department responded promptly, and the fire crew was able to contain the fire to just the one building. Prescott Creeks was especially concerned with the potential for the spread of fire to the Watson Woods Riparian Preserve, which did not occur.”

In the wake of the fire, Prescott Creeks has moved temporarily into a vacant cabin that is located near the site of the old log cabin. “Prescott Creeks is here and operational,” the news release stated, while adding that the organization will need help getting back to full speed.

“While we are operational, it is at a decidedly diminished capacity,” Byrd said. For those who wish to help Prescott Creeks recover, a fundraiser is being planned for early January.

Until then, the organization is asking the community to make contributions to its year-end fundraising appeal (prescottcreeks.org/donate-now/). A list of specific items needed will be posted on the Prescott Creeks website (www.PrescottCreeks.org).

Although the cause of the fire is still being investigated, the Fire Department added a warning about space heaters to its press release.

“One thing learned during the investigation was that the business was in the habit of leaving space heaters on after employees leave the business at night and on weekends,” the release states. “Space heaters are meant to heat spaces that people are in. Space heaters should not be left on when a building is not occupied.”

The release added: “The heater may have played no part in the starting of this fire; this is simply a safety reminder to not leave portable space heaters on and unattended.”

Byrd noted that the log cabin relied largely on a large fireplace with an insert, as well as space heaters, for heat. The cabin was built in the late 1950s, and used a process known as “air-locked” logs, which involved hollowing out logs as an insulation technique.

“The log operation was based on this site, and our understanding was they built these cabins as models,” Byrd said, noting the air-lock company sold kits for assembly elsewhere. “Back in the ’50s, the hollowed-out logs were said to be an insulation.”

The company later moved its operation to New Mexico, but the half-dozen or so buildings remained, and were rented out over the years for use as homes and office spaces.

Prescott Creeks had been renting the building since late 2013. Currently, Byrd is looking at new office space, but one day hopes to return permanently to the creek-side spot.

“We’re looking at a variety of options,” he said. “It was this location that was the real attraction, and it would be ideal if we could be back on this site.”