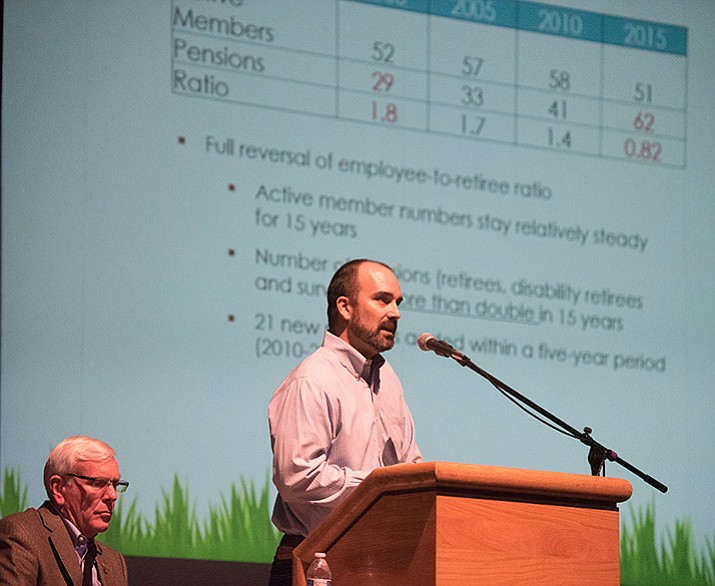 The good news: 2017 is perhaps the last year that the City of Prescott’s unfunded liability with the Public Safety Personnel Retirement System (PSPRS) will grow.

The bad news: The city’s level of debt in the public safety pension system now totals about $86.4 million — up nearly $8 million from the $78.5 million liability in the previous year.

Meanwhile, the coming State Legislative session is expected to include a bill that could help the city deal with continued impacts from the 2013 Granite Mountain Hotshot tragedy.

The status of the PSPRS was the topic of two council discussions on Tuesday, Dec. 19 — a report from Budget and Finance Director Mark Woodfill on the city’s current unfunded liability; and a legislative discussion by State Rep. Noel Campbell and the city’s lobbyist Barry Aarons.

• He pointed out, for instance, that the new liability number does not reflect the $11.6 million that the city paid to PSPRS in September to bring down Prescott’s unfunded liability.

That payment came after the end of the past fiscal year, and will be included in next year’s unfunded liability numbers, which are expected to be released by about November 2018.

In the meantime, the city also plans to pay millions more in the current fiscal year from the revenue generated by a new 0.75-percent sales tax that voters approved this past August.

That tax is set to go into effect on Jan. 1, and will run for 10 years, or until the city’s unfunded liability is down to $1.5 million or less.

• Woodfill also noted that the city had predicted that the unfunded liability would go up this year. “It’s higher than last year, but we knew it was going to be higher,” he said.

And a number of factors made this year’s increase even higher than usual, Woodfill added.

One of those “significant actuarial changes” involved the mortality tables that PSPRS uses to predict pension liability levels. The tables were updated this year to more accurately reflect current life expectancy.

In addition, the long-running Parker/Hall lawsuits were resolved in the courts — overturning aspects of the pension reform approved by the state in 2011, and requiring employers such as the City of Prescott to make reimbursements to pension recipients.

The $86.4 million unfunded liability estimate is based on a draft by PSPRS, and Woodfill said the final numbers are expected to be released on the PSPRS website (http://www.psprs.com/) in the coming week or so.

Along with the report from Woodfill, the council also heard updates on coming legislative issues from Campbell and Aarons.

Both mentioned the possibility of a bill that would aim to devote additional state money toward Prescott’s pension costs for the fallen Granite Mountain Hotshots.

Aarons cautioned, however, that the $8 million that is being considered will be “a tough ask” at the legislature.

After 19 Granite Mountain Hotshots died fighting the Yarnell Hill Fire in June 2013, the State Legislature agreed to put $5 million toward the cost of pensions for the six Hotshots who were considered permanent employees.

After that, however, survivors of several of the Hotshots that the city had said were seasonal/temporary employees and not in the PSPRS system won pensions as well.

Woodfill said after the meeting that a bill is being considered that would seek an additional $8 million or so toward helping to cover the costs for the Hotshot survivor pensions.

Aaron told the council, “That is going to be a tough ask, because it’s a lot of money. But he added, “I think the commitment is there.”

Campbell, who headed up an ad hoc legislative committee on the PSPRS this past year, said one of the ideas that arose during those meetings likely would not become reality.

“That idea of a constitutional amendment didn’t pass muster,” he said, referring to the earlier push toward asking voters to amend the state constitution’s pension clause that states: “Public retirement system benefits shall not be diminished or impaired.”

“That was a bridge too far,” Campbell said of the move toward taking the amendment to the voters. “There’s no desire in the legislature for that to happen.”

Among the recommendations of the ad hoc committee, Campbell said, were: to continue the committee in the next legislative session to inform the public; and to seek an independent audit by the attorney general’s office on PSPRS’s operations.