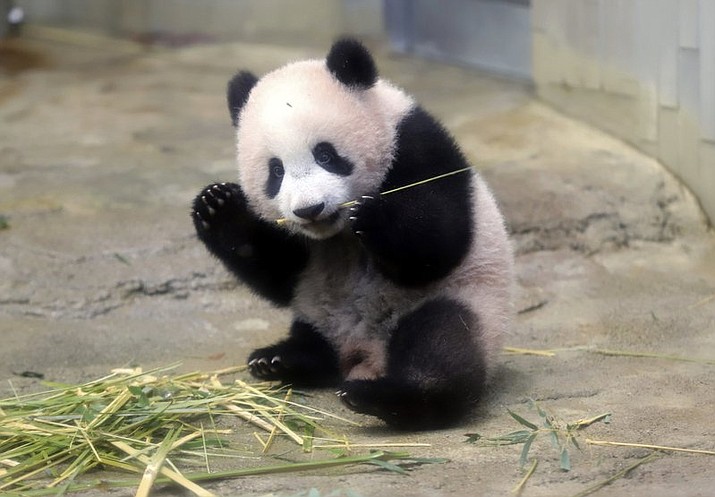 Female giant panda cub Xiang Xiang eats bamboo during a press preview at the Ueno Zoological gardens in Tokyo, Monday, Dec. 18, 2017. A baby panda made a special appearance Monday before Tokyo’s governor, a group of local schoolchildren and the media one day ahead of its official public debut. Xiang Xiang, a 6-month-old female giant panda, will debut Tuesday in a limited public viewing for avid fans who obtained tickets through a highly competitive lottery process.(Yoshikazu Tsuno/Pool Photo via AP)

Xiang Xiang, which means fragrance in Chinese, was born in June at Tokyo’s Ueno Zoo to its resident panda. It’s a first one in 39 years to have been born in Ueno, known as a panda town. (Yoshikazu Tsuno/Pool Photo via AP)

Xiang Xiang, which means fragrance in Chinese, was born in June at Tokyo’s Ueno Zoo to its resident panda. The zoo and its neighborhood have celebrated the female panda’s healthy growth, especially after the death of a days-old baby five years ago.

“Kawaii (cute)!” screamed many visitors, their voices filling the panda house during the 2 ½ hour viewing session, as Xiang Xiang crawled on the ground, followed its mother Shin Shin, climbed a tree and played with bamboo branches. The visitors held up smartphones trying to capture every antic of the slow-moving baby panda during their less than 10 minutes of viewing time.

In this photo, children watch panda goods at an open-air market at Ameyoko shopping district near Ueno Zoo in Tokyo. (AP Photo/Shizuo Kambayashi)

Many visitors decorated themselves or their children with panda motifs on hats, scarves and even shoes and jackets, or wore black-and-white jackets. In and outside the zoo, panda goods of all kinds were on sale, including stuffed panda dolls, cookies, sweet buns and bread. Some shopkeepers wore panda costumes.

Only 2,000 people were allowed into the panda house, with tickets distributed through a lottery. Zoo officials said Xiang Xiang’s public appearances will be limited for the time being to minimize the stress.

Japan’s baby panda now has a name: Xiang Xiang, or fragrance
10 Thing to Know for Today, Dec. 18, 2017
Panda romance in the air at Berlin zoo, but love takes time
Last 2 pandas at San Diego Zoo to leave for China
Pair of Chinese giant pandas get snowy welcome in Finland