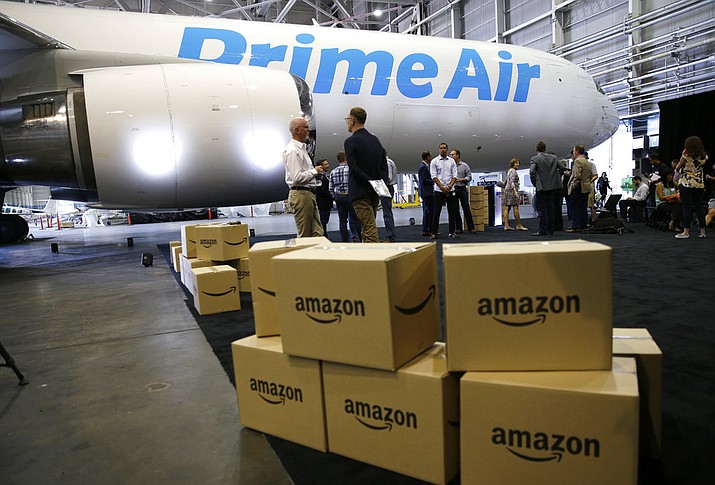 In this photo, Amazon.com boxes are shown stacked near a Boeing 767 Amazon "Prime Air" cargo plane on display in a Boeing hangar in Seattle. With Christmas 2017 on a Monday, most retailers have one less day to get packages delivered on time. Retailers have been trying to speed up delivery as they try to replicate the service offered by Amazon. (AP Photo/Ted S. Warren, File)

NEW YORK (AP) — A calendar quirk this year and Amazon's seven-days-a-week delivery capability are building pressure on retailers to deliver.

With Christmas on a Monday, most retailers have one less day to get packages delivered on time. Some are pushing up their deadlines for standard delivery or free shipping. And after promoting the convenience of buying online with store pickup, retailers are also trying to satisfy lots of customers coming in to collect their orders.

It's especially important for retailers to hit the mark after some missteps earlier in the season, and because online leader Amazon has the advantage of delivering on Sundays. Research firm StellaService says Dec. 19 is the most popular cutoff date for retailers, two days earlier than last year. Amazon Prime members, meanwhile, get same-day delivery up until Dec. 24 in 8,000 cities.

Retailers have been trying to speed up delivery as they try to replicate the service offered by Amazon. But UPS said this month that some package deliveries were being delayed because of a surge of orders from online shoppers after Thanksgiving. And Walmart said around the same time that more online buying created delays in some orders.

Holiday spending is turning out to be stronger than expected, putting more pressure on stores to get it right.

"I am not very impressed," said Sheryl Matson of Mount Gilead, Ohio, who has run into problems twice already.

She ordered a PS4 game console on the Kohl's website two days before Thanksgiving, and the next morning received an email that her order was cancelled. She got on the phone to resolve the issue and got Kohl's Cash, similar to a gift card, for her troubles. A few days later, she ordered four items on the Kohl's website for in-store pickup at two places. At one location, one of the three items was missing; at the other store, the product — a digital coin collector— was the wrong color. She says she spent two hours on the phone and $20 in gas money to try to get it fixed. She had to keep the incorrect color, but did receive another $20 in Kohl's cash.

Now, she's buying the rest of her gifts at stores: "You see that the merchandise is actually there, instead of relying on their system."

Kohl's has actually carved out space for Amazon shops in some of its department stores, where shoppers can find Amazon devices and return items they bought from the online retailer.

Overall, retailers are wrapping their arms around e-commerce fulfillment but "are still struggling," said Alex Vlasto, vice president of marketing at StellaService.

The company found a marked decrease in how quickly retailers responded to queries from customers via chat message or phone during the first big shopping weekend of the season. For the 30 retailers it monitored from Thanksgiving to Cyber Monday, the average response time from a live customer service representative was more than three minutes, compared with less than two minutes a year ago. Responses via chat took nearly two minutes, compared with just over a minute a year ago.

Delivery has been one of the biggest battlegrounds as online shoppers seek speed and convenience.

Target said this week it is paying $550 million to buy Shipt, which charges members $99 a year and sends people out to choose and deliver groceries from stores, after earlier this year buying a delivery logistics company to offer same-day service to in-store shoppers in New York City.

Many retailers are making more of their online items available for shoppers interested in picking them up at the store. Walmart says it expects demand for in-store pickup of online orders to double during the final two weeks of the holiday season.

Donald Morgan of Pittsgrove, New Jersey, doesn't plan to be among those customers. He's going to a mix of stores and using Amazon after having to wait 15 minutes in line to pick up online orders at Walmart, Target and Best Buy last holiday season.

"It's more aggravation than it's worth," Morgan says.

Amazon to bring 1-day delivery to Prime members
Walmart and Google team up to challenge Amazon
Faster delivery of nearly everything is the next big thing
Step back, Santa - Delivery services are after your job
Amazon or Walmart? Some retailers are choosing alliances